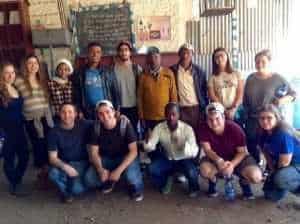 Considered by many to be the cradle of human history, our trip to Ethiopia will combine history, culture, food and Zionism. We will be based in Addis Ababa, the capital of Ethiopia and the place from which every Ethiopian Jew made Aliyah to Israel. We’ll learn about their claims to be one of the “lost Tribes of Israel” and how the Israeli government mounted two operations, Solomon and Moses, to bring them all home. We’ll visit the Israeli Embassy and experience the work of MASHAV, which brings Israeli expertize to the developing world. We’ll also spend time with a Jewish doctor who has dedicated his life to saving thousands of people in Ethiopia. All this, whilst seeing the oldest humanoid, tasting Ethiopian food, experiencing traditional singing and dancing, African wildlife, and some African villages. This will be a truly unique and eye-opening experience.

Please note: Participants are required to be immunized against yellow fever prior to the trip. We recommend that participants also consult with their personal doctor to determine if other vaccinations are prudent. The cost of vaccinations are not covered by Aardvark or the insurance provided by the program. 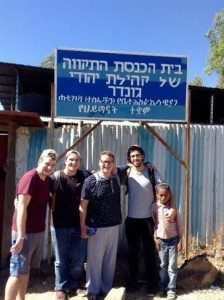 We land in Addis Ababa and transfer immediately to our flight to Gondar in Northern Ethiopia. The greater Gondar area is where the majority of the Jews in Ethiopia lived for centuries until they made Aliyah to Israel. We will visit the Beta Israel Compound and see how these Jews lived, hear their stories, see their school and the JDC Solomon Clinic. We’ll start to understand the amazing story of Ethiopian Jewry and its mass Aliyah to Israel. The rest of the day we will start to discover the city of Gondar. Many picturesque ruins lie in the royal enclosure like the fairytale castles dating back to the 17th century. The castles reflect the glory of Gonderine kings and characterized by lime-mortar style.

The other place of interest is Fasiladas pool, in which pilgrims still take a plunge during the Timket (Epiphany) celebrations. We’ll also visit Debre Birhan Trinity Church, rewarding for its magnificent murals adorning the roof and the walls of the church. In the evening, we’ll have a dinner of authentic local cuisine and enjoy live Ethiopian music and Tej – the traditional, unique Ethiopian wine, made from Honey. We will stay overnight at the Gondar Goha Hotel.

Today we will visit the Falasha village of Wolleka, where we will visit the Jewish Cemetery and a mud-hut synagogue and again understand what Jewish life was like in Ethiopia. We will then continue onto the Semien National Park, one of the most spectacular landscapes in the world and listed by the UNESCO as a world heritage site. The Semien chain of mountains is the steepest and most precipitous on the continent and is often compared to the Grand Canyon of Arizona. Its highest peak, Ras Dejen is 4,543m above sea level, which makes it the fourth highest mountain in Africa. We’ll have a nature walk / drive and enjoy the dramatic scenery along with inhabitants of the area including the gelada baboon and a staggering number of bird species. We will again stay overnight in the Gondar Goha Hotel.

On this day, we will leave Gondar and fly to Lalibela. We’ll spend the day discovering one of Ethiopia’s most special sites – the city of Lalibela/ancient city of Roha. Civilization of the past is still alive in the form of strange and beautiful monuments and ruins. The 11th century rock hewn churches of Lalibela reveal a marvelous and skillful architectural knowledge of the past. These incredible edifices remain places of living worship to this day and no one visiting here can fail to be stunned and awed by the remarkable human achievements that the churches represent. We will start the day from Bet Medhane Alem, one of the largest monolithic rock-hewn churches. Bet Maryam, is thought to have been the first church built in Lalibela and features elaborate carvings. We’ll work our way around the site and in the afternoon we will explore the local open market. We’ll then watch the sunset, before heading to our hotel for dinner, which will include traditional food, a folk show and coffee ceremony. 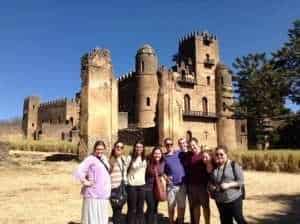 We’ll fly to Addis Ababa in the morning and begin to discover the city. Founded in 1886 by Menelik II, Addis Ababa in Amharic means “new flower,” and it is a pleasant city with wide avenues of jacaranda trees, interesting museums and one of the largest open-air markets in Africa, known as the “Merkato.” We’ll visit the major sites, including Lucy – the earliest known humanoid skeleton – and then interact with the Kechene Jewish community (Beta Avraham) of Addis Ababa.

In the evening, we’ll experience some traditional Ethiopian dancing and then hit a modern club. We’ll stay overnight at the Yaya Village Hotel.

Not many people know about the Kechene Jewish Community. These Jews share ancestral origins with the Beta Israel and, like those Ethiopian Jews, most of whom are now in Israel, they observe pre-Talmudic Jewish practices. Separation of the Kechene Jews from the Beta Israel, however, began around 1855 when the community moved from its traditional village homes in the Gondar region of Ethiopia south to the North Shewa region. The community played a pivotal role in the establishment of the capital, Addis Ababa, providing crafts and manual labor. But despite their economic importance, they were regarded with distrust, fear, and at times, even hatred because of their Jewish faith. Faced with extreme persecution from their Christian neighbors, they lived as strangers in the region and were denied basic rights such as the ownership of land, which was granted only to those who accepted the Christian faith and underwent baptism…

…To ensure the survival of the community and its continuity to the next generation, and to minimize persecution and gain access to burial grounds from the church, the elders instructed the community to abide by the following rules:

Here was a large Jewish community (some say over 150,000), who felt forced to live underground like the conversos (crypto-Jews) of Spain. Nowadays, they are trying to re-establish their connection to the World Jewish community and we’ll visit them and hear their story. Listen to some of their songs.

On our final day, we’ll visit the Israeli Embassy and meet the Ambassador, Belyanesh Zevadia, who is the first Ethiopian-Israeli diplomat to represent Israel in any of its missions. She’ll tell her personal story and talk about Israel’s relationship with Ethiopia. We’ll also meet the Director of Mashav projects there. Mashav is Israel’s Agency for International Development Cooperation in the Ministry of Foreign Affairs. Mashav is responsible for the design, coordination and implementation of the Israel’s worldwide development and cooperation programs in developing countries. MASHAV believes that its greatest possible contribution to developing countries can be made in fields where Israel has relevant expertise accumulated during its own development experience as a young country facing similar challenges. We’ll hear all about the projects Israel has in Ethiopia and how it is contributing. Finally we’ll have lunch with Dr. Rick Hodes, a Jewish American doctor who has worked in Ethiopia for the last 30 years. He is also the father of Dejene, an Aardvark Alum, who is coordinating our trip in Ethiopia. Dr. Hodes was the main medical consultant during the mass Aliyah of the Jews from Ethiopia and he will share his experience of those amazing events, whilst also sharing his own story. He is a truly remarkable man and was selected as a CNN Hero a few years ago. HBO also made a documentary about him, entitled “Making the Crooked Straight”. Then after lunch we’ll head to the airport to fly home to Israel.

Ethiopia conjures up all sorts of images for people: Ethiopian priests, starving children, stunning landscapes and ancient cities. For us, it is the images of the Lost Tribe of Israel coming home. Tens of thousands of Jews made Aliyah from Ethiopia in the last two decades and changed the face of Israel today. Israel maintains strong ties with Ethiopia and we’ll learn all about that relationship and the future it holds.