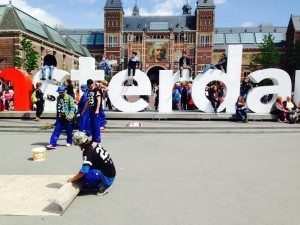 OK the official name is the Netherlands but if we wrote that we were not sure everyone would know what country we were talking about.  Holland is a country of many powerful images:  windmills, tulips, wooden shoes, dykes, canals, etc.  Something has to be said for a country that fights so hard against the sea to claim land for its inhabitants. Jews first came to Amsterdam around the year 1600, many escaping from the Spanish Inquisition and thrived in a city famous for its religious tolerance.  The Dutch Jewish community was strong and proud until the Nazi take-over in WWII and the collaboration of many Dutch lead to 75% of the population murdered.  Since then Holland has been at the forefront democracy and has some of the most tolerant and inclusive laws in the world.  The country has been supportive of Israel.

Walk the quaint cobblestoned streets of Amsterdam. Begin your day at the world famous national Rijksmuseum where you will see paintings from the Dutch Golden Age and in particular Rembrandt’s Night Watch (and if you don’t know what this is you better Wiki quickly).  Continue your high culture with a visit to the Van Gogh Museum which happens to be the Aardvark Director’s favorite museum in the world. Also it is important for you to learn how to really pronounce the name Van Gogh.  Now that you have your dose of high culture out of the way, it is on to the Heineken Experience Museum where yes, you get to taste the beer.  Since this is a city of many canals we will take a romantic cruise around the city as the sun is setting. 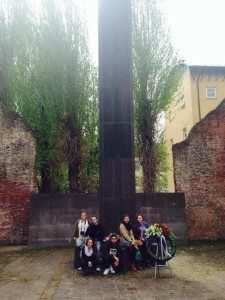 Begin the day at the Jewish Historical Museum.  The museum inhabits four restored 17th- and 18th-century synagogues, the exhibit tells the intertwined story of the Jews and Amsterdam, since the 17th century.  Continue to the Portuguese Synagogue and learn about the impact of the Spanish Inquisition on the Jewish people.  This huge synagogue dates from 1675 and is still in use. This synagogue shows that the Jews were tolerated in Holland and did not have to hide their religion.  Today the officers of the synagogue still wear top hats during the service.  Just outside the synagogue is Waterlooplein, a long-running, open-air flea market that was the central 19th-century market for the Jewish community.  Today it is better known for cheap CDs and blue jeans.  Next we move onto the story of the Jews during WWII and a visit to the attic that Anne Frank hid in with her family.  This will be followed by a visit to the Dutch Resistance Museum and a visit to the Auschwitz Memorial where we have a ceremony to honor the victim’s memory.  To change the mood a bit we will visit FOAM which is a museum dedicated to cutting edge photography. In the evening attend a performance of Boom Chicago.  This is a an English speaking improv and comedy troupe.

See famous people…in wax version…at Madame Tussaunds Museum.  Then move onto the Amsterdam Dungeon which is a fun way to learn that not-so-nice Dutch history about plagues, witches, the Spanish Inquisition, etc. Next visit the House of Bols Cocktail and Genever Experience.  Here you will see how hard alcohol is made (yes there is free taste tasting) as well as the art of flair bartending, similar to that of Tom Cruise in the movie Cocktail.  If this day is not decadent enough walk through Amsterdam’s Red Light District and have a discussion about the pros and cons of Holland’s approach to liberal democracy.  Stop by the Erotic Museum which will be an eye-opening experience.  In this light, visit the Hemp Museum where you can see the many uses of the plant that are actually legal in the world.  And the fun continues later when we will go to the Museum of Bags and Purses considered one of the top fashion museums in the world.  In the evening you will have a chance to experience the night life of Amsterdam.

Day trip to the capital of Holland, The Hague.   Your first goal is to learn how to pronounce the city name which sounds nothing like how it is written in English.  Visit the Government complex and learn about Dutch democracy.  Then visit the Israeli embassy to learn about Holland’s generally strong relationship with Israel.  See some confusing and amazing art in the Escher Museum (are the people going up or down those damn stairs?)  Next, visit the infamous Prison Gate which is basically a museum about torture methods in the middle ages.  Finally no trip is complete without seeing Madurodam, a miniature version of Holland.  In the evening, we head back to Amsterdam where we meet local Jewish youth to hear about their lives in this country. Go to a super cute desert café in the evening and it is compulsory to order ‘hagelslag’ – a non-pronounceable Dutch word that refers to what we think of as chocolate sprinkles.  See how the natives eat them! 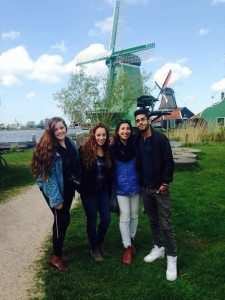 And now for the Dutch countryside you will head out to see windmills and dykes for the day.   In the area of Volendam and Edam you will see a wood shoe factory (and perhaps buy a pair) and a windmill factory.  You will visit the traditional fisherman’s village where some of the locals still wear classic Dutch costumes.  And of course there is a cheese factory where you will get to go wild tasting all sorts of cheeses.

Going to Holland is to delve into contradictions.  It is a friendly, fun country.  The Jews live freely there. Yet they have a dark past.  The empty synagogues attest to a society that failed to protect the Jews in WWII.  Their liberal immigration policies today are fostering a resurgence of anti-Semitism due to Moslem extremism.  This is a country that had a far right-wing party that was headed by a homosexual and was killed by a Moslem.  It is a country that accepts gay marriage, has equal rights for women, legalized prostitution, and tolerates drugs.  And although they support Israel there are many in the parliament that lean towards the Palestinian cause even though democratic rights in the Palestinian Authority contradict Holland’s view of democracy. This is the last trip of Aardvark International and will conclude our journey into the world by raising even more questions about our role as Jews in the world and the future of Israel.