Student of the Week – Benji Pincus

Hi, my name is Benji Pincus and I am from Johannesburg, South Africa. I grew up in an Orthodox Jewish home and went to a Jewish school and for a long time, I have known that I wanted to do a gap year in Israel. In 2016, my brother did his gap year with Aardvark Israel and I knew I wanted to do the same because Aardvark gave him the opportunity to live and have free time in Israel as well as having structured programs. Since Aardvark, he has thrived in his studies at university and has matured all around, which I wanted to see for myself. I also liked the fact that I would branch out from my friends back home and meet new friends from around the world. So, after I finished high school in South Africa, I went to Tel Aviv to start my first semester!

I arrived in Florentine where I met my roommates – Micah, Liad, Solly and Tristan (also Ruby). Avia was assigned as my madrichah, which reaffirmed my belief in G-d because she was/is the best and most understanding madrichah I could have asked for. Very quickly, I found myself a part of the Aardvark family. Also, very quickly I learnt how much I took for granted at home, things such as cooking and cleaning. From a person that can hardly pour milk into cereal, it was a bit of a shock to learn how the oven worked. Lucky for me, my roommates guided me and taught me how to make essentials such as pasta and rice, and more complex recipes such as chicken wings. Besides, for my roommates, the other kosher apartment (I didn’t mention I was in a kosher apartment) and our apartment did practically everything together from chills, parties, Shabbat dinners and burger nights. If I could, I would write an essay about all the memories I shared with each person on Aardvark. The last day saying goodbye was probably one of the hardest days of my life and there were tears… lots of tears.

A handful of Aardvark students including myself decided to do Aardvark Plus, which was a trip to the States and becoming a camp counsellor at an American summer camp. All of the Aardvark Plus peeps went to Washington and New York. From there we all go to Pennsylvania for our respective camps. Luckily, another South African, Gadi, and I had two weeks before camp started so we went to stay at our friends in Boston. This proved to me that our friendships last forever on Aardvark and we were taken into their homes as family. From there, I went to Camp Nesher, a modern orthodox camp. This was a real learning experience as I really learnt responsibility. I also learned what not to do when a kid breaks his wrist in front of you: Do not panic and do not say that looks disgusting… I learnt that the hard way. All around, my experience in the United States was meaningful but I really missed Israel and that is when my second semester in Jerusalem came around.

Arriving at the new apartments in Nachlaot was a major upgrade to the old ones in Katamon (I know, I stayed over a couple of times).  Living in Jerusalem, I love how different it was to Tel Aviv. It is a lot more chilled (and cheaper) than Tel Aviv. Upon arriving, I was greeted by my old friends, Charlee and Natalie. Charlee and I had been keeping in contact over my time in summer camp and had been discussing the Jerusalem semester. Also, she gave me the best internship I could have asked for, Jewlicious, where I help the owner, David, find content and help him all around with tasks for the website. The best activity I did with him was where we went to the Temple Mount to film around and take pictures and give an accurate account of the history of the place. I could not go on without mentioning my madrich, the pickle master, Tomer. (If you did not get that, he lives on the kibbutz, Beit Hashita known for their olives and pickles.) I love talking with him and joking around and he has truly helped me this semester. I loved meeting a new set of people that were significantly different to the last semester but as each day passed I slowly realised that my time on Aardvark was coming to an end. I couldn’t have imagined a better gap year where I have grown significantly and became a better person. I have learnt a lot about the world around me and about myself and I feel I am ready to see how I succeed in college. 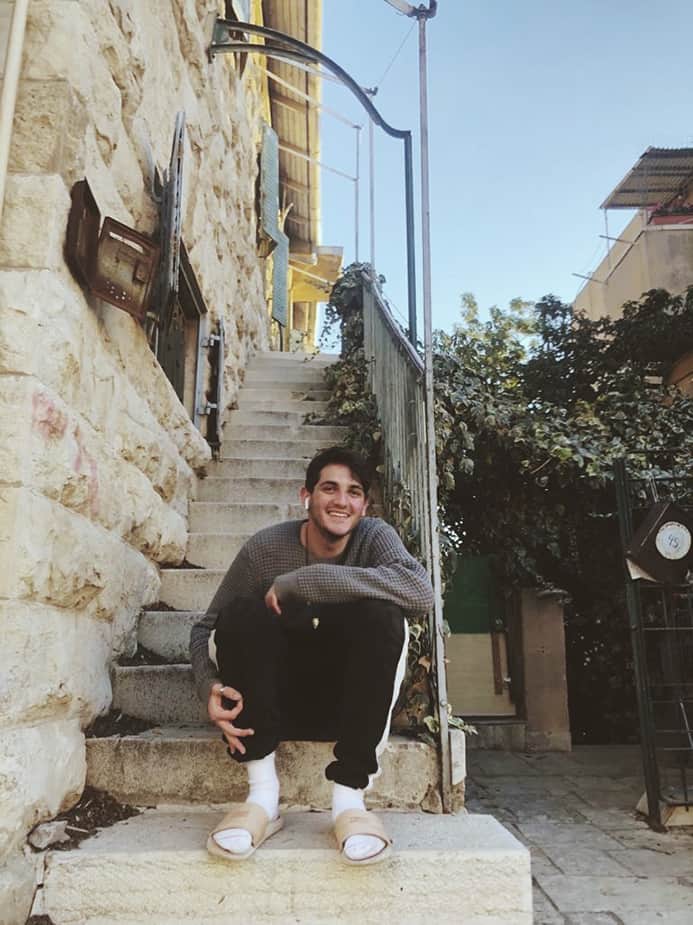