Time is flying and this week we reached the three-month mark! Three months and the students have learned and experienced so much, and we are so proud of them! Continue reading to learn all about their adventures this week!

On Sunday evening, we had an activity about how it feels to be an insider and an outsider in a group. How that would affect us and how it would make us feel and act differently depending on the group we’re in. We also talked about how we can spot these different behaviors in ourselves and others and what we can do to make those who feel left out become an insider like us. This activity is connected to the holiday that was celebrated on Tuesday – the Sigd.  The Sigd is a holiday celebrated by the Ethiopian Jewish community.  The Ethiopian community, after making Aliyah, faces racism and it is sometimes excluded from inside the Israeli community. Even though they are Jewish, some people question their Jewishness.

On Monday Evening, we made clay chanukiot (menorah). The word “menorah” is Hebrew for “lamp,” and generally refers to either the seven-branched golden candelabra that was lit every day in the Tabernacle, and then the Holy Temple in Jerusalem, or the eight-flamed lamp that is lit on the eight nights of the Jewish holiday of Chanukah.

Everyone was super creative; we played Chanukah music and started to really get into the holiday spirit. We are all really looking forward to lighting the menorahs we made on Chanukah now!

Xander Morgenstern said, “I enjoyed making a clay menorah because we were allowed to be imaginative & I was able to make an original menorah that I can keep forever.”

On Tuesday’s Tiyul, the students went to the city of Abu Gosh with the organization Hinam. We had the honor to be joined by Dr. Paul Zolty (father of Jerusalem student Yitzi Zolty) and Dr. Zolty said the following about today’s Tiyul, “As a parent it was wonderful to see my son and meet some of his new friends and the group he is with and I appreciated the opportunity to see a possible future for our people.

I have been to Israel a few times in the past and have never been to an Arab village. I was previously reluctant and frustrated that even in Our land potential danger may accompany going to one. One has to be cautious and I feel it should not be so and I was vexed that it is. Hence, previously I have been reluctant and disinclined to do so.

One wants to imagine a future for our children that is safe, fulfilling and allow for a full and productive life, both for them and others that live into our collective future. It has been often said that human ingenuity can make anything happen: If you can at least imagine it, it can be done. Prior to this visit I couldn’t think of or imagine an elective solution to the future of this complex land, and felt our survival may force us, in order to remain safe and to flourish, to make yet harder decisions and less charitable interventions than we have pursued in the past as a nation. However, this afternoon opened up a view to a possible coexistent future. I am not sure it is currently practical but it is certainly possible. It is one that can be imagined and therefore possibly created. The guides were knowledgeable and explained the history of the village of Abu Gosh. Abu Gosh is located 10 kilometers (6.2 mi) west of Jerusalem on the Tel Aviv-Jerusalem highway. While it was first founded in 7000 bce, more recently it was settled in the 16th. Century by 4 Sunni Muslim brothers from Chechnya (with whom the community here remains connected). During our first and second Aliyot the community was supportive of Jewish immigration. In 1920 they hosted Chaim Weizman, and during the war of independence while a siege of Jerusalem was in effect the village was different to all the other surrounding villages: they were only one of the 36 Arab villages that remained neutral and did not attack Jewish siege breaking transports into Jerusalem. They even helped at times keep the road open and provide supplies. Few if any of those other villages remain but for Abu Gosh, now a local tourism draw for foreigners and Jerusalemites. They remain a model of coexistence. About 500 Jews live amongst the Arab villagers in harmony and the town borders on a Chareidi community and two kibbutzim peacefully.

The organisation hosting the visit (Hinam) promotes grass roots interaction by having participants take the viewpoint of an invited guest: The locals invite interaction and hence do not feel “observed” but rather get to educate and interact and have the opportunity to engage Israeli society, as important to their youth as to ours. Being a guest rather than a tourist engenders appreciation, respect and open mindedness rather than judgment and superiority.

We were invited into a Christian Women’s monastery (located where the Holy Ark was purportedly held for some time), a Muslim mosque and a Jewish Beit HaMidrash.

Lunch was followed by the teaching of our youth by four Arab 20-somethings of an Arab Debka, the dance steps connecting their youth to their ancestors.

I saw the kids (theirs and ours) dancing together in a Jewish Beit Midrash in an Arab village, in a circle , boys and girls, Arabs and Jews, all about the same age with smiles on their faces.

To me this represents a taste of what can be done. A glimpse of what the future can hold.

One of the guides told me in conversation something with which I wholeheartedly agree. In the end what most of us want (Them and Us) is just to be able to live and work and be able to play with our kids and watch them grow up to do the same.

To see that that can be done makes me appreciative of a possible future and my heart is filled with hope.”

On Tuesday Evening, we had a guest speaker come for our Faces of Israel activity. Moshe David, our Madricha Tamar’s father, came to talk to us about Operation Solomon, a covert Israeli military operation to airlift Ethiopian Jews to Israel from May 24 to May 25, 1991. Non-stop flights of 35 Israeli aircraft, including Israeli Air Force C-130s and El Al Boeing 747s, transported 14,325 Ethiopian Jews to Israel in 36 hours. Moshe was an IDF air force pilot for 15 years and was a part of the team that planned and led the operation. We learned about the history of the Ethiopian Jewish community, about the aerial aspect of the operation and heard some personal and touching stories firsthand from a person that was there. It was an honor meeting and hearing such an interesting and impressive story.

Benji Pincus said, “It was really interesting to hear a firsthand account of what transpired during Operation Solomon. It made it all that more personal that Tamar our Madricha’s father was the one telling us his story with the Operation. I definitely learned a lot more than I thought I knew already about this moment in history.”

On Thursday, after internships and mini apartment meetings, we met in the Moadon for our first Thanksgiving in Israel. We want to thank the culture committee for planning such a feast! A special thank you goes out to Lana Stern, Eliana Cohen, Aliya Markowitz, Ella Newell, Ben Newman, Jono Levit, Charlie Dolin and Madrich Rafi Goldstein for cooking and planning activities for our Thanksgiving meal. After eating all the delicious food (made with so much love), Jono Levit shared his family tradition from back home with his new Aardvark family. Each student was handed a piece of paper, everyone wrote what he or she were thankful for, and we had to guess who wrote it. There was a lot of laughter guessing who wrote what and a lot of gratitude in the room for one another.

To end the evening, we ate apple pie and pumpkin pie (made with even more love and marshmallows) and Ben Newman’s famous snickerdoodles! It was a beautiful night; we were so lucky and are so appreciative to have spent it with each other. The evening ended with the American National Anthem and Hatikvah.

Galya Wornovitzky said, “Thanksgiving this year was extremely fun. It was my first Thanksgiving I celebrated (I’m from Canada) and I’ve never been more happy than to share it with Aardvark. Stepping into the decorated room and trying all the thanksgiving traditions was a wonderful experience. We played games and said what we were thankful for as well as ate delicious food. Thanks to everyone who planned this amazing night and made the food!”

This week on Selah: This week in Selah we addressed the popular and important message of “Love your neighbor as yourself.” We approached this topic in two experiential ways.  On Monday, we set out on a light morning hike to the Aminadav Forest, which is located in the Judean hills right outside Jerusalem. We learned about the JNF, American – Israeli relations, and the impact of this relationship on the land of Israel. We concluded our hike with a learning session at Yad Kennedy. A memorial at the peak of Aminadav Forest dedicated to John F. Kennedy.

On Thursday morning, we ran a session on Jewish sects to help prepare us for our November Shabbaton in Kibbutz Hanaton. We then participated in a Bibliodrama workshop with Yael Unterman (http://www.yaelunterman.com/) who took us through an interactive journey of exploring what it’s like to be “the other” in the biblical story of Joseph and the contemporary story of the Ethiopians. We are really looking forward to a fabulous Selah Shabbat in Hanaton!

Internship in the Spotlight: Hi! My name is Leah Matthys and I’m from Arroyo Grande, California. Betsy Weill, Ariana Baskin and I volunteer at the YMCA gan, called Peace Preschool. Peace Preschool is a very special place. In every classroom, there is a Hebrew and Arabic speaking teacher, so the kids are exposed to both. Many of the children at the gan come from foreign families, so there are children speaking Arabic, Hebrew, English, and even Italian or Chinese. It is so cool to sit in the class and hear all the different languages being spoken, and to see the peace building process start at such a young age. I am learning so much Hebrew and Arabic here and also getting to watch how the Israeli-Palestinian conflict is being mitigated through just being able to communicate. I am so thankful to get to learn about how to work with kids in such a special way.

Next week, we will be visiting and touring Chevron, we will be having Ted Talks prepared by the students, Café Ivrit and more! 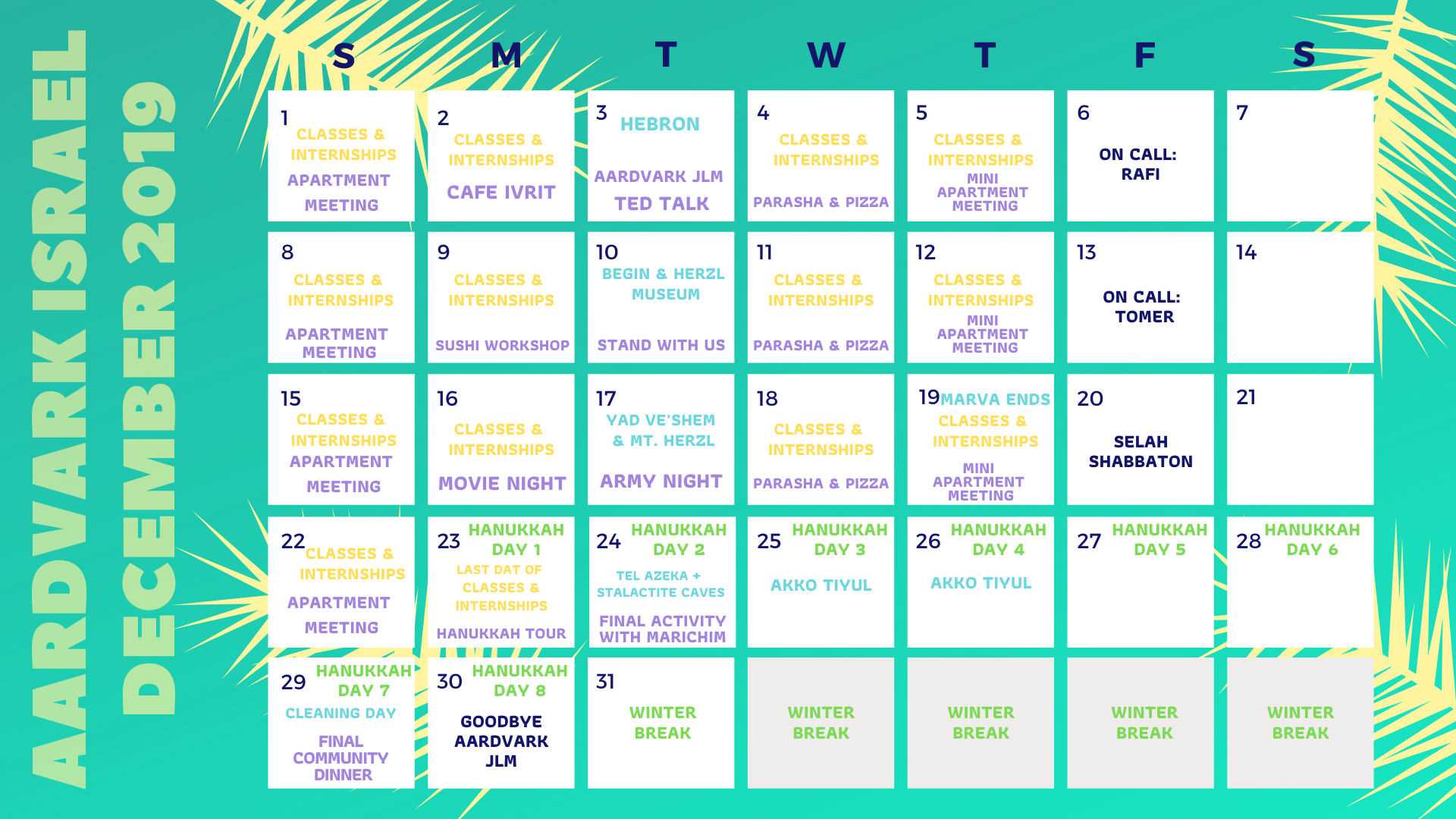 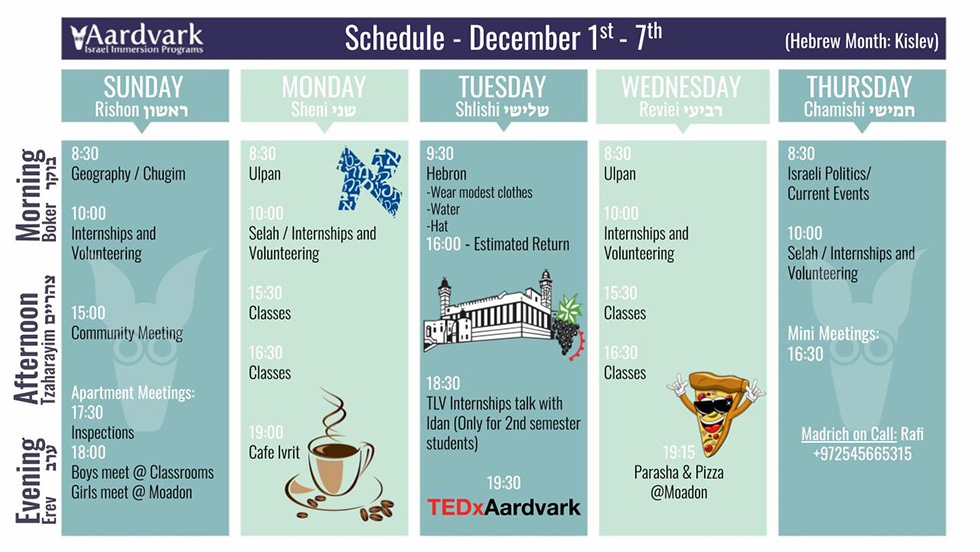 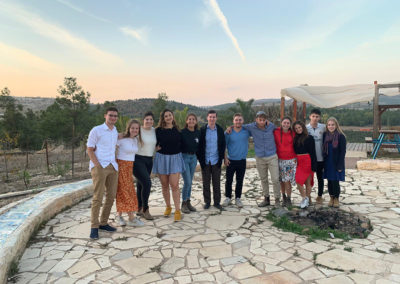 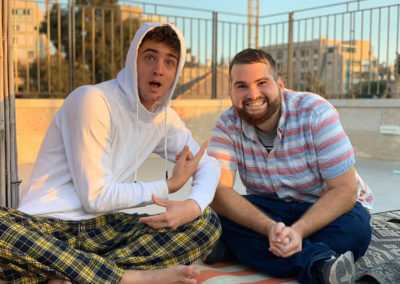 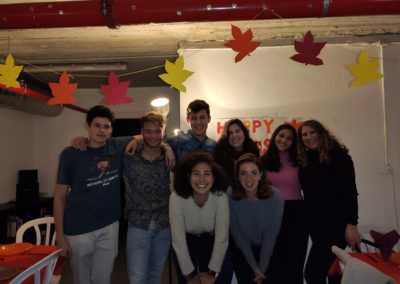 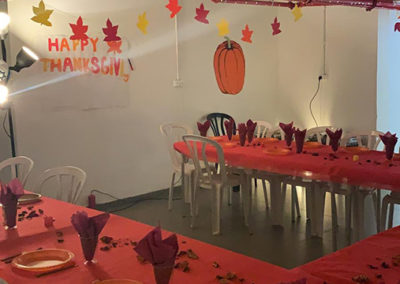 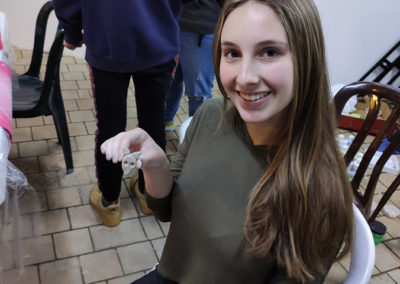 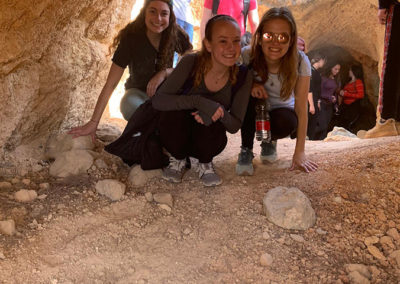 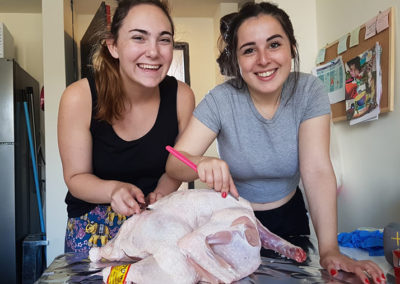 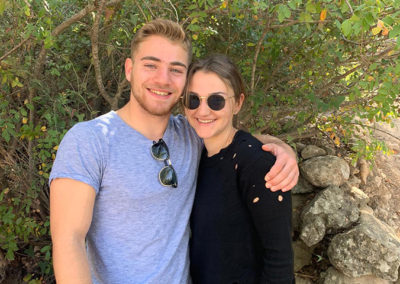 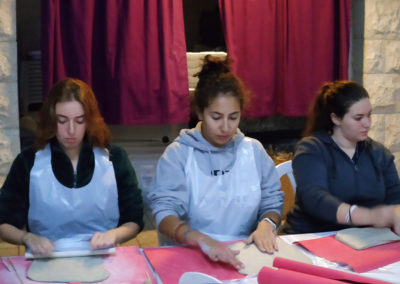 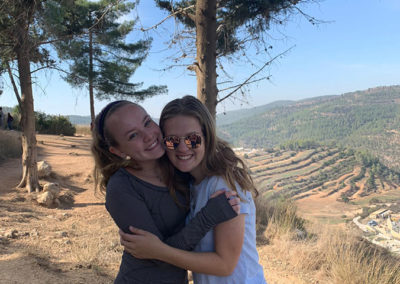 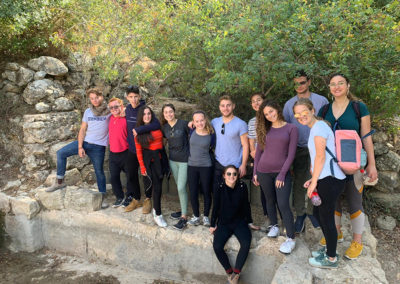 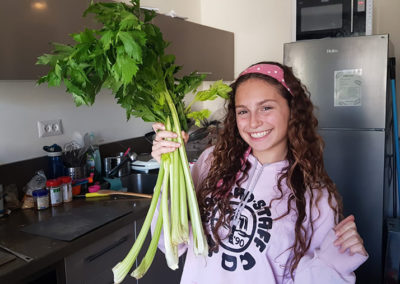