Happy Adar! The Jewish Sages say that from the moment Adar begins we increase in our measure of happiness. Here at Aardvark, we’re definitely lifting our spirits as we prepare for the crazy and joyous holiday of Purim.

On Sunday afternoon, some of our students went to volunteer at OneFamily Together. The students packed over 100 Mishloach Manot for families affected by terror attacks in Israel! OneFamily is a non-profit organization that deals with thousands of families affected by terror, battles and hostilities, civilians and soldiers and their families, wounded, disabled, trauma victims and bereaved families from all sectors and religions.

Lauren Meschoulam said, “Volunteering with OneFamily was beyond inspirational. I was amazed that despite suffering through the horrors of a terrorist attack, and the effects thereafter, both the organization and the affected individuals believed that even after such a tragedy, life could still be beautiful. It is this very mind-set that I will try to take away with me and apply to my own life following my short time with One Family.”

Adam Friedler said, “I’ve been to Israel in the past. Every few weeks for vacation purposes because my parents are Israeli, my grandparents witnessed the attacks during the Intifada. I never really talked to them about it because when they talked about it I was too young to understand. When I was older and wanted to ask, they were too old to tell. I’m glad I had the opportunity to hear what they went through. I was especially excited to hear the stories of the children in the association. I want to tell the bereaved families whose stories we heard, and actually all the families:  “You are so strong. I have no idea how difficult it is to be in your situation. You are an inspiration for me.”

On Sunday evening, we had Boys & Girls Night!

The boys met with Madrichim Rafi, Tomer, and Arad in the classrooms for an activity about Masculinity and Men in 2020.

They started out with a little friendly competition – the boys were split into 2 groups that each had to do a relay race to a whiteboard and write down the qualities of a “Real Man” and “Good Man” respectively. Once we discussed the difference between the two terms, the boys had some time to walk around the classrooms, where we had multiple projectors set up with videos and quotes on the walls all talking about the topic of Masculinity/Toxic Masculinity/Being “Man Enough”/Teaching our boys/Male Identity.

After about 20 minutes, the boys gathered back into the large classroom where there were 7 lines marked out on the floor, ranging from “Strongly Disagree” to “Somewhat Disagree”, all the way to “Strongly Agree”. As we read out different statements talking about masculinity and everything around the topic, the boys had to place themselves on the spectrum that was laid out in front of them. Some of the statements included “I feel comfortable showing my emotions”, “I feel the need to be a role model for others”, “Toxic masculinity is overblown”, and “I think the macho stereotype is hurting men”. After each statement was read and they moved around, they explained to the rest why they stood where they did one by one and had a very mature conversation about it.

The girls met with Madricha Tamar in the Moadon for an intimate activity about getting to know each other better and empowering one another as girls.

Nomi Beary said, “On Sunday, we had a bonding girls’ night. It was honestly so nice for us girls to be around each other without the boys and I feel like we all became a lot closer through this experience.  We got to talk to one another and enjoy each other’s presence along with being assigned to stare at each other’s eyes for four minutes. Yes, four minutes of full on starring. At first I felt very unsure about this task because A) I’m not close with this person and B) maintaining eye contact with someone can just be awkward and a little intimidating. As soon as the time came to stare at my partner I wasn’t sure that I could last, but that changed when she smiled at me and complimented my eyes. It made smile and I felt very chilled and less nervous. I really enjoyed sharing a small moment with that person because I already knew what good things I wanted to write about her and even though she and I aren’t close, I definitely felt comfortable around her. I think it’s a beautiful thing to share a small moment with someone else and to get away from everything around you and to focus on what’s in front of you. The bonding experience was a 10/10 and I would love to do it again with the girls.”

On Monday night, Madrich Arad held a juggling and acro-balance activity. Shalev Jackont said, “The Monday night activity I did with a counsellor and my friend was an unforgettable experience. We did juggling as well as acro-balance, both individually and communally. I strongly recommend it for anyone who chooses to do this. It’s a once in a lifetime experience and you may regret it if you don’t do it.”

On Tuesday, The Jerusalem and Tel Aviv students started the day bright and early by touring the holy city of Tzfat. Tzfat, one of Judaism’s four holy cities, is well known as the center of Kabbalah (Jewish mysticism) in Israel. The students started their tour on a rooftop in Tzfat and learned about the history of the old city. We continued to Tzfat’s citadel, which is the highest point of Israel’s highest city, some near 1,000 meters (3,000+ feet) above sea level, and a historically important site. Overseeing the Sea of Galilee, the mountains of the Upper Galilee including Mt. Meron, and portions of the Golan, the Citadel commands an amazing vantage point for military purposes. However, in peacetime it served an important use as well – the early Jewish kingdoms used the mountaintop as a place from which to signal other far-away villages and cities updates on the announcing of the new month.

Everyone continued on to the Ha’Ari Synagogue. It was originally founded by Spanish exiles who had settled in Greece and then immigrated to Tzfat, earning it the name “Gerigos”. Its congregation were Kabbalists, mostly followers of Rabbi Moshe Cordovero and they were joined in 1570 by Rabbi Isaac Luria (known by his acronym “Ari”). His custom was to pray in the synagogue on the Eve of Sabbath, proceeding from there with his disciples to a nearby field (Hakal Tapuchin) to welcome the Sabbath. It is said that it was during these sessions that the popular Shabbat melody Lecha Dodi was created. We visited another synagogue, the Abuhav Synagogue. The Abuhav synagogue was built, according to legend, in Spain. When the Spanish authorities wanted to convert it into a Church, Rabbi Abuhav, a 15th century mystic, transported it to Tzfat. The Abuhav synagogue still houses three old Torah scrolls, one of which was written by Rabbi Abuhav. These scrolls withstood two devastating earthquakes.

Afterward, we headed down into the Old City where the students had time to walk around on their own, visit shops, see art, and photograph. Many of the students stopped to eat some Yemenite delicacies such as Lachuchs, Malawach, and Jachnun.

Jonah Katsenelson said, “Holy. Dedicated to G-d or a religious purpose; sacred. Visiting the ancient city of Tzfat redefined my perception of the word holy. It possessed a complex wisdom, a beauty composed of Kabbalah, art, and spirituality. Whether it was touring the blue and white synagogue, learning about the Jewish history, or negotiating for “The Best Quality Silver Jewelry in the World”. Tzfat embodies an energy that is unparalleled to any other place on earth. A holy place is a place where time ceases to exist, a place where thoughts roam freely, a place like Tzfat.”

On Wednesday Evening, the students met Madrichim Tomer and Rafi in the Moadon for a Faces of Israel activity about the Israeli elections. We started with a game that simulates the elections on a very basic level – Rock, Paper, Scissors! Everyone walked around the room and challenged a random person to the game, the loser had to become part of their “party” and cheer them on as they go find a new challenger. In the end, we had 2 large groups facing off, with Adam Friedler winning the final showdown! After we sat back down and watched a short video explaining how the Israeli elections and Knesset work, the students were split into 5 groups representing 5 of the major parties in the upcoming elections. They each had to pick a representative to go up and have a debate with the other party leaders in front of everyone. One at a time, they each presented their party’s platform to the group (Devorah Branshaw being the standout with her creative approach), before transitioning into a Q&A session with the group. After a heated debate, Nadav Weil and Kachol Lavan won the election but failed to create a coalition with the other parties. This gave way to Devorah to have her chance at building a government, which she succeeded in doing by creating perhaps the most diverse government ever, and was elected as Prime Minister of Aardvark Jerusalem!

Internship in the Spotlight: Hi, My name is Josh Rosenheim and one of the most fruitful and enjoyable aspects of my Aardvark Israel experience is my internship at an Israeli architecture firm. It was important to me to try to find an internship in which I could utilize what abilities I already possess, and gain additional skills, and thereby be of material use to my employers (thus wasting neither their time nor mine). As an intern at Sitton Plus Tannous, I am being given just such an opportunity, helping out in meaningful ways, all the while building up my architectural skill set. Every day at my internship brings new challenges; but whether it’s sallying forth to take measurements of a site (thus far, the most frequent assignment), repairing an architectural model, or creating a 3-dimensional computer rendering, the task is invariably challenging (worth my while) and fun. Moreover, the firm is a delightful place to work, for everyone is exceptionally kind and welcoming. Best of all, they are not afraid to give me responsibility, though I am but an intern, which I think makes all the difference.

Next week, we will be having elections in Israel, a visit to the Israel Museum and the Herzl Museum and an evening with Masa! 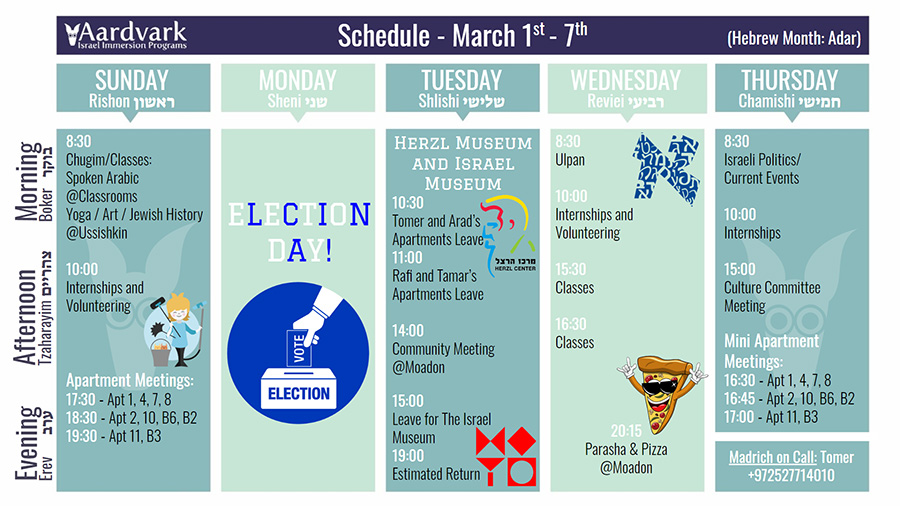 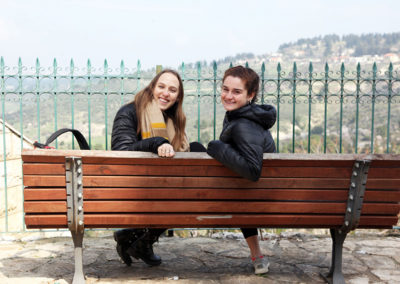 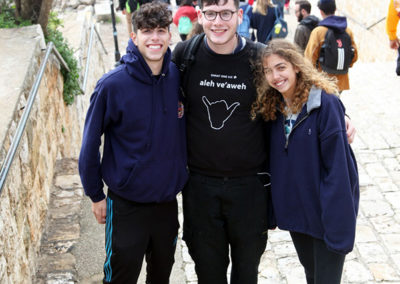 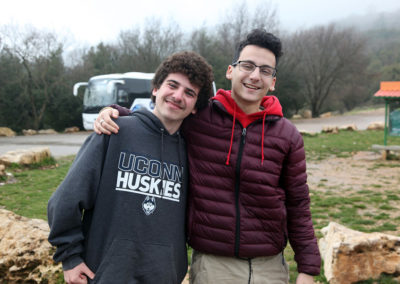 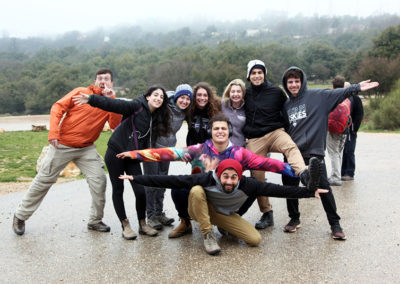 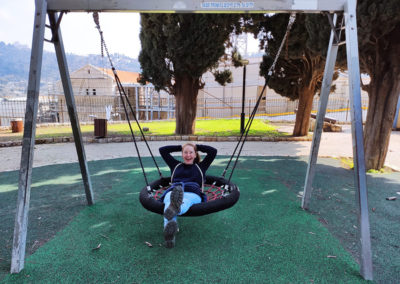 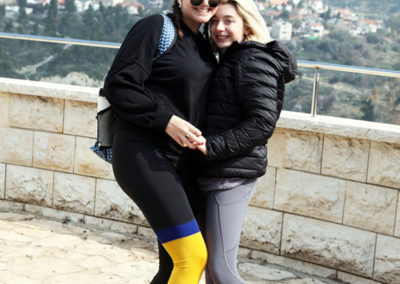 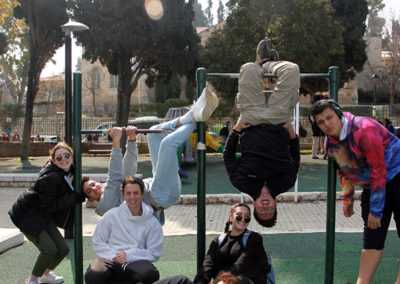 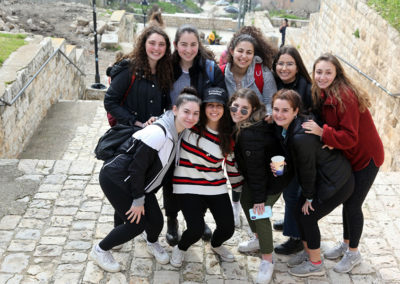 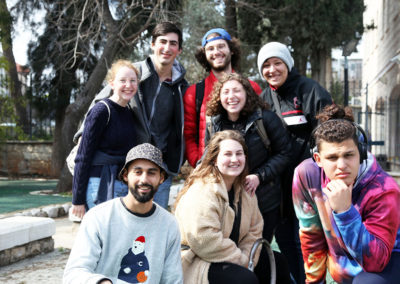 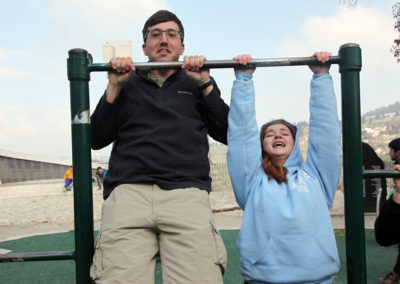