We have finished the first month of Second Semester and it was AMAZING!!!

We asked Josh Rosenheim to tell us his favorite thing about Jerusalem thus far and here is what he wrote, “It has been a month since I came to live in Jerusalem, and I can hardly believe it. Four short weeks and already, I am completely enthralled with this city. It has become my home, just as Aardvark has become my surrogate family. A fortnight had barely elapsed before I was at ease in my new surroundings, and now I feel not the slightest compunction in venturing out at night to get a bite to eat, or to seek out a Harkada (an Israeli dancing session). I find this easiness particularly remarkable because it is much more than I ever felt in the places that I have hitherto called home. It is not that I know every street and alleyway of Rechovia; for indeed, though I am at ease in, and to an extent familiar with Jerusalem, it never fails to surprise me. An example: each time I attempt to navigate the marvelous (if labyrinthian) Machane Yehuda Market, I get hopelessly disorientated; invariably, however, I find what I want, and discover several new shops along the way. In short, I have found that Jerusalem encourages exploration. Sometimes, though, that exploration is of a spiritual nature. Which leads me to state what has become my absolute favorite thing about my newfound life in Jerusalem: Shabbat. Bear with me. I know it has been said that there is nothing to do in Jerusalem on the weekend. But I have come to love everything about the weekend in Jerusalem: the way the entire city comes to a standstill on Erev Shabbat; the mad dash this necessarily produces on Friday, as everybody hurries to procure groceries; the siren which heralds the coming of Shabbat; and the quiet tranquility which holds the city for the duration of Shabbat. On this one day out of the week, the most prominent sound is the twittering of birds. Irrespective of one’s level of Jewish observance, Shabbat in Jerusalem is a unique and, I think, a glorious experience. And if like me you come from a place where to observe Shabbat is to be very much in the minority, this city-wide day of rest is especially moving.”

On Sunday evening, the Madrichim met with the students for their apartment meetings. The Madrichim ran an activity about being a “Mensch”; they watched an inspiring video and talked about the meaning of being a Mensch and people in their lives who they think are Mensches. One student even said that he thinks a Mensch is an honorable title and one really needs to earn it. A few of the other students mentioned you, their parents, as Mensches in their lives. The students then received a periodic table with positive mensch qualities and chose five characteristics that they have. The Madrichim handed out little mirrors that the students decorated with their Menschly qualities. The mirrors went up in the students’ bedrooms so that they can wake up every morning, look in the mirror and be inspired by and embrace their amazing characteristics.

We will hold a ceremony where students who have helped the community, their friends, and use their character to influence their surroundings positively, will receive a Limited Edition Aardvark Mensch shirt. We are looking forward to handing out the honorable and prestigious Mensch shirts in the near future!

On Monday evening, we went rock climbing at a local rock climbing gym. All the students learned how to belay and had a really good time.

“Dear Mom and Dad, I had the best time and I’d like to do this every week. I even made it to the top! It was a fun way to exercise, especially since you know I don’t like to exercise. Before Aardvark, I felt like I was stuck between a rock and a hard place. And now I’m just climbing upwards and I don’t want this year to end!” Love, Ron ‘the rock’ Segal.

Tuesday was a big day for our students. They went on a special tour of the Old City that was designed to highlight various sites significant to Judaism, Islam and Christianity. First, we toured the Temple Mount and had the opportunity to see the Dome of the Rock from up close. It was crazy thinking that 3000 years ago people were cutting massive stones out of the earth and then hauling them up for the construction of the temple. For most of us, it was incredibly surreal to be at the holiest place in Judaism and we enjoyed learning about the history of the Temple Mount itself. All of the students were in awe of the beautiful mosque. We are incredibly lucky that we are in a time of peace and that we are able to go up the Temple Mount and to visit this site which is so important to both the Jewish and Muslim people.

Next, we walked through the Christian Quarter of the Old City and arrived at the Church of the Holy Sepulchre. This church is where Jesus is said to have been crucified, as well as buried and then resurrected. Inside, the church was packed with thousands of visitors. We explored the different halls and enjoyed seeing and learning about the decorations and displays within the church. We were in awe of the architecture and the mosaics inside. Many students who studied art history in high school were able to tell us many interesting things about the art and history of the church.

Our last stop was the Churva Synagogue. The synagogue’s story began in the 16th century when a group of Ashkenazi Jews was fighting the Muslims over the land purchase ban in Jerusalem. The property was eventually acquired, and it became known as “The Ashkenazi Courtyard”. Despite hardship and difficulties, this Jewish group was fully committed to Jerusalem and to the idea of establishing a Jewish community in the city. The Hurva Synagogue was constructed and destroyed time and time again until it was finally completed in 1864. During the War of Independence in 1948, the Jordanian soldiers bombed the synagogue. Its reconstruction began after the Six-Day War, when the Jews came back to live in the Jewish Quarter. However, it did not officially reopen until 2010.

Essence Slomianski said, “Having been to Israel many times in the past, I never realized how much I haven’t seen. Especially when it came to the Old City. Going to the Temple Mount was a really eye opening experience because I got to see in person what I’ve heard and learned about for so many years of my life. Just being on the Temple Mount and seeing the dome of the rock, it’s architecture and colors was an unbelievable experience. I never thought I’d have the opportunity to be somewhere so holy and I feel so lucky that Aardvark gave me the opportunity to be there and learn about it.”

On Tuesday evening, we heard a fascinating lecture from Yiscah Smith, a transgender woman who previously lived an ultra-orthodox lifestyle and fathered six children while living in the Old City of Jerusalem.  Now 65 years old, she is a teacher of Jewish spirituality and lives as any religious woman in Jerusalem. Yiscah shared with us that her desire to be “honest with God” compelled her to give up her old life as a man, but her struggle to accept herself took five decades. In addition to sharing her story with us and answering questions, she also read to us key selections from her book “Forty Years in the Wilderness: My Journey to Authentic Living.”  It was fascinating to hear the sensitive and thoughtful questions asked by our students at the end of the lecture.

If you would like to hear from Yiscah yourselves, check out her TEDx talk online by clicking here.

Baily Friedman reflected, “Yiscah told a truly moving story about finding yourself, staying true to yourself, and explaining that it doesn’t happen overnight and it isn’t easy.”

On Thursday, we met in the morning for class followed by internships and volunteering routine. In the afternoon, the students met with their Madrichim for a short apartment meeting to conclude the week and go through the next week’s schedule.

Next week, we will see the start of Jerusalem’s annual Winter Festival. The festival takes place every Monday in Jerusalem during the month of February. We will also be going to Gush Etzion, hearing from Women of the Wall, and some of our students will be traveling to Ethiopia! 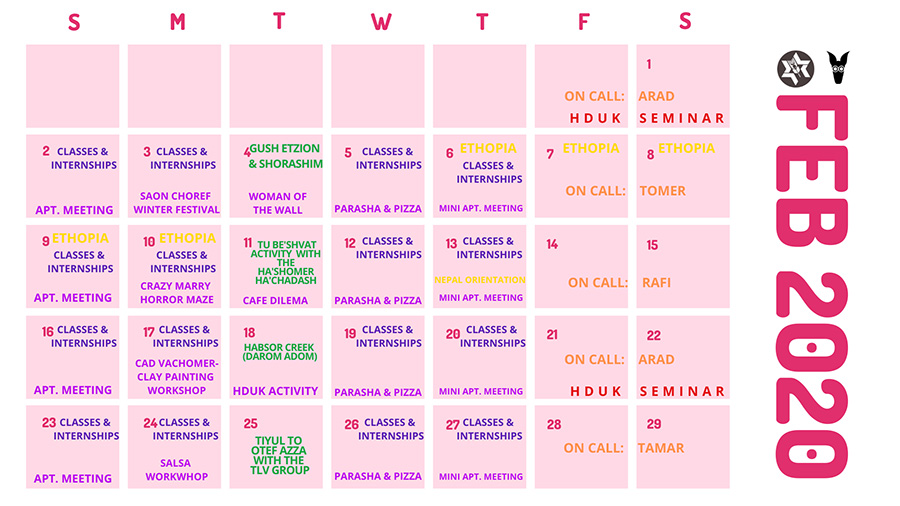 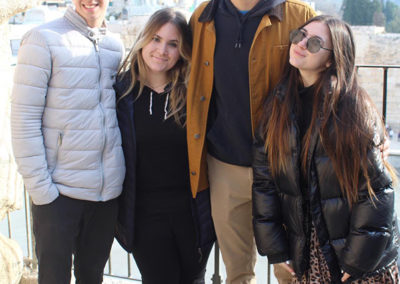 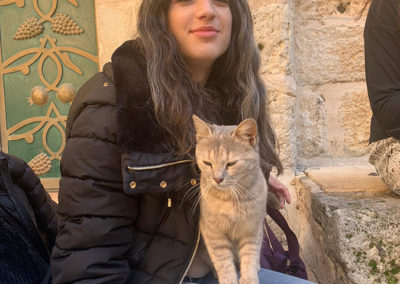 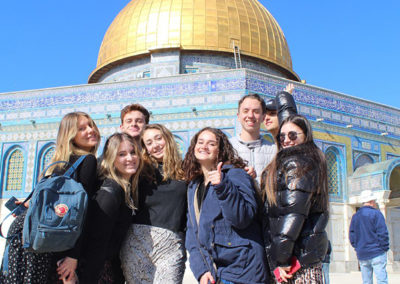 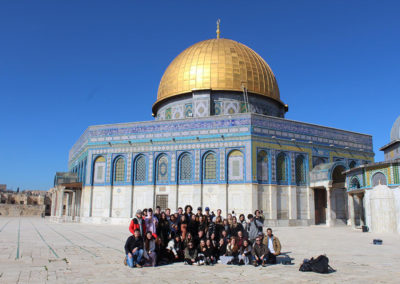 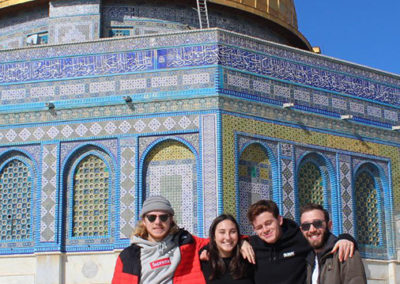 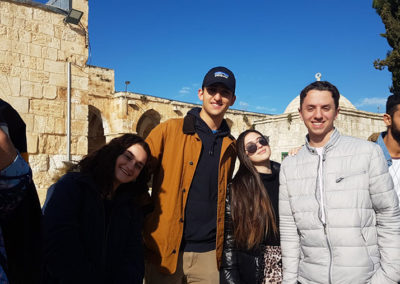 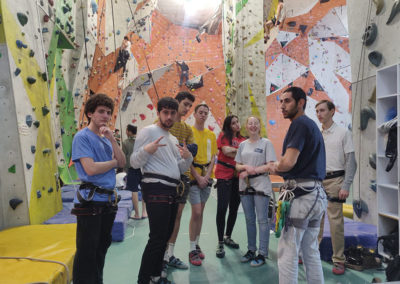 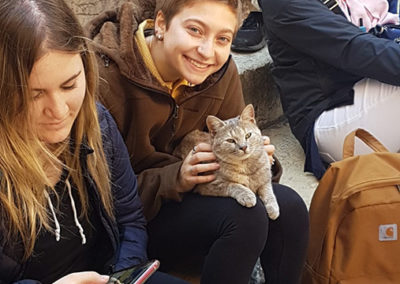 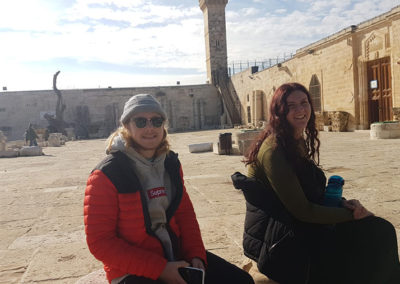 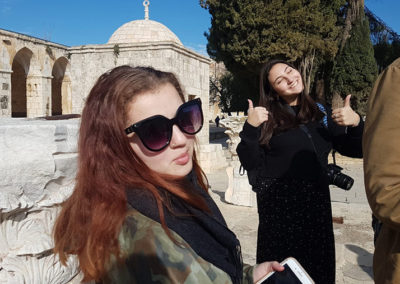 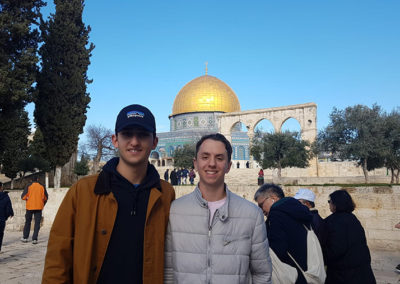 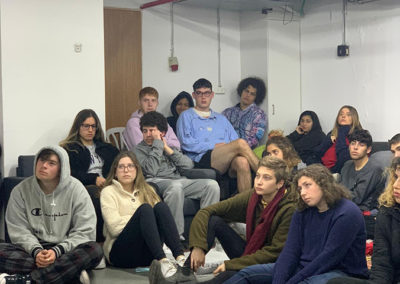