What a week! With Simchat Torah, a three-day seminar in the desert, activities, and workshops, it has been very busy and exciting.

Ready to hear all about it? Here we go!

On Sunday evening, Simchat Torah began. Simchat Torah is the holiday that celebrates and marks the conclusion of the annual cycle of public Torah readings, and the beginning of a new cycle.

Yael Seaman said, “Simchat Torah in Israel is something everyone should get a chance to experience.  I’d experienced Simchat Torah back home, but always became overwhelmed at the amount of noise and people dancing, but today I joined in the celebration, dancing, laughing and celebrating the Torah with those around me. My friend Leah Matthys invited me to go to Shul with her in the Old City because she wanted to go to a Shul where women can hold and dance with the Torah. For the fourth Hakafah, the women were handed the Torah, and this sweet older lady held it in the middle of our circle. You could tell how much this one small act meant to her because as she held the Torah, she cried as she prayed for everyone she knew. Walking through the Old City, you could feel the happiness radiating off of people whether they were dancing in the street or simply passing by. Today will become a memory I will always remember.”

The highlight of the week was our 3-day Ketura Seminar!

On Tuesday morning, bright and early at 6:00 am, we departed to Kibbutz Ketura, which is in the south of Israel in the Arava desert, 30 minutes from Eilat (the southernmost city in Israel). Click here to see exactly where the kibbutz is located. It took us nearly 4 hours to get there and from an Israeli perspective, that is a lot!!

We began with a walking tour around the Kibbutz followed by a delicious lunch in the Kibbutz dining room. Then we gathered (both the Tel Aviv and Jerusalem Aardvark groups) for a glimpse of what life is really like as a member of a communal kibbutz. The students were split into small groups, and each group was given a scenario they needed to discuss and come up with a solution for. Committees such as Education, Finance, Culture, Food, and Ritual govern communal life on the kibbutz. The scenarios the students were given were based on actual situations that happened at Ketura and neighboring kibbutzim. The discussions were interesting to hear and several of the groups came to the same conclusions as the kibbutzim did.

Sarah Ellis said, “The tour of the Kibbutz was really nice. It was interesting to see and walk around the Kibbutz and learn how it has changed through the years. It’s amazing to see such an interesting and unique lifestyle alive today in the Kibubtzim.”

Shea Doty said, “Learning about all the ways that this small Kibbutz in the desert was progressing, renewable energy research and bringing in students from all background to learn together, that was the highlight that I was not expecting of a Kibbutz.”

After sunset, the Kibbutz staff arranged a BBQ for all of us next to the pool. We had good meat (and good options for vegetarians), great music, and amazing people to hang out with.

The day concluded with a bonfire and Kumzitz! S’mores, guitar, bonding, stargazing and so much more!

Yael Hallak said, “I have just spent a first amazing day in Kibbutz Ketura with my Aardvark family where I had my first s’mores experience. I am originally from Italy so it was very nice to experience something that is different from my culture because I really love to discover new traditions and I can’t wait to learn new ones throughout this year and maybe even teach some of mine to my new friends!”

On Wednesday morning, we started our day bright and early (at 6 o’clock again!) for different Kibbutz activities.

There was a choice of desert art options including a hike up the mountains neighboring the kibbutz, and enjoying a nice view of the kibbutz from above, mud building, decoupage, candle making, oil painting, or a tour/volunteering in the experimental orchards.

Eli Klausner said, “At candle making in Kibbutz Ketura, we learned the different techniques to create candles. We made our candles by collecting sand in a container and making it wet. We then molded what we wanted our candles to look like, and chose colors to put in. While waiting for our candles to harden, we ate breakfast and got a chance to hang back to talk to the candle maker about everyday Kibbutz life.”

After everyone returned from their activities, we split into groups for 4 different sessions: Renewable Energy in the Arava Desert, Entrepreneurship in Kibbutz Economy, Peace-building, and a tour of an Off the Grid Village.

Chana Sternberg said, “At the Peace-building session, a woman from the Kibbutz shared with us her experience in fields of sociology and peace-building, from working on the infamous OJ case to surveying people on prejudice and working with issues of illegal immigration in Israel. During the peace-building activity, we discussed personal conflicts in our lives with a partner, taking turns talking. The goal of the activity was not only to learn how to have meaningful dialogue with those who hold differing values and ideologies but also to respectfully explain one another’s narratives in an attempt to come to common grounds on a variety of issues. As a Peace and Justice Studies major I think it’s crucial for people from varying backgrounds and ideological spectrums to engage in active listening in order to find common ground and universality on important issues as a basis for collaborative solution seeking, whether those issues be local or international.”

On Wednesday afternoon, after having time to relax together, we headed out to the Kasui Sand Dunes. The students went crazy when they saw the opportunity waiting for them in the sand! They were jumping, digging, wrestling, rolling, and running in the soft sand. Some of the group did back flips and surfing – it was such fun to watch.

After everyone had run out of energy, some of the students had time to pick a spot to be alone and reflect on our experience in the desert. Each student was given pencil and paper, and some text to read with a few questions to answer about their experience. At the end of twenty minutes of complete silence in the sandy wilderness, the Madrichim gathered their students to share some of their writings and reflections.

As we were leaving the sand dunes, it began raining!

Max Rudick said, “It never rains in the desert and we got to see it! Boom!”

Back at the Kibbutz, we were treated to a fun Middle Eastern dinner.

This was followed by a memorial ceremony for Aardvark’s founder and former director, Keith Berman z’’l. Keith passed away suddenly and tragically five years ago immediately after the Ketura seminar. Keith loved Israeli dancing and so we had an evening of Rikudei Am (Israeli folk dancing) as a fitting tribute to Keith’s memory and legacy. We danced and danced until it was so late that we had to shut down the music so people could sleep!

On Thursday morning, we were given the choice of Yoga or a bike ride. The bike ride was around the kibbutz and through the date orchards. One of the highlights was being able to stop along the Jordanian Border. The yoga group was able to meditate in the fields of the Kibbutz and really connect with their feelings and emotions and enjoy the peacefulness of the early morning.

We finished the seminar with a fun game called ‘Schnitzelborscht’ that focused on knowledge of Israel. The competition was intense but everyone had a great time whether they won or lost.

Zak Kornfeld said, “We had to go from station to station and we learned a lot more about Israel, which is so important because Israel is my home this year (and maybe in the future). It got very competitive. It was also very fun to see how much we already knew as individuals and as a group.”

To end our three days together, we held a ‘Mensch Ceremony.’ About a month ago, we held a session with the students where we discussed what it truly means to be a mensch, how it can help influence the community, society, and all the people around us. A mensch is not only a person who has a good character, but also a person who uses their character to influence their surroundings positively.

Each city (Jerusalem and Tel Aviv) chose four students, who over the last month have shown these qualities and have contributed to the community as a whole. From Jerusalem, we had Leah Matthys, David Muchnick, Ayala Tzadikario and Amit Harir! These four students have arranged different activities and brought good vibes and energy to the program. We couldn’t be more proud of our students!!

Next week, we are back to the regular schedule of volunteering, internships and classes. We will also be visiting St. George’s Monastery and having a BBQ at the Director’s house, as well as attending a Netta Barzilai concert with Masa!

In addition, student Amit Harir will be starting the Marva Military Program next week and we wish him Behaztlacha (Good Luck!). We are excited to cheer him on and support him throughout this two-month experience! 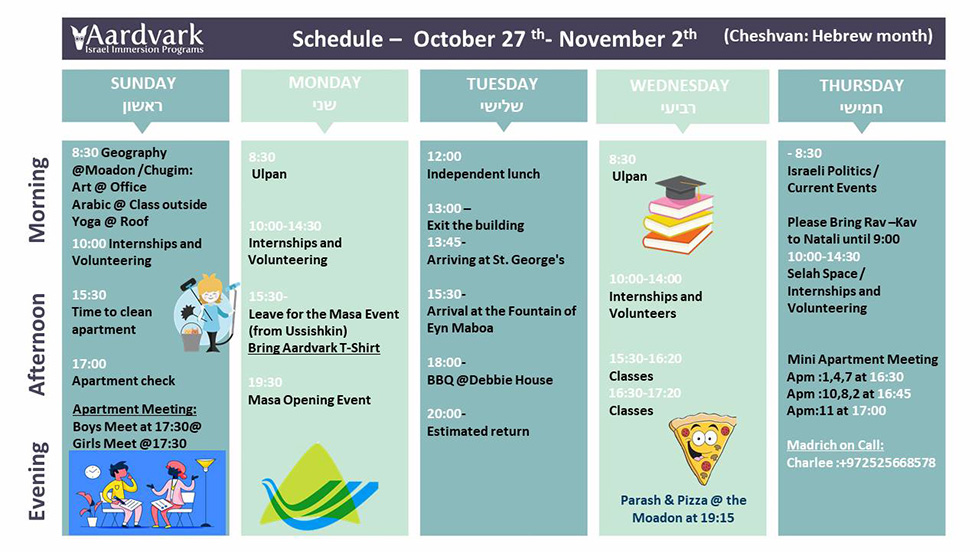 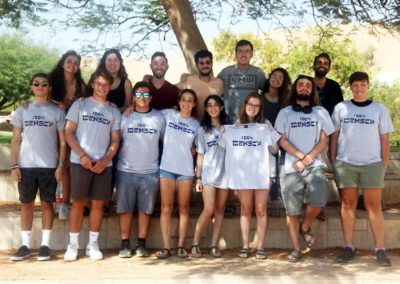 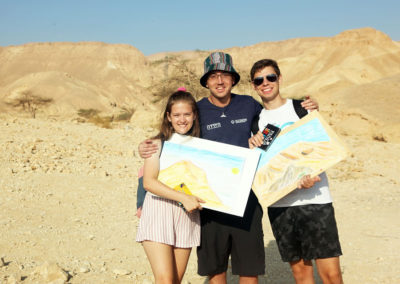 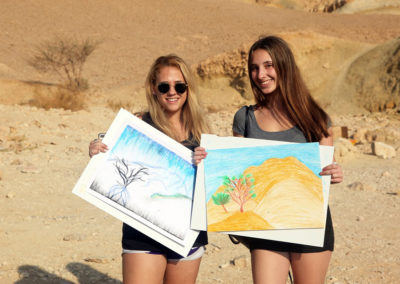 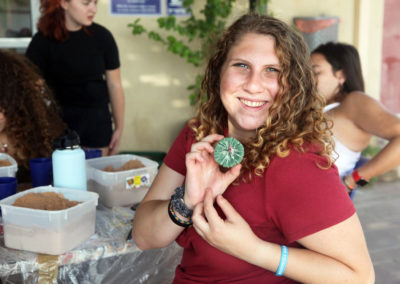 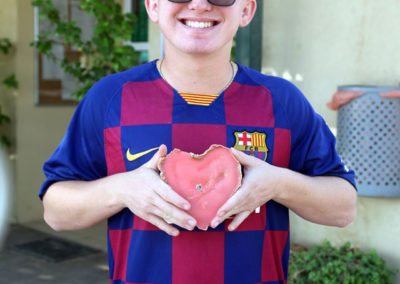 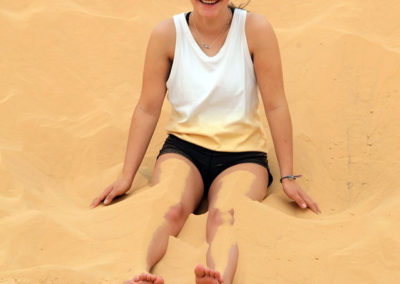 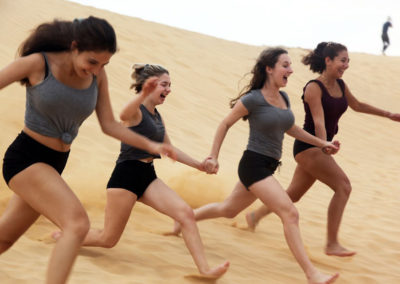 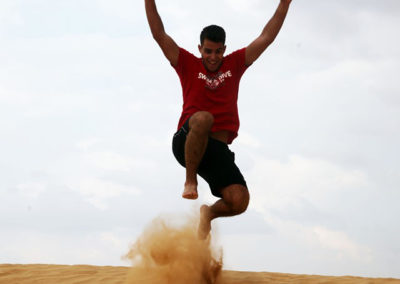 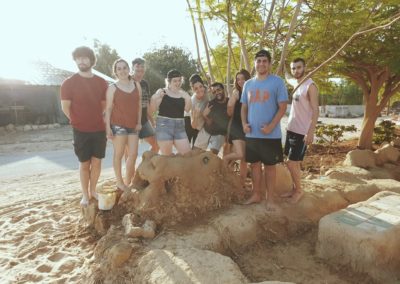 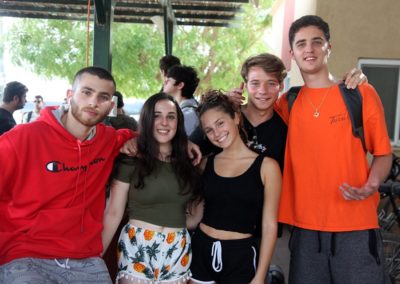 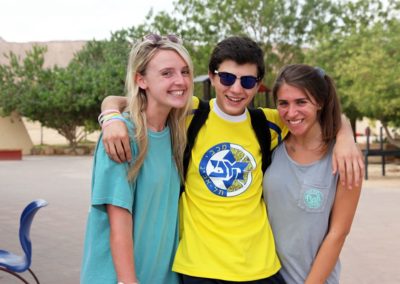 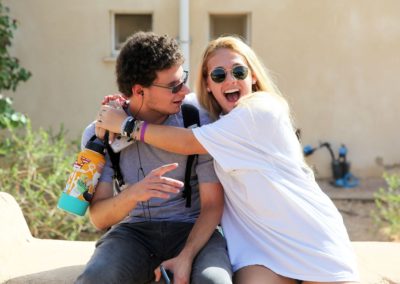 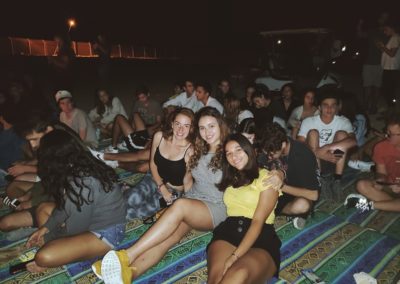 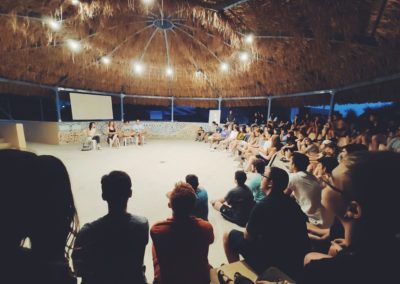 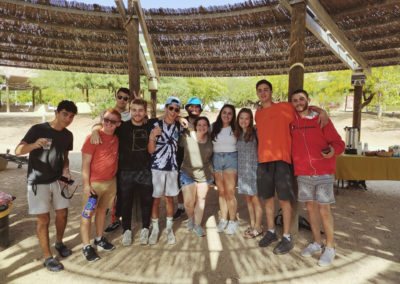 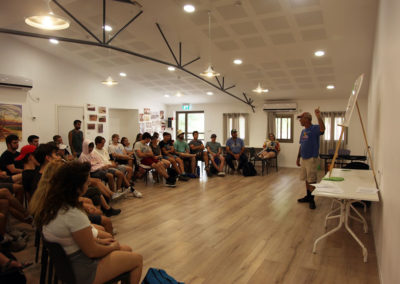