This week was very emotional as we moved between the great sadness of loss and memorial to extreme joy and national pride.

On Sunday, we began the week with apartment meetings in which each Madrich prepared his groups of students for the last month of plans and activities of this semester.

On Monday evening after volunteering and classes, we had a very special activity called “Aardvark Mind & Body”, which was organized by our Madrichim. At the entrance to our Moadon, we had  very soothing and relaxing music playing together with scented candles and liquids. From the very beginning, we could tell that the students came very open-minded to learn and understand a new and different world of spirituality.

The activity started with a short verbal explanation and a group meditation, after this, they divided into 2 groups that had different workshops on different subjects. One group had a scent and oil workshop, in which they created a natural spray used to assist in healthier sleeping. The other group had a senses workshop that focused on opening up our senses and using them more in our day-to-day lives. In the end, all the students made natural tea using herbs that were harvested from the local community garden, while drinking their natural tea our Madrichim summed up this special and unique activity.

On Tuesday morning, we had an activity about the various aspects of Israel’s Memorial Day to prepare the students. The group was divided into four groups and had four short activities in each room. The first room was with Ilay where he shared a personal story about a friend from his military unit called Roi Peles z”l, who fell in combat in the Tzuk Eitan Operation. The second room was an interactive activity where the students were asked to address different questions and conflicts, and express their opinions about the IDF, Memorial Day and Independence Day. Another room was about the values of the IDF and how those values come to reality in military service. The last room was about the connection between culture and the memory of the people we lost. In that room, we learned three songs written by fallen soldiers, friends and family members. After reading the lyrics and playing the songs with the guitar, the students learned the stories behind the songs and discussed the effects of the songs on Israel’s memorial culture.

On Tuesday evening, we all traveled to Latrun in order to participate in the official MASA Memorial Day ceremony. When we arrived, before the ceremony began, we walked through an exhibition of military gear and equipment, afterwards we had dinner and then we rushed to our seats at this great big amphitheater. We were honored to attend this ceremony alongside 4000 MASA participants, bereaved families, and Israel’s leading politicians. The ceremony was very special and we heard different stories of fallen soldiers and victims of terror. Using songs, videos and speeches, the stories all came together in a very meaningful and powerful way.

“In an age where terror targets our homes and synagogues, and when we face new and old forms of anti-Semitism on the streets and on campuses, the home front has become the front line, and we stand on that line together,” Israel’s Minister of Public Security and Strategic Affairs Gilad Erdan said in a statement to the Journal. “We are always and forever committed to the core Jewish principle, ‘Kol Yisrael aravim ze la ze’ (we are all responsible for one another). And we have a special responsibility to our missing and captive soldiers.”

He continued: “We will never rest until we bring Hadar Goldin, Oron Shaul, and all of our missing and captive soldiers and civilians home. I believe this is our highest moral duty and a sacred oath we take to our soldiers and their families. To our enemies I say, the long arm of the IDF and security forces will reach you anywhere and everywhere, on our borders and far beyond them. We are watching you and we will act forcefully to defend ourselves against any threat.”

Isaac (Bougie) Herzog, Chairman of the Jewish Agency and Masa’s honorable guest talked about the anti-Semitic events taking place all around the world including the recent attacks in Pittsburgh, Poway and Israel, and Paris.

“We can never put the fragments back together,” Herzog said, “but we can renew our resolve to cherish their memory and honor their legacy.”

At the end of the ceremony, as we all stood for HaTikva (Israel’s national anthem), we all felt extremely proud and grateful to be here in Israel amongst all these other MASA participants.

On Wednesday morning, we went to the Kiryat Shaul Cemetery in north Tel-Aviv. On Memorial Day in Israel, it is very common for Israelis to visit the different cemeteries all over the country in order to pay their respects to the fallen soldiers and victims and their families. In the cemetery, we walked around in small groups, placing flowers on the graves and lighting yahrzeit candles. Some of us even had the chance to hear different stories from the bereaved families and friends about their lost loved ones. After walking around, the official ceremony began. The keynote speaker at the ceremony was Yoav Galant, a minister in the Israeli government. After the speeches and the ceremony ended, we left the cemetery and sat in a nearby field where we heard a young American girl, who is now a soldier in the Israeli army, talk about her own personal story and her decision to make Aliya and come to Israel.

After the talk, each apartment received Israeli flags to hang outside their balconies and we all returned home to prepare for an evening of celebrations.

That evening, we offered our students the chance to participate in a special prayer for Independence Day, a large number of students chose to come and meet our staff in the synagogue to participate. They all left the prayer full of excitement and pride.

This week we are traveling to the north of Israel for 2 days. On the trip, we plan to visit Tzfat, Kibbutz Kineret and even go kayaking in the Jordan River. 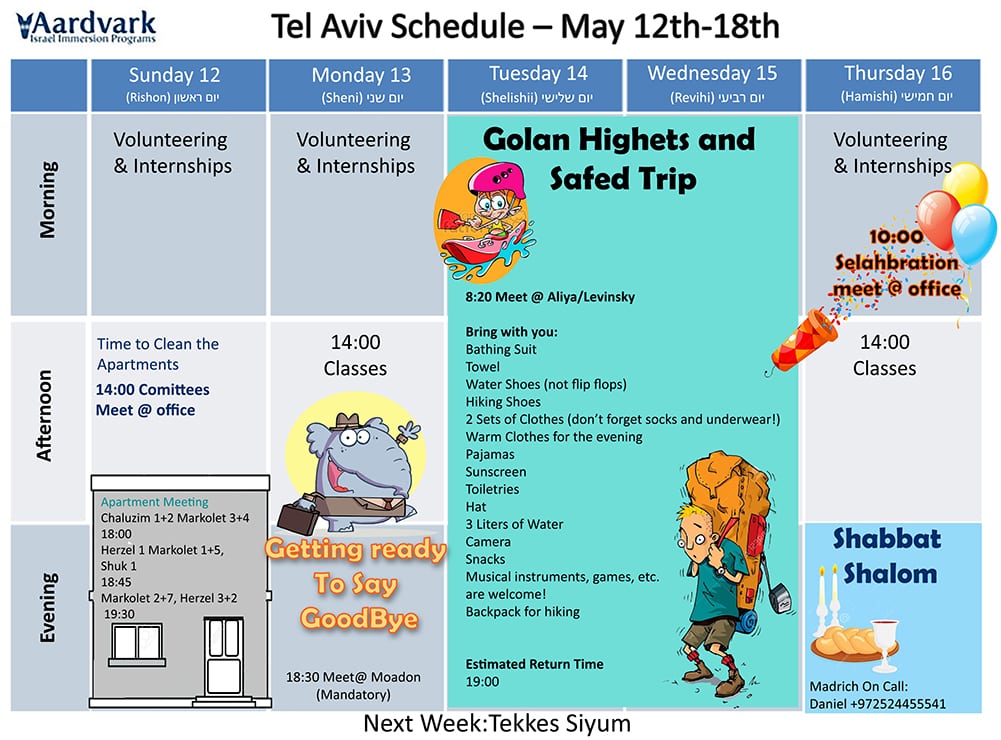 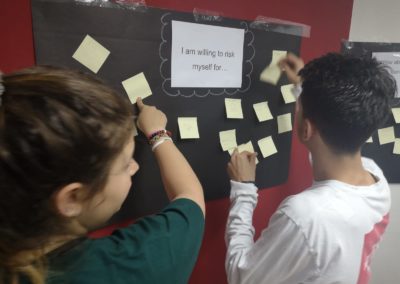 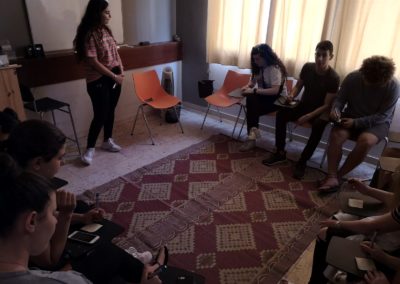 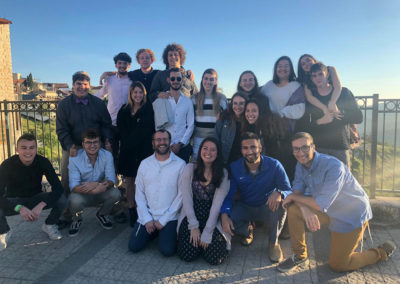 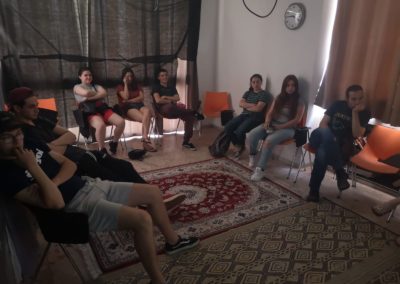 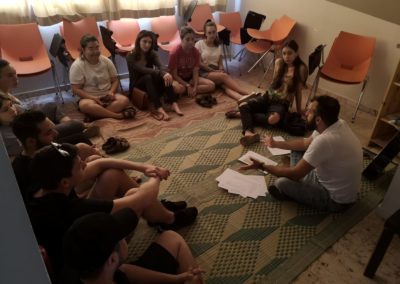 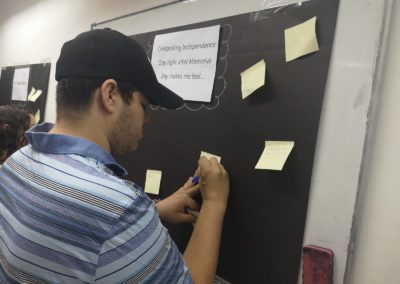 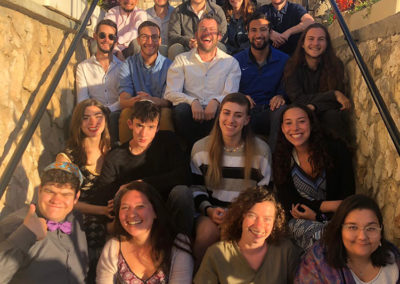 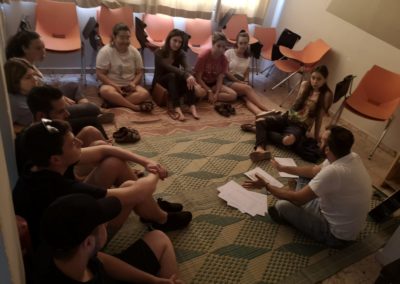 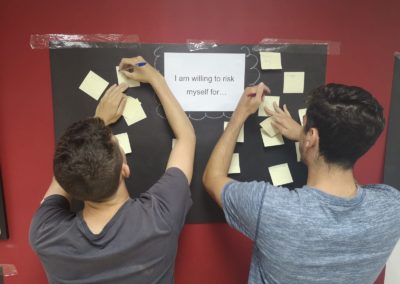 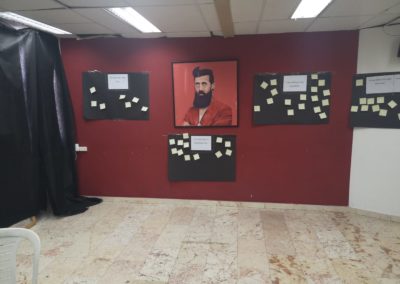 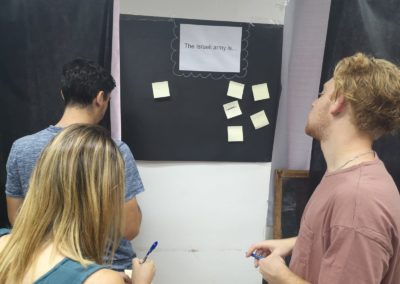