The rain of last week has been replaced with bright and sunny weather! As it began to warm up the bravest souls among us started to take off some layers.
It is a beautiful time to be outside so we are encouraging the students to go out and explore more of the city.

nutritionistDuring the week the students met a nutritionist. We try to schedule this session at the beginning of the semester so the students have more knowledge of how to cook healthy food and shop cheaply! The best tip (in my opinion) is to buy food made with the least amount of ingredients possible. Ideally less than 5. Another good thing to know is that ingredients on food packets are listed in order of quantity. It means that if the first ingredient on the list is sugar then most of the product is made of sugar.
The nutritionist also gave some recipes for tasty snacks! (and of course some samples..)

Our Tuesday tour was to Dialogue in the Dark, a unique museum which allows people to experience what it is like to be visually impaired by simulating complete blindness. The group started the exhibit with a trained guide who is visually impaired. Since we were in the dark the students were only able to see the guide at the very end of the tour. During the tour the group experienced simulations of going on a boat, picking fruits at the marketplace, crossing the road and many other everyday activities in complete darkness. Being led through the different simulations by someone that can’t see teaches us a lot about perceiving challenges and overcoming difficulties.
Unfortunately there is no way of taking pictures of this tour so you’ll have to imagine the experience.

Sushi and Parsha Parsha and Pizza this week became Sushi and Parsha as the group learned about the Torah portion of Mishpatim. After receiving the Ten Commandments last week, this week the Jewish people are given over 50 separate commands covering a huge range of areas. There are laws about slavery and witchcraft, parents and Pesach, robbery and compensation and many more. We spent some time discussing bribery and the potential damage it can cause society. One of the laws in the portion sets out the importance of keeping the justice system fair and this allowed us to reflect on Israel’s current struggle with corruption

This week the Culture Committee – A.K.A C.R.E.W – arranged our activity for Wednesday. The students put in a lot of effort and energy to make everything work! They put flyers all over the office and the apartments, created an online form so everyone could sign up in advance, bought decorations and refreshments for the event and more..

Sarah Weisfogel came to ask me to use the weekly letter as a platform for a project her, Alena Cisneros and Daniel Samuel are involved in as part of their volunteering – How can I say no to that?!?!
So Sarah, The Stage is yours!

“Not long ago, we started volunteering at Save a Child’s Heart (SACH), an international non-profit organization which provides life-saving cardiac care to children from developing countries and offers comprehensive training to medical professionals from these countries. They have offices all around the world, but as of now can only service children in Israel. My job as a volunteer is to help create a loving and comfortable environment at the SACH house for the kids during their stay, before and after surgeries. Most of the children don’t speak English or Hebrew and come from culturally diverse backgrounds. You may assume that this mix could never work, but somehow SACH has succeeded in saving thousands of children’s lives while making their experience unforgettably heartwarming for all parties involved. We can wholeheartedly say that SACH is one of the best organizations we have had the opportunity to be a part of. To continue their great work SACH relies on the generous donations it receives, and they have just set a new campaign and goal to save eight more children’s lives. This Valentine’s Day we want to encourage you to find it in your heart to give to a child’s heart. Any donation helps and all it takes is a few minutes. Help us reach our goal so that SACH can help keep eight more beautiful, smiling children alive. “ http://www.give2gether.com/projects/give-your-heart-out-2016.hoau69065/

Those on the Mind & Body program met with Maxine. This time they learned the secrets of acupuncture. It is a technic which originated in ancient China. By sticking a small needle in the correct place you can change a lot of things in the human body – feelings, strength, some abilities etc.The students tried some needling on an apple and some allowed Maxine to perform acupuncture on them.

On Selah Track by Rabbi Marc Kaye:
“Sunday’s Lunch and Learn welcomed guest speaker Dr Miriam Feldmann from the Three Faiths Forum. She gave an overview of her interfaith work with religious Jews, Christians and Muslims in Israel and Selah had a chance to do a comparative study of Torah, Koran and New Testament texts on the theme of healing.

On Tuesday night Selah walked to the local Israeli Jewish culture center HaMakom near the Carmel market and had a Chevruta study session around the subject of authority.

On Thursday morning, we had a visit from Rabbi Ron Yosef, Israel’s first openly gay Orthodox rabbi from Netanya who founded a support group and educational institution for religious gay and lesbians called HOD. He spoke about his decision to come out, his opposition to Gay Pride (!) and explained to the group some of the classical Torah and Talmudic texts about the subject. The group was able to ask questions and develop sensitivity to the challenges religious gays and lesbians face in their communities…”

In social psychology, Dr. Smith is teaching the students how to define the concept of evil in terms of psychology. They learnt that “evil” is defined as the exercise of power to intentionally harm (psychologically), hurt (physically), destroy (mortally) and commit crimes against humanity. This definition was developed by Dr. Phillip Zimbardo who had conducted the Stanford Prisoner experiment in 1971. Through understanding the definition of “evil” they are beginning to understand that instead of trying to figure out “who” is evil they need to reframe the question to “what is responsible [for evil?]” The students learnt that it could be the “who of the people” and/or the situational forces in the behavioral context (Dr. Zimbardo TED Talks 2016). Within the behavioral context there are three principles: dispositional, situational and systemic. The whole premise of Dr. Zimbardo’s theory is that “power” is the dependent variable that drives the “system of who of the people, and/or the situational forces”. The purpose of learning about evil is to put it into perspective of how ordinary people could and do commit crimes against humanity.

Before I leave you with a Shabbat Shalom –
You should know that at the beginning of each month I hold a “Coordinator Talk” with the students. In this talk we summarize the month that has just ended and go over what is planned for the next. The goal is to give the students an idea of how the schedule is planned. In every talk I reiterate some big concepts. For example: Mediocrity – “Don’t settle with a medium experience here, don’t be a mediocre! – The opportunities that they can take advantage of are enormous!! When you talk to your child see if they are fulfilling their potential in their internship. Ask if they have joined one of the teams or committees. Ask if they are exploring the endless opportunities of Tel Aviv – If not someone is not doing their job – either it is your child or us, the staff.
Give your child’s Madrich an update if he is missing something (or me). 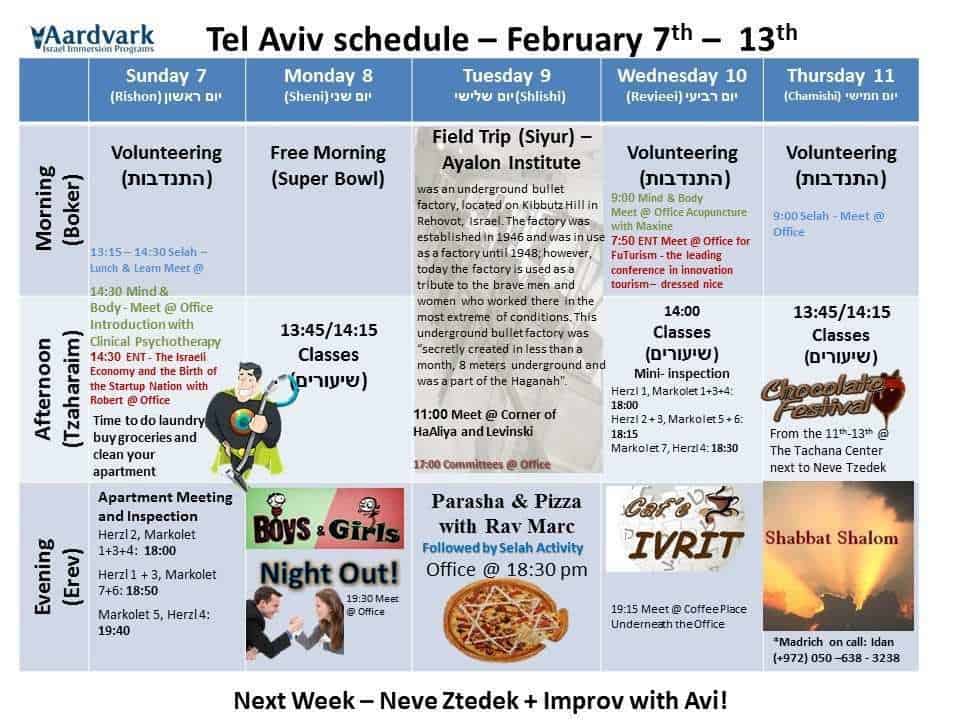