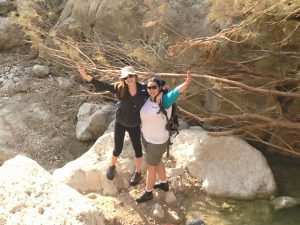 The students have just finished their first week with Aardvark Jerusalem! According to the students every day felt like a whole week due to our busy schedule and now they are looking forward to a relaxing and meaningful Shabbat together.

We started this week on Monday. Some of the students came to us from Tel Aviv while some arrived from the airport. Thanks to our trips last semester I already knew some of the students but now I am really getting to know them individually.

I have to admit that while the students unpacked on Monday I realized that some of them were not happy with the room placements. However, instead of becoming angry they decided to behave maturely and organized a meeting in which they put forward suggestions about how to improve the situation and ensure that everyone is happy. It was a day full of excitement, some nerves, many introductions and a fresh start for everyone!

During the first night I spoke to the group and welcomed them to Jerusalem and to the Aardvark program. After the students had eaten dinner I then introduced them to the program in Jerusalem.

I emphasized the importance of the word community and the fact that while we may be a small group we are still interconnected.
It’s important to me that throughout the semester the students will be in contact with Israeli families from our community in Jerusalem and this will start on Shabbat when they will all eat lunch with hot families..

On Tuesday the students met in their apartments to decide upon their budgets for grocery shopping. They had to make decisions regarding what they will buy as a group and what will be individual purchases.

On Wednesday and Thursday the Jerusalem students joined the Tel Aviv group for the first overnight trip of the semester and we had a hugely enjoyable two days in the Judean desert.

The first hike was called “Metzukei Dragot” (Darajah Cliff) during which we were able to enjoy an outstanding view of the desert before finishing the hike by rappelling down a cliff! After that we went to Kibbutz Kalia.

In the evening the staff began the traditional contest between the Jerusalem and Tel Aviv groups – “Minute To Win It”. In each round a short video was shown presenting a task that needed to be completed within a one-minute time slot

The students fully entered into the spirit of the competition, I’ve never seen anything like it during my time with Aardvark! There were all sorts of cheers and shouts. The staff prepared a total of 8 missions but the TLV group won 4 and the Jerusalem group won 4 so at the end of the contest we had a draw! Of course we couldn’t let it finish like that so Hagai, one of the counselors from Jerusalem, came up with a cool idea for a tie breaker which, unfortunately for some, the Jerusalem group won!!

The second day of the Tiyul was fantastic – the students were able to choose the hike that they wanted to do. Hike one was “Masada” and hike two was “Nahal Arugot” (Arugot Stream). Both of them presented a number of challenges and amazing views.

I hope you have all enjoyed listening to stories from your children – I’m sure that they have a lot to share with you. I’m also aware of the fact that many students have a problem with sharing information about what they did during the week so feel free to use my emails as a prompt for questions about the program and what they have been doing.Friday opened with a volunteering/internship workshop that ended with a simulation of things that can happen on a daily basis here in Israel and now as I send this to you on Erev Shabbat, we are about to start a special Shabbat schedule, which will include Shabbat evening in the Old City of Jerusalem, meeting host families and an opportunity for the group to bond

We have a great week planned for next week and a lot of Israel to experience. I know that the students will make the most of it!