Who would have thought that it was only two weeks ago that we arrived in Jerusalem!? Time flies when you’re having fun!

Here are some of the highlights from this week:
Sunday – the first day of volunteering – Most of the students had an interview with their volunteering/internship supervisor. The majority of them started working and began to understand how their company/organization of choice is run and what is expected of them.
For example, Emma told me that working at the Denmark kindergarten has been an amazing experience, “The kids are so cute and only talk to me in Hebrew so it is really helping me to improve my Hebrew!”

Monday – We went bowling to release some pent-up energy. I’d heard that this is a particularly competitive group and now I have seen it with my own eyes! I asked Miranda, who was enjoying her first night out after arriving, how she feels being in Jerusalem – “I love it, it feels like home already”.

On Tuesday we went on our weekly Tiyul. . We went jeeping on the Burma road. This was the road used to break the siege to Jerusalem in the 1948 War of independence. We were surrounded by beautiful views of the Jerusalem mountains and also heard the story of how the Jews circumvented the Jordanians at Latrun and broke the siege to Jerusalem, allowing it to be connected with the future Israeli state. It was so much fun!

This week, Rabbi Marc joined the group for our first Parsha and Pizza evening. The idea of this activity is to offer a brief summary of the events of the weekly Torah portion that is read in synagogues on Shabbat. It also gives the students a chance to talk about some of Judaism’s big ideas and values. This week’s portion, Beshalach, continues the tale of the Exodus that we have been studying for the last few weeks. It tells the story of the Jewish people crossing the Red Sea. Interestingly, soon after the spiritual high of witnessing God splitting the waters the Jewish people begin to grumble. First they complained about not having water and then they said that the water they did have was too bitter, after that they want meat, then they are hungry and so on and so forth. This provoked the question of whether true spirituality can develop in a flash or whether it needs to develop slowly and consistently. We concluded that despite all of God’s miracles and awesome power, religion cannot be forced from the outside; it needs to come from within, from our own hearts and souls. We also learned about the Song of the Sea sung by Moses and the people. The Torah describes Miriam as leading her own song for the women and this inspired our own conversation about women, spirituality and Judaism

This week’s class on the art of reading and writing – slowly started stepping into the world of writing, before taking pen to paper we began by asking important questions about what makes writing good. We discussed what Rilke meant when he said, “If your daily life seems poor, do not blame it, blame yourself,” versus the idea that a work is good “if it has sprung from necessity.” That is, on one hand we should be able to write about anything while on the other, good writing comes from an urge. Balancing between the two applies to all forms of writing. As Suzanne Britt writes, “even if you have one of those teachers who makes you write about, say Guatemala, [what you write about] will be something very exclusive and intimate–something just between you and Guatemala. All you have to do is find out what that small intimacy might be.”

On Thursday – We went to a show at the Yellow Submarine – The show was
Mark Eliyahu – Composer, master of the Kamanche and Baglama, Musical producer and arranger.
– here is a video if you would like to listen.

Next week begins with a special opportunity for the group as we will all go and watch the Hapoel Yerushalayim basketball team in their arena – a 10 minute walk from our apartments.
Regards Natali 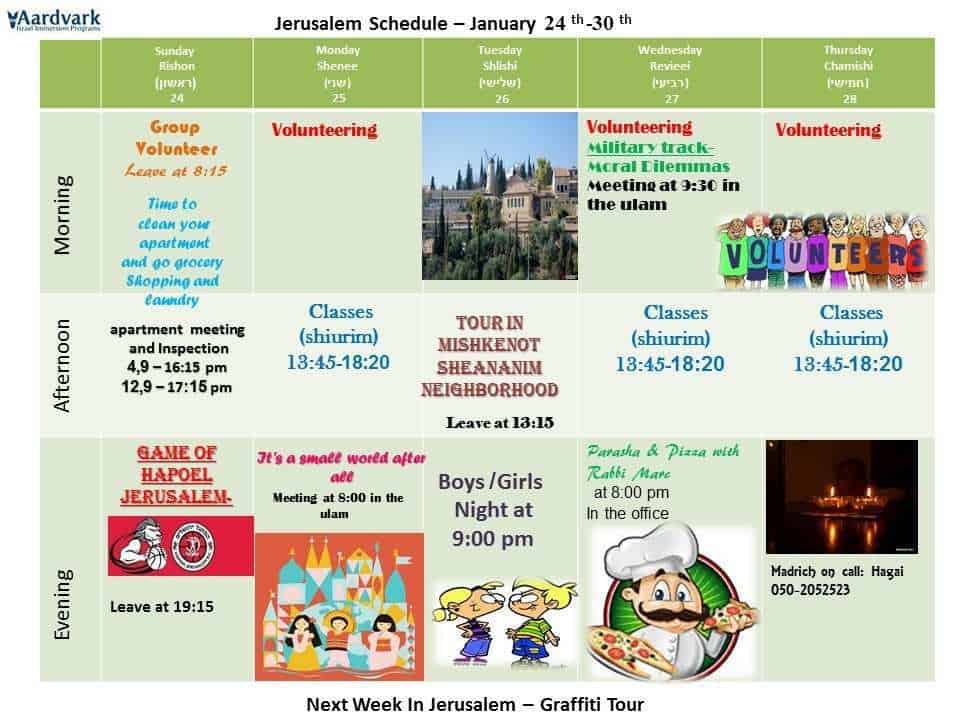