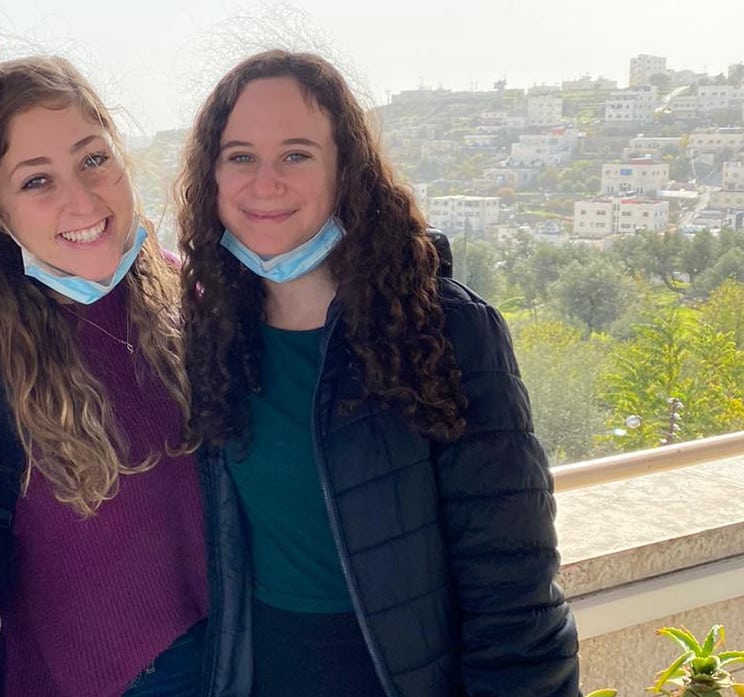 This week on Tuesday, half of the group traveled to Hebron, an extremely controversial yet holy city that houses M’arat Hamachpela (The Cave of the Patriarchs), located in the disputed West Bank territory. Prior to the trip, we learned about the rich history, both biblical and recent, as well as the conflict surrounding the city today. While I had visited Hebron before, I was never fully aware of the political situation beyond the deep religious context of the city. We started our day off touring H2, the section under Israeli control, making our way through two of the four different Jewish settlements. We happened to bump into one of the local residents, Baruch Marzel, a far-right politician who shared his deep commitment to living in the same town that his forefathers settled in thousands of years ago. Lining the streets of the city were IDF soldiers protecting the Jewish community, and after talking to one of them, we learned of their differnet duties. We then heard from Mordechai, the director of the local Chabad who shared about the life of Jews living there and the amazing connection be able to pray at the gravesite of the forefathers on a regular basis. Afterward, we entered the Caves where we saw the gravesites of the forefathers and mothers. It was quite a unique experience to be standing at the gravesite of the most important biblical figures while in a microcosm of this political conflict. Upon leaving the site, we met up with our final speaker, Mohamed, an active member of the Palestinian Authority who shared an entirely new perspective on the situation. Despite leaving with more questions unanswered, I am so grateful that I had the opportunity to deepen my understanding of the complexity and nuance regarding the conflict on both a political and religious scale – Ava Schwartz
The other half of the group visited two sites in the city of Jerusalem, the neighborhood
of Mishkenot Sha’ananim and Mount Herzl. 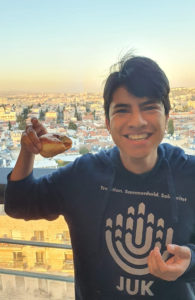 When you think about Jerusalem, many things come to mind. Today, we see a city that is prospering and building up. But what we forget is that Jerusalem was not always the city we know today. 160 years ago, only the Old City existed with the surrounding area barren and desolate. Recently, I was on a tour at Mishkenot Sha’ananim the first neighborhood that was built outside the safety of the Old City walls. However, this was not your typical tour; there was a twist. Our tour guide was not an ordinary tour guide, he was also an actor. Through acting he told us the stories of the neighborhood, the struggles the families went through, and how the families who lived there built the foundation of modern Jerusalem. It was inspiring to learn how courageous people were, willing to risk their lives to make a better life for themselves and their families
-Bernard Netanel 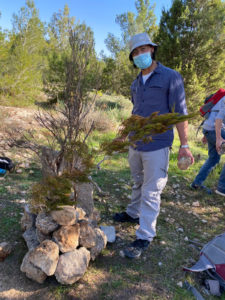 This week on Selah, we explored the inner dimension of Chanukah, through a discussion about miracles and where we may see them in our own lives, as well as an interesting teaching from the Hasidic tradition about the spiritual dimension and meaning behind some of the technical details of how we light Chanukah lights. David from the Temple Institute visited us (we couldn’t go to the museum because of Corona!) He told us about the importance of the Temple and  about his organization, which built the Menorah in the square of the Jewish Quarter of the Old City, ready to be used in the rebuilt Temple. He showed us slides of other implements that they have prepared for use in the Temple.
We also had a guest presenter on Thursday who took us to Park Canada for a day of group bonding activities and Chanukah teachings in light of the Macabees.. 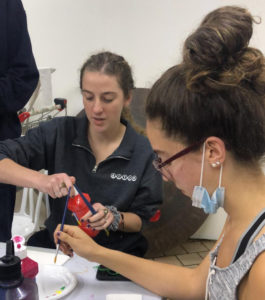 For Hanukka this week, the 23rd of Kislev, our evening program was hanukkiah making. Now, we are both extremely adept at arts and crafts, but most people may not agree. Regardless, it was a great time with all of our friends, listening to music, spray painting, splatter painting, having some rewarding and clean fun. In many ways, the activity was representative of Aardvark in general. The program was centered around Judaism, in a way that was approachable to all people regardless of how religious they are. We both are not particularly religious, but it was nice knowing we were doing a meaningful activity. All that is left to do is to enjoy our first Hanukkah in Israel with our beautiful new hanukiah.
-Howie Scharlin & Avi Price 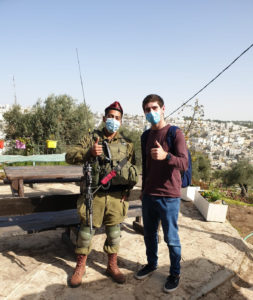 This week, we went to Hebron, the second holiest site in Judaism. Despite spending a cumulative year in Israel during my life, I’d never been to Hebron. So when I heard that we were going, I felt a sense of pride that I would be doing something for the first time, going to the place where Judaism started. We learned about the way of life for the Jews living there. We walked to the Cave of Our Forefathers (and foremothers). We sat in the field and heard Mordecai tell the Jewish side of the conflict, and then heard Mohammed speak about the Palestinian side. My favorite part was that they both prefaced their talks with “I’m not here to change your mind. I’m only here to educate you about the facts.” After that, we went inside the building on top of the caves, where we got to be in the presence of the tombs of Abraham, Sarah, Leah, and Jacob. It was truly wonderful.
-Avi Shapiro 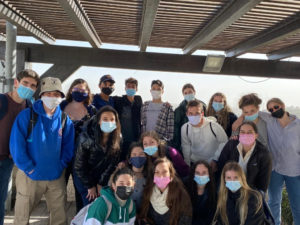 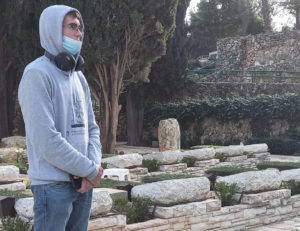 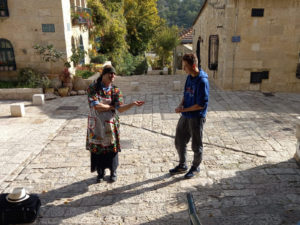 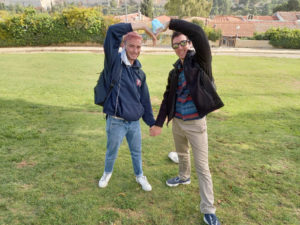 This week we visited Mount Herzl, where we were able to see the graves of some of the great minds that have shaped Israel and Zionism today. We listened to the stories and saw the names of deceased IDF soldiers. The biggest takeaway I had was that most of these soldiers did not die for honor or glory, but simply because they love their country and want to see a day where the violence stops. Mount Herzl is a reminder to us all that we need to strive for peace in the Middle East; that our brave soldiers did not die in vain.
–Joshua Glucksman

More About Our Hanukka activity this week:
Hi, my name is Lauren Cayle, and I am from Milwaukee, WI. After our tiyul on Tuesday, we were able to paint and decorate chanukiot for Chanukah! I was especially excited to do this activity because unlike at home, I didn’t have a chanukiah here to light this year. This is my first Chanukah ever away from home, so it’s definitely different than what I’m used to, but it is very special to be able to celebrate with my new H2 sisters. I am especially excited to participate in ‘Chanukah Harry’ (the Jewish version of Secret Santa) with my friends, as that is something I usually do at home. One thing that is especially interesting is that Israel doesn’t sell latkes, as they are something that people make homemade with families, not just buy from Trader Joes. Sufganiot are different here, too. They taste super authentic and like nothing I’ve ever had before. There is something different about eating sufganiot in the Holy Land. I can’t wait to celebrate Chanukah with Aardvark, and I look forward to our next Tuesday activity. Happy Chanukah! 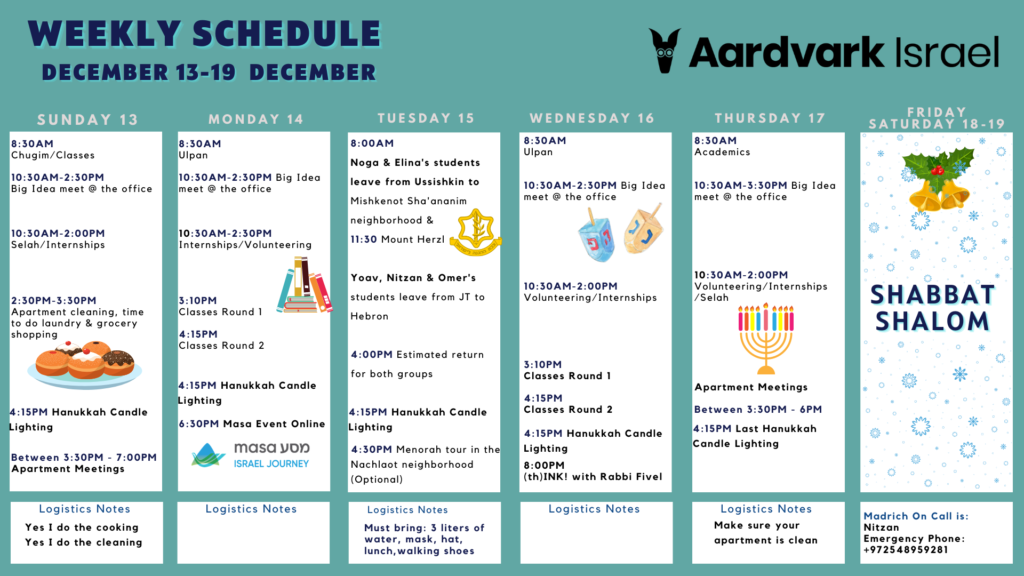 Our counselor on call this weekend is Omer.
Shabbat Shalom,
and Happy Hanukka,
Natali