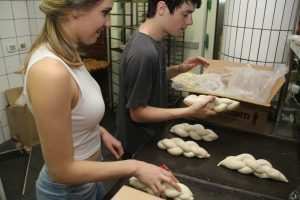 First of all, you have probably noticed that last week’s letter was not sent… I was in China with a group of 30 Aardvark gap year students from Jerusalem and Tel Aviv! It was a wonderful trip but we’re all glad to be back home in Israel!

While I was away, the students in Jerusalem had a great week which included two field trips as a special treat. The first on Tuesday was to Yad VaShem – Israel’s National Holocaust Museum. The second trip was on Thursday to Beer Sheva where the students visited Ben Gurion University, the “Merkaz Tzeirim” (a center for students), a variety of sites in the old city of Beer Sheva, and ate dinner together at a restaurant which claims to offer the best hamburger in Beer Sheva. The trip was a chance to see a different side of the Negev and to gain an insight into why young Israelis are flocking there for university.

Among the evening activities while the China travelers were away were a night at the movies at the brand new Yes Planet theater complex and a night of baking “sfing,” a Moroccan dessert which is similar to a doughnut. And, of course instead of Parsha and Pizza, the students had an evening of Parsha and Chinese food.

This past week there was excitement in the air as the travelers returned and everyone was reunited in Jerusalem. On Monday evening the students were treated to an event run by one of our very own students, Sarah Pomeranz, who led the event as a part of her fellowship with Core18, a project of Jerusalem U. The evening was in honor of the completion of Ezra Schwartz’s z”l Shloshim (the first thirty days after a death) and began with a beautiful slideshow about Ezra. In tribute to the volunteer work Ezra undertook supporting IDF troops the next part of the evening included a viewing of the film, “Beneath the Helmet,” which was produced by Jerusalem U. The movie follows several soldiers through their first months of IDF service in basic training and gives the viewers a unique glimpse into the experiences of the people beneath the helmets. After the movie Eden Adler, who was one of the soldiers featured in the film, spoke to us and told us about some of his experiences in Operation Protective Edge. We had a lot of questions about army life which Eden generously answered for us and of course no event for students would be complete without food… The ice cream sundae bar was a big hit. The event was very interesting and meaningful for many as it gave us a unique insight into the personal stories of a number of IDF soldiers. I would encourage you to also watch the film which is available on Netflix.

On Tuesday for our weekly siyur we went on a cool graffiti/street art tour around Jerusalem. While many people think of Jerusalem as a “holy city,” I think this tour gave us the chance to see a different face of the city – a more modern and hip perspective – plus, in some instances, the art work was truly impressive!

On Wednesday night Or hosted “Cafe Ivrit” (Hebrew Coffee Time) at a local cafe. The students learnt some Hebrew and had the chance to work on their real world vocabulary.

In academics this week the current events class had a guest teacher named Yoav who taught us about the details of the big planned strike that was supposed to occur on Wednesday. Although the strike thankfully did not happen, it’s amazing to think that even just one bus company striking could so hugely impact our daily routine.

In this week’s Parsha and Pizza (which again had an Asian flare to it with “Parsha and Thai food”) we finished our study of the book of Bereishit. From next week on we will no longer be talking about the start of the Jewish family and the lives of the forefathers and foremothers but instead we will be learning about the origins of the Jewish people and the exodus from slavery. The Torah portion tells the story of Yaakov blessing his children. Yaakov almost revealed some great secrets about the ‘end of days’ and the group spent time talking about the Messiah and the Jewish idea of hope. We also noticed how Rashi’s commentary on the blessings relates most of the twelve tribes to the land of Israel. Yaakov made his children promise to have him buried in Israel and not in Egypt. This gave the group an opportunity to talk about the magic, mystery and wonder of our current State of Israel.

Next week we are going to the Abu Ghosh neighborhood just outside of Jerusalem to eat some of the best hummus in Israel and we are also planning a wine and cheese tasting (put together entirely by two of our students on the culture committee).

Best wishes for a great week,