I’m sorry that last week’s weekly newsletter wasn’t sent to you, I was leading the International Track’s trip to Germany.

Here are this week’s highlights:

We started our week with the weekly inspection. At the inspection Tally, the madricha for apartments 6 and 12, cooked a special dinner with the students Jordan, Jonah and Scott, they made Chinese food with vegetables and chicken with rice rolls. It was really nice to see that the students have progressed from making food just to eat and started to enjoy the process of cooking and used their creativity to invent some new dishes.

year in israelTuesday was a very interesting day. During our excursion we learned about Israel’s first right wing Prime Minister, Menachem Begin, by visiting a museum dedicated to his life’s work from his time with Haetze” l (the Irgun), through his first election victory, peace with Egypt and up to his resignation due to heart break after the first Lebanon war.
In the evening the students were given a lecture by Yariv Oppenheimer, the leader of “Shalom Achshav” (Peace Now), an organization that is known for its left wing Ideology. At the lecture we learned about Shalom Achshav’s idea for a two state solution I order to maintain the Zionist dream. The students were so eager to hear his thoughts that they didn’t let him leave for almost three hours. Jordan said that he finally heard someone who can explain how a two state solution can work without giving up Zionist ideals and without making Israel the “bad guy”.

On Wednesday the military track went to Ammunition Hill to learn about the battle that occurred there during the Six Day War. They started their tour with a movie explaining the war and then went into the tunnels and acted out what it was like to fight there. Daniel said that even though he has been there before, this time the personal story of the soldiers that fought there made it into an unforgettable experience.

On volunteering for MDA (Magen David adom) by Aaron Kahn:

“Working with MDA gives me lots of insight into the real Israel. Over the last few months I have been working on an ambulance and the ability to help people is something which gives me great joy. I get to learn about many different ways of life and interact with people to get a better appreciation for Israel. I’ve gone to calls from car accidents, CPR, working on standby at sports games, the Jerusalem marathon and more. Throughout my experience I have been able to gain lots of knowledge and drastically improve my Hebrew. Being able to make someone’s day better makes me feel like the small part I play makes a big impact on the lives of people I help. I have completed my EMT course and have received my certification making me part of the Israeli work force and putting a positive contribution into Israeli society.”

Next week we are going up north to the Golan for two days. 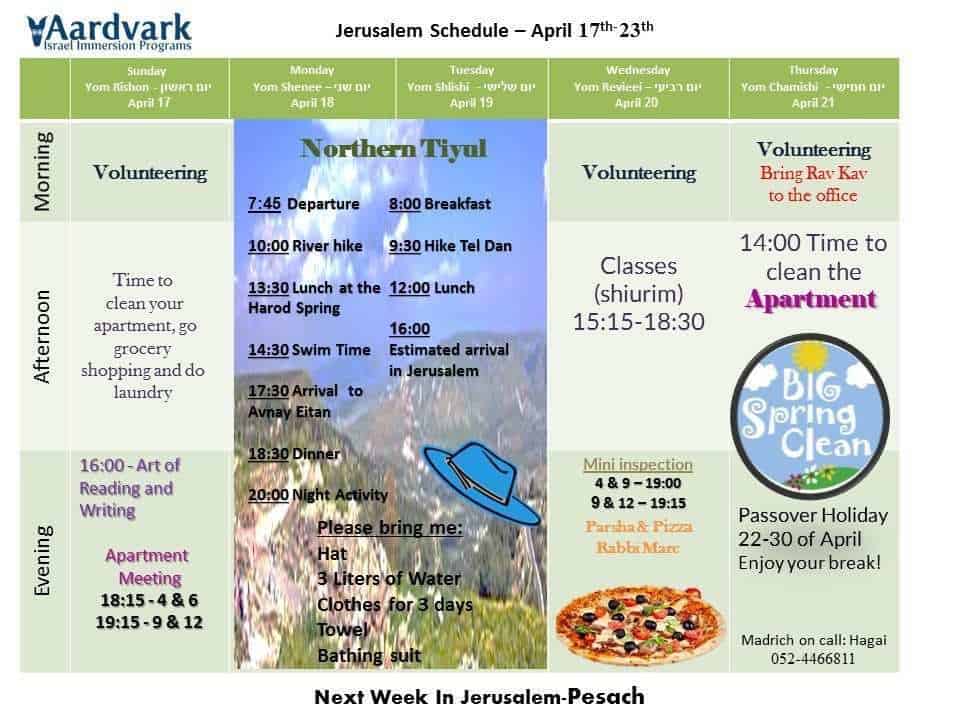