I can’t believe that the Jerusalem experience will soon be over, but we still had plenty to do this week. Here are the highlights:

On Monday night we had a Hanukkah shirt making and Sfinge Donut making session. Sfinge is a Moroccan Hanukkah donut. We had so much fun making donuts and making our own version of “Ugly Hanukkah Shirts”. We played Hanukkah music, danced and sang. Maya Fox said, “I’ve never had so much fun on Hanukkah. Being with my Aardvark family, celebrating Hanukkah, and being surrounded by so much love and light really had me wishing we could stay in Jerusalem all year long.”

On Tuesday we headed to the Israel Museum where we met up with the Tel Aviv group. At the Israel Museum we saw an exhibition called “Faces of Power”. The exhibit contains 75 gold coins that are decorated with the portraits of 40 Roman emperors — and three usurpers — as well as the likenesses of 13 women who were members of the imperial family. These coins tell the story of the Roman gold currency for a period of more than 300 years, from the end of the first century BCE to the beginning of the fourth century CE.

We also saw an exhibition about different types of menorahs from various countries. We saw menorahs from Afghanistan, Iraq, Morocco, Poland, Syria, and more. We were in awe of how beautiful they were and how incredible it was that even in places where there aren’t many Jews, they still lit the Chanukiah and celebrated the miracle. We then had time to walk around the museum and we saw exhibits on Modernism, Design, French Art, and an exhibit by an artist called Ai Weiwei. Yaeli Rabinowitz said “I really loved learning the background story of Hanukkah, and seeing the different menorahs that my ancestors used. “

Afterwards we walked together to a local café called Nocturno where we had dinner with the Tel Aviv group. After the lighting of the last candle of Hanukkah, we heard two speeches. One from a student from Tel Aviv, and another from Jerusalem’s very own Ricky Studenski. Ricky spoke about his experience on Aardvark and how much he learned and grew from the program. Although the majority of us are continuing next semester in Tel Aviv , there are a few of us who will not be, and this was an emotional night where we had the opportunity to say goodbye to all the friends we made from both cities and say thank you to the staff for all they have done for us.

For Volunteering and Internships this week: “Working with the One Family Fund was such a meaningful experience for me. This organization really focuses on the wellbeing of victims of terror and their families and it such a beautiful thing to see. I had the privilege of working on a project called “The Memorial Room”, which creates online memorial pages for victims of terror attacks since 2000. This project really had an impact on me because instead of these people just being names, they had faces and stories too. The One Family Fund is an incredible organization and I’m so glad I had the privilege of being a volunteer here.” – by Liat Dorani

This week’s Parsha and Pizza changed location to my house and became sushi and salad. I spoke about some of my experiences working with Aardvark students and told the group what motivates me to work in education. Rabbi Marc was also there, as always, and summarized the weekly Torah portion of Vayigash. It describes the climax of the Joseph story where he finally reveals his identity to his brothers. We looked at Yehuda’s role in the Parsha and how we as Jews are named after him (Jew in Hebrew is Yehudi – יהודי). Yehuda represents responsibility and leadership as well as the ability to admit mistakes and to change. Great qualities for us to emulate.

Selah wrapped up its activities for the semester. On Monday we had an unforgettable opportunity to meet with a Holocaust survivor, Charles Siegman. Charles is originally from Holland and told the story of his childhood there and his time in the Theresienstadt Concentration Camp in the Czech Republic. Although he lost his parents in Auschwitz, he was able to survive the war together with his brother and sister thanks to some forged Panamanian diplomatic papers. He even showed us the Tefillin his brother used in the camp and some of his identity papers. After the war he was sent to the USA to be with his uncle and remained there until 15 years ago when he made Aliya. Charles encouraged the group to keep faith in God and remain connected to Judaism.

After our time with Charles we went to Zariffa, a local community cafe, where Rabbi Marc led the group in a final reflection session and summary of the semester. We remembered all the people and teachers we had met and listed all the places we had visited. We calculated that the Selah group has completed more than 240 hours of Jewish studies and activities. Some achievement! Thursday’s Learning Space saw us conclude our weekly learning and each teacher ran a review of the materials studied. We also had time for a moving closing ceremony with Charlie, our fantastic Selah Madricha who has given so much to the group. Selah continues next semester in Tel Aviv for those students who wish to continue. Finally, Rabbi Marc wanted to take a moment to thank the group for being truly special and for growing and learning so much throughout the semester. You parents should be truly proud! 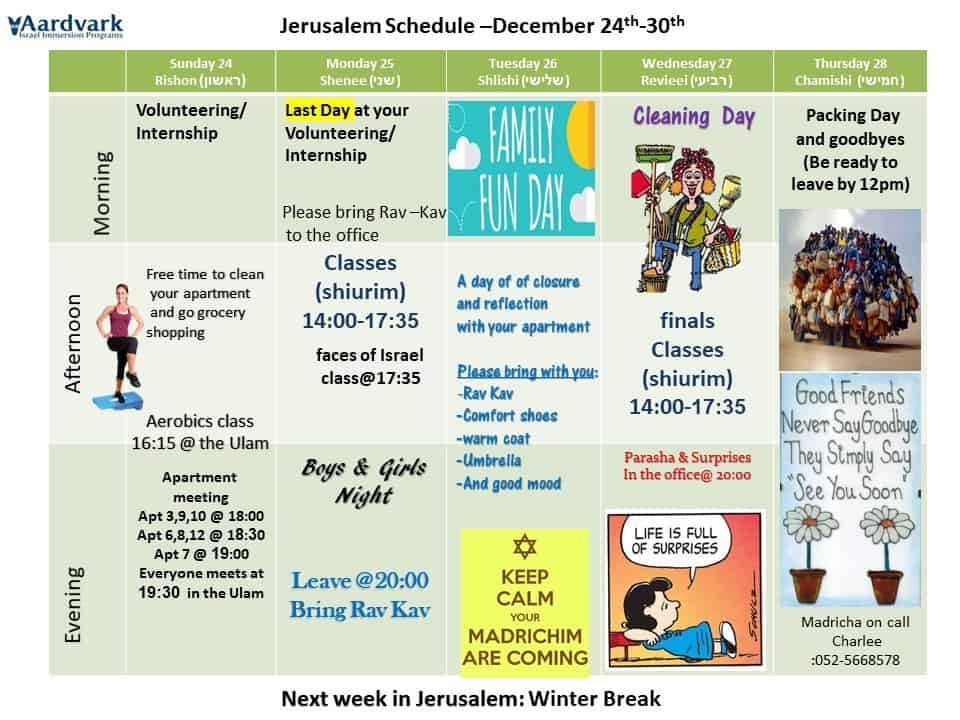