The rainy week has ended and at last the sun has come out. It is a beautiful time to be outside so we are encouraging the students to go out and explore more of the city.

On Sunday the culture committee organized a fun night, American in style, watching the Super Bowl and eating pizza. Although I did not see or understand the game, it was certainly wonderful to see that our students can organize an amazing evening by themselves.

On Monday night we took the students to the winter festival in Jerusalem called “Shaon Horef”. Every Monday during the month of February a different part of the city is flooded with events including concerts, dance productions, dance parties, cooking classes, art exhibitions and more. Thousands descend upon the streets of Jerusalem to enjoy the local vibes and talents while having some authentic Yerushalmi fun. It was nice to see our students going out to experience the city despite the cold.

KnessetOur Tuesday we had a tour of the Knesset. The Knesset is the legislative branch of the Israeli government. The Knesset passes all laws, elects the President and Prime Minister (although the latter is ceremonially appointed by the President), approves the cabinet, and supervises the work of the government. We started by going through security, which was an experience in itself, and then began the tour. We saw the Chagall Hall and the room where all the Knesset members vote. We also learnt about the voting system and how laws are passed in Israel. Danielle said that it was one of the most practical ways to see how this country works. The most interesting part of the tour was to hear about Gal Nurick’s (our student) experience volunteering there with a Member of Knesset (MK).

MenorahThis week in Parsha and Pizza we spoke about the Torah portion of Teruma. The portion describes the design and planning of the mobile temple that the Jewish people took with them on their travels across the desert. It was called the Mishkan. The Torah describes all the materials needed to build the Menorah, the Ark of the Covenant and the other utensils to be placed in the Mishkan as well as their dimensions. All the gold, wood, fur, cloth, silver and curtains were donated by the people. We spoke about the importance of spirit in donating and giving. The Torah describes the Jews as contributing to the building with “generosity of heart” and this led us to reflect on the billions of dollars raised by Jewish philanthropists across the world each year. Perhaps giving and donating is part of our Jewish DNA. Finally we learnt about the Ark of the Covenant and how it was covered with gold outside and in. Some commentaries took inspiration from the Ark and say that it teaches us to be consistent and make sure our insides match our outsides. It really can be quite a challenge to be authentic!

In Contemporary PoliticsIn Contemporary Politics we have spent the week focusing on the subject of the settlements. We took out a map of the West Bank and pinpointed the different blocs of settlements and learnt about the size, population and ideologies of the different settlements. We focused on the 1992 Oslo Accords that divided up the West Bank into different sections – Autonomous areas for the Palestinians, Jewish areas for Israel to control and areas that are jointly administered by Israel and the Palestinian Authority. We followed the path of the separation fence that was constructed in the middle of the Second Intifada in 2002. We mapped out the green line that represented the Armistice between Jordan and Israel at the end of the War of Independence in 1949. Finally we explored the different attitudes towards the West Bank amongst the Israeli political and military echelons in the late 1960s.

In Volunteering this Week by Jonah Mills
Grad-Train helps individuals from across the world successfully apply and study at universities abroad. On Grad-Train subscribers are given a prediction of their chances of being accepted and admitted to US schools. Additionally, members of Grad-Train are paired up with mentors who have previously studied abroad for 1 on 1 video chat meetings to provide advice and answer questions or concerns that may arise through the application process. Jonah is volunteering there working on the system. He is based in a Start-up hub in the middle of Jerusalem. Another unique experience……

Next week
We have a tour of the Sataf together with Israeli school students – we will take advantage of the great weather and visit a nature reserve located 10 km west of Jerusalem. In the area, there are two beautiful springs, “Ein Sataf” and “Ein Bikura.” 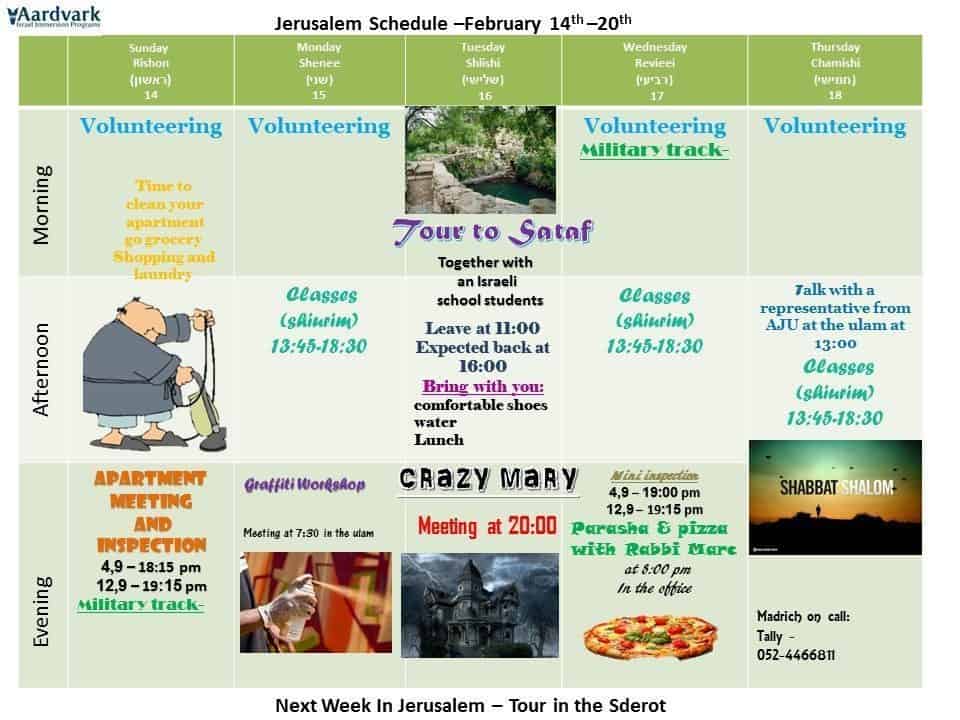