Another special week has passed here on Aardvark Jerusalem. As you know, we paused our week for Yom Kippur, which was Tuesday and Wednesday, and then returned for one day of our normal routine before the holiday of Sukkot begins. We use this special holiday season as an opportunity to learn about and celebrating the Jewish holidays and their traditions in Israel.

Here is a little about what we did this week:

On Sunday morning, the Selah Track went on their second experiential Jewish tour, learning and experiencing Tashlich at the Mamilla Pool. They then continued to the four Spahardi shuls in the Jewish Quarter for a “Sofer STAM” (scribal) workshop where they tested their artistic skills and ability to focus by scribing their names in the book of life, preparing for Yom Kippur. From there they continued to Mea Shearim, an Ultra-Orthodox neighborhood, to experience the Kaparot tradition performed with live chickens and discussed animal practices in Judaism.

On Sunday afternoon, some of the students attended an annual ceremony sponsored by the Association of Canadians and Americans in Israel (AACI) in a nearby forest in Sha’ar Hagai. The ceremony was dedicated to American-Israeli and Canadian-Israeli soldiers who fell defending Israel and victims of terror. It was a very special ceremony and we were proud to be a part of it.

Galya Wornovitzky said, “The AACI was a ceremony to remember Israel’s fallen soldiers. A meaningful experience and a ceremony I will never forget. The speeches were interesting and the singing was beautiful.”

On Sunday evening, all of the apartments met the Madrichim in the Moadon for a slightly different apartment meeting than usual. The students were split up into five mixed groups and each was given a team color. They were then presented with the “Aardvark Street Challenge”, an activity run by the Madrichim to make the students step out of their comfort zones, have fun, and learn our neighborhood a little better.

Each team were given a list of challenges to complete within 45 minutes around town such as: dancing the “Hora” at Zion Square, asking strangers what they like about Jerusalem, blowing the Shofar, and taking a picture while wearing a soldier’s beret.

The students really got into it, running around the area of the Shuk, Nachlaot, Ben Yehuda, and town, being very creative, laughing a lot and taking part in random and funny challenges.

When the time was up, the students gathered back in the Moadon to announce the winning team! We all watched some of the hilarious and creative pictures and videos they took during the challenge to prove that they completed the tasks.

In the end, the winning team was the YELLOW TEAM! Their prize was a personal Ben & Jerry’s ice cream!!

Zak Kornfeld said, “I got to meet Israelis on the street, practice my Hebrew, blow a Shofar, juggle falafel, wear a soldier’s beret, pretend to be a mannequin, and so much more! It was so much fun, and even though my team didn’t win, it was a great activity and a real bonding experience. I also want to say Thank You to the Madrichim Tamar and Rafi for planning a really great night!”

On Monday evening, some of the students met for the first Culture Committee meeting. The culture committee consists of students with ideas and the desire to help their peers make the most of their time in Jerusalem. They help plan activities for weekends and throughout the semester.

Eliana Cohen said, “It can be hard to be away from home for the first time but we want to make it just a little bit easier and a little bit more fun. In the Culture Committee, we want to plan different events to remind people of home, and most of all just have a good time. We want to bring holidays like Halloween and Thanksgiving to Aardvark! We all get together about once every month and plan activities that everyone wants to do.”

Also on Monday evening, some of the students took the opportunity to venture out into the streets and experience Selichot the night before Yom Kippur. Selichot, the singular of which (selicha) means “forgiveness” in Hebrew, are penitential prayers and poems that are often recited in Jewish communities starting on the Saturday night before the Jewish New Year, or Rosh Hashanah, all the way through to Yom Kippur, the Day of Atonement. Jerusalem was filled with the sounds of Jews praying and it was quite an experience.

Tuesday, was Erev Yom Kippur, each student chose the synagogue that he or she felt most comfortable attending.

Ben Newman said, “You could tell that the whole city was readying for a day of fasting and self-reflection: stores closed early and the streets were left empty, cars replaced by groups of people in white going to pray. At night, we walked to the Western Wall and I felt an indescribable energy in the movement of hundreds of bodies and the intersection of different melodies of the same prayer. The day of Yom Kippur is when the kids take over – flying through the empty streets on bikes, big wheels, and whatever else. In the morning, I sampled two different synagogues: the reform synagogue and the Great Synagogue, each with a different brand of Judaism. I spent my afternoon in the park during the fast, taking a nap while others played cards. It was a spectacle to be in a city that sounded like the countryside. After the final blow of the shofar, breaking the fast was a relief. We talked about the year ahead with our new Aardvark friends!”

On Wednesday evening, after Yom Kippur had ended, Leah Matthys organized a break fast for the group.

Leah Matthys said, “Yom kippur in Israel was such an amazing experience. At home, I really love the spirituality of the holiday and we always end with a big, family break the fast where we sit down and have dinner together. I really wanted the family meal experience, but since I don’t have blood family here I did it with my Aardvark family. I organized a Yom Kippur potluck with my friends in my building and we sat and ate homemade food on the roof after 25 hours of no food or water. It was so much fun and it was so nice to spend that time with people I love, since this is the first High Holiday season I’ve spent away from home and I was really missing my family. I hope every Yom Kippur can be this meaningful.”

Thursday in Selah, the students went to Shuk Arbat Haminim (the lulav, etrog, arava and hadassim) and learned about the four species of Sukkot.

On Thursday afternoon, the students built their Sukkah. It is a mitzvah (good deed) to build your Sukkah after Yom Kippur. The students played music and had a really great time while putting the Sukkah together and decorating. For some of the students, this was their first time building a Sukkah.

Internship in the Spotlight: “My name is Eli Klausner, and I’m interning at Re/Max Real Estate. During the one month I’ve been there, so far, I’ve attended open houses, met a dozen agents, learned how business works in Israel and helped to create their brand new website, which is still a work in progress. I’ll be at Remax for another couple of months, and I can’t wait to see what other opportunities come my way!”

Next week, we begin the holiday of Sukkot, we will have a graffiti tour in Nachlaot, Café Dilemma, and Sukkot programs including Birkat Kohanim at the Kotel! 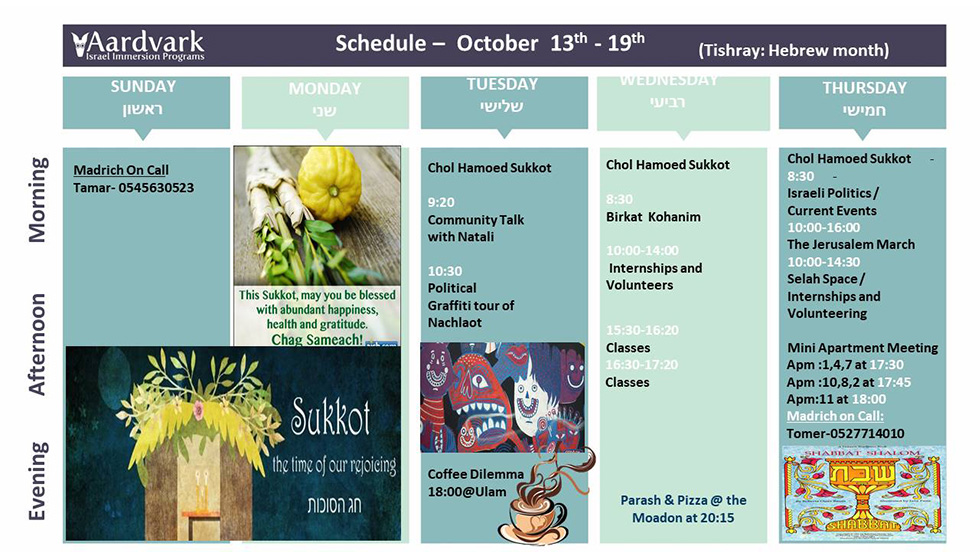 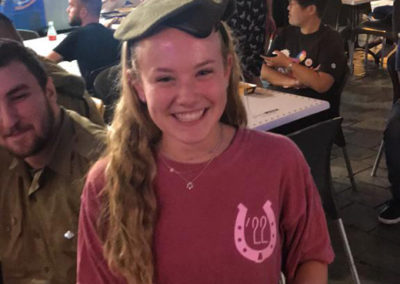 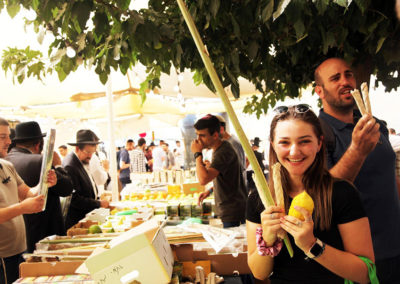 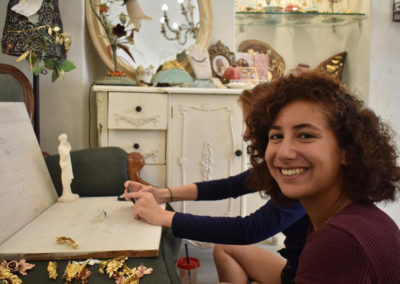 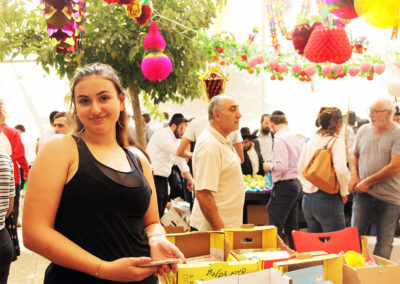 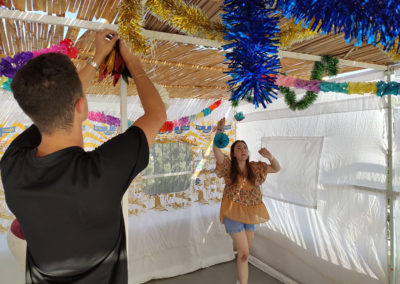 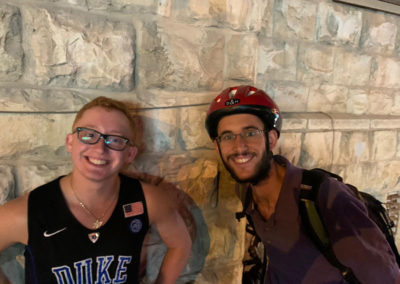 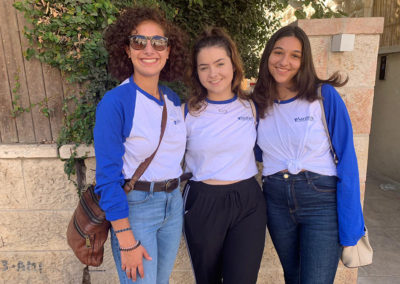 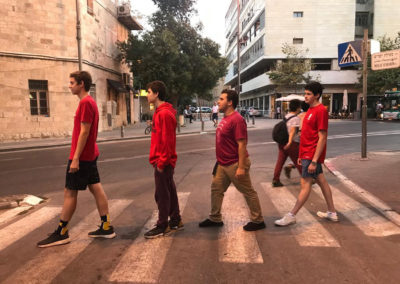 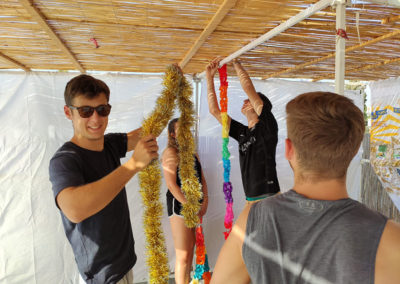 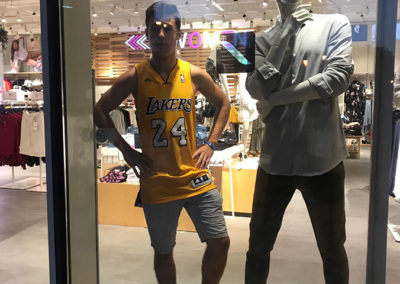 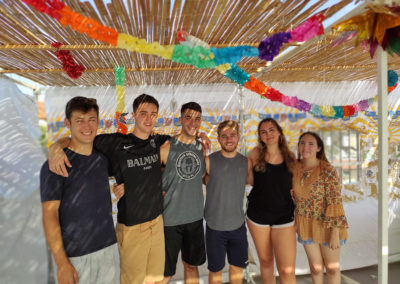 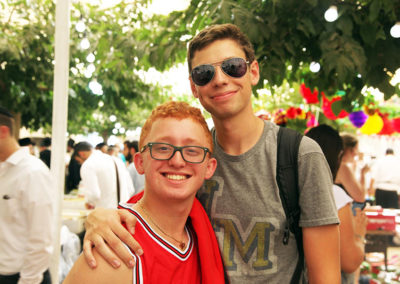 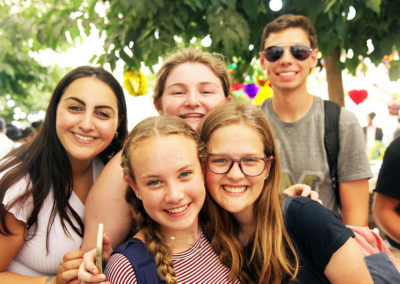 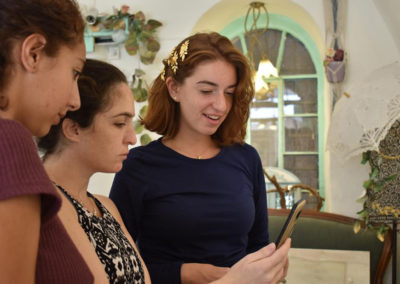 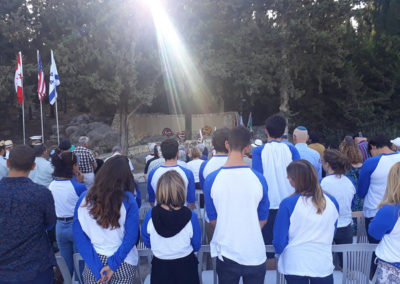 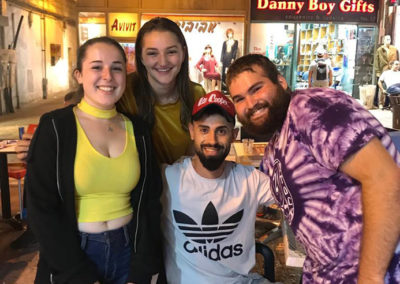 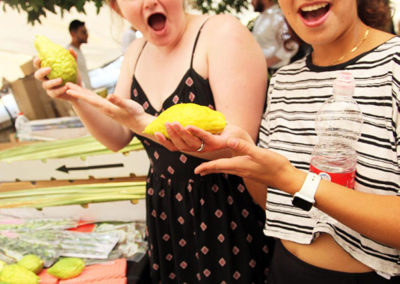