All week long the sun was out making us sweat (except for today). T-shirts and shorts came out of the closets and a whole new season has begun. 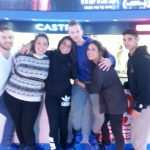 On Monday our students went to the ice rink and skated for a while. Reina and Adam showed off their figure skating ability. Scott, while skating for the first time, won a skating race. 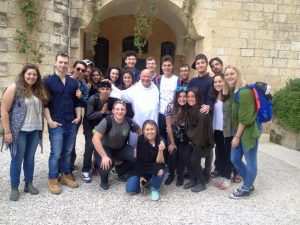 On Tuesday we went on a day tour to Abu Ghosh. We started the day by visiting a local Mosque. The students were pleasantly surprised by how pretty it was. We spoke to a representative from the Mosque and he answered some of our questions. Afterwards we went to a local hummus restaurant where we enjoyed a delicious ethnic lunch. Tourists and Israelis alike come from all over Israel to enjoy the Hummus made fresh in Abu Ghosh. After lunch we visited a monastery where we met with a very special monk, Brother Olivier, who has celebrity status in Israel. He is the one person that educates soldiers about Christianity. He moved to Israel in 1977 after being inspired by watching Paul Newman in Exodus and hasn’t looked back. Coming from France his English was very good but his Hebrew is much better. During his talk the students were mesmerized. We sat in a beautiful garden in a Benedictine monastery and the local mosque began broadcasting its call to afternoon prayers over the loud speaker in a peaceful Arab neighborhood just 15 minutes outside of Jerusalem. After sitting in the garden we went into the church where Brother Olivier sang for us. He sang beautifully and the students couldn’t get enough. The acoustics in the room made it sound as if he was singing with a choir. After sharing a story with us about making friends with a high ranking policeofficer and how they would sing together he began singing Adon Olam, a classic Jewish song that comes from the morning service. Again, it blew the students away. We ended the tour = with Brother Olivier saying the following “I hope I don’t insult you or make you upset, but if I was a 20 year old Jew like yourself I would move to Israel immediately. There is no better place in the world to live”. It is clear that the man embodies peace and the students returned to the bus saying that if there were more people like him in the world then it would certainly be a happier place.

On Tuesday evening the girls and Hagai did Zumba. We burned some calories while dancing to Taylor swift and Nurit showed us her true dancing ability. 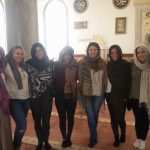 This week in Parsha and Pizza we completed the book of Shemot/Exodus with the Torah portion of Pekudei. Over the last five weeks we have been deepening our learning about the Mishkan – the mobile sanctuary that the Jewish people transported with them during their wanderings in the desert. After detailed weeks of planning and building we finally came to its construction and dedication. Together we learnt some ancient legends, Midrashim, about how God miraculously put up the whole Mishkan and how Moses himself was honored in the process and we discussed the balance between human and divine force in Judaism.

For the past week and a half the Military track have been learning how to navigate, a skill which is usually only learnt by commanders in the army. We learned the difference between a peak and a valley and then on Wednesday we went on a hike in Gvaot Goral where our students navigated through the field. It was beautiful to see how the students understood the field and felt very confident in where they walked. Gedalia said that now the hills are not just hills but a part of something that he can understand better. While navigating the students learned what it was like to lead a group, show confidence and the meaning of decision making and planning ahead.

Next week we will go on the Underground Prisoners Museum Tour and take part in Good Deeds Day, a day entirely devoted to helping others during which many Israelis volunteer in order to contribute to society.