Dear Parents
This week the students enjoyed a number of activities about the society we live in. Here are a few of the things we did.

gap year programOn Monday the students attended a Masa BDS seminar at the Yehuda Hotel. They were joined by other Masa programs with students from Australia and South Africa. The day was broken into several parts starting with speakers who explained what BDS is and why it is so problematic. We broke up into discussion groups to internalize all of the information and share our opinions. After a delicious lunch we split up once again and everyone chose a field trip. Some went to Gush Etzion to hear from a settler and a Palestinian. Others went to Maale Adumim to see factories where Arabs and Israelis work side by side. The last group stayed in Jerusalem and heard from an inspirational terror victim. After we returned the students joined various workshops where they learned how to put their experiences and knowledge to use. Overall it was a very eye opening and interesting experience and sparked many conversations among the students. Many of them said that this was their favorite Masa experience so far!

Tuesday was the national day of doing good deeds. Our students went to clean the beautiful forests surrounding Jerusalem, Even though it was a bit cold our students were able to collect 20 bags of garbage while enjoying the magnificent scenery around them.
Afterwards we went to the Underground Prisoner’s Museum which was once a prison used by the British Mandate. Our tour guide led us through the museum and talked about the different resistance organizations – the Palmach, the Irgun and the Lehi – that operated in the period before the establishment of the State of Israel. She also talked about the difficulties the Jews of Jerusalem faced under the British Mandate.

gap year programTuesday night, in one word, was “Amazing”. Out of all the improvisation rehearsals, workshops and classes that I have either led or been a part of the energy in the room that night was something special. Almost immediately everybody was ready and willing to act dumb, try, fail or succeed. Essentially, they were ready to play. There was not one person in the room who didn’t understand at least the basics of what was needed to do to move forward in improvisation. We started with a couple of warm-up games to get them loose and carefree. Afterwards we continued to different listening improvisation games where they really had to focus on each other and not pre-plan what they were going to say or do. Then we ended with a couple of scene games so that they could put together everything we had talked about up until then. The greatest part was that according to the plan I had made earlier with the staff I was going to be done at 9pm after an hour and a half. But amazingly at 9pm I tried to wrap up and they really wouldn’t let me. We went on another 30-40 minutes. I loved it and so did the students. There was amazing energy in that room and I would happily do it again with this group anytime.

gap year programThis week in internship by Miranda Levingston
I love my internship at the Jerusalem post. I am treated as a real member of the staff, always getting leads on different stories, whether it’s about a wine tasting event or LGBT rights in Israel. Because I’m an intern they always save the fun stuff for me to do. I recently had an email exchange with Jason Derulo which was cool. I also lead my own press conference last week with an organization that I was covering and was the youngest person there by at least two decades. It’s an amazing life experience and it’s challenging and fun all at the same time.

On the Military track this week we learned a skill that our students were hugely looking forward to…. how to shoot a gun. We went to the Olympic shooting range in Herzliya and learned all about gun safety and how to shoot correctly. We got to practice on 6 different guns.
Then on Wednesday we really got to understand the meaning of Zionism and what it means nowadays to be a Zionist. We watched the famous movie Boufort about a military outpost in Lebanon. Over all, this week was exciting and meaningful for us all.

Next week-
We’re going on a trip of two days to the South in order to learn why the South is so important to the Jewish people and see the areas which make it truly magical. 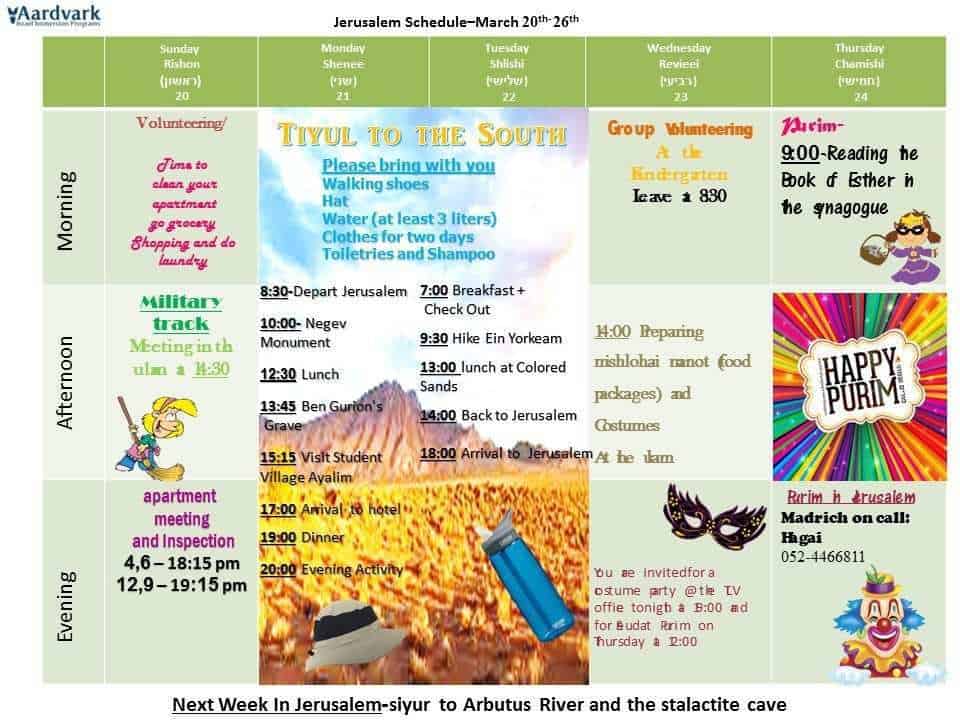