What a crazy week we’ve had! Complete with a serious rain storm, poppies – as promised, and some sunny days towards the end!

So what happened in the hallways of Aardvark Tel Aviv? 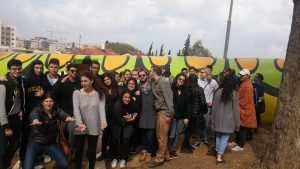 On Sunday night both the Jerusalem and Tel Aviv groups attended a Masa “Back to Campus Event.” Dinner was provided for the students and they were given the opportunity to mingle with participants from other programs. Simultaneously there was an activity fair happening in the adjacent room with booths set up by about 15 Jewish and pro-Israel organizations. We circulated, talked to the representatives and even got some free swag! The next part of the evening was a series of table discussions, everyone split up and went and had a more in-depth conversation with an organization that interested them. After a short intermission, where we were entertained by some beatboxers, we split up again and the students met in groups based on the universities they will be attending next year.

On Monday a Boys & Girls talk took place in the office. A company called open door came to lead this talk and asked us, the staff, to make ourselves scarce in order for the students to feel free to talk about their personal lives. The two groups did the talk in parallel, a group of boys only and a group of girls only. It sounded like the students had a lot to say! After talking to some of them it seems that they have a great a variety of opinions.
The aim of the workshop was to present Israel’s culture regarding gender and sexuality. The boys were all agreed that “it is extremely hard to develop an intimate relationship with an Israeli girl” (I don’t think it is true, but I live here…). 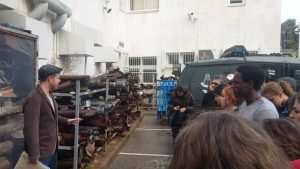 For our weekly siyur we toured the city of Sderot together with the Jerusalem group. Sderot is located less than a mile from Gaza. This town has suffered thousands of rocket hits over the years. During the tour the group visited the local police station and saw the missiles that have hit the town in the past, known as Kassam rockets. Toward the end of the tour the group visited Sderot’s sheltered playground, showing a bit of the absurd reality that the children of Sderot live with. The whole tour was led and organized by the Sderot Media Center, a non-profit organization of citizen journalists that also serves as a news agency, dedicated to bringing the voices of Sderot’s residents to the forefront of world news.

During the tour I was walking with Jake Wisotzky. We were talking about how difficult it is to live in this reality… Jake had a lot to say so I asked him to write it down for me and for permission to show it to you. (He agreed!)
– Jake included a video that is not so easy to watch but it unfortunately emphasizes the reality of living in Sderot…

“On Tuesday February 23rd, we took a trip to Sderot. I have never been to Sderot, but I remember seeing a video about sderot that was filmed in 2008. Here is the link: https://www.youtube.com/watch?v=ygb6VrW8WZw&feature=youtu.be. The video was captured by a man named Noam Bedin. Noam just so happened to be our tour guide. He was able to provide Aardvark with a very thorough tour. This video had a big impact on me. It was the first time that I really understood that that Israel is being targeted for no good reason. It’s real life and was filmed as it happened. Noam’s video is important because it demonstrates what the people of Sderot go through on a daily basis.
Now, you’re probably wondering what this rubber duck is. This duck has been traveling with me all over the world since 2013. I have always enjoyed capturing beautiful sites featuring the duck. This specific site is over viewing Sderot and Gaza. So beautiful, yet to the left we have a tree made out of missiles that were launched into Sderot from Gaza. On our right we have a menorah also created with missiles. The glory is demonstrated when you realize the people who are having rockets launched at them almost daily are able to turn their dark times into astonishing creations. That, my friends, is a beautiful site to me, and even more beautiful when paired up with my duck. I’m extremely grateful to have had the opportunity to visit and share my experiences.” 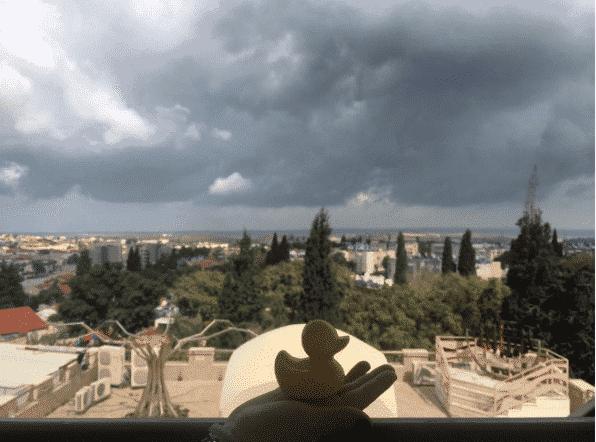 Thank you Jake!
After an interesting tour and a good lunch which was also provided by the Sderot Media Center we went to see the blossoming red poppies. The sight was beautiful! Green hills covered by yellow and red flowers! The students loved it. They were running and fooling around trying to make the most of it! I think that this is definitely is in my top 5 tours of the year!

On Wednesday yours truly led an “Acro Balance” workshop. It is an acrobatic sport based on cooperation, body balance and a little bit of self-confidence. A small group of students decided to test their limits and stood up to the challenge. We had a wonderful time! The workshop took place in a beautiful park in Neve Tzedek. Danielle Williams seemed to be a natural acrobalance girl! We had a wonderful time together! On the way back to the office we noticed that a smelly cloud of dog poop was following us… We wanted to blame Ian, but then we realized that during the workshop we all swimming in it. Instead of complaining and whining about this we were all laughing our hearts out! – Maybe Israel is changing your children?!

Aaron Glenn is doing his internship with Rabbi Josh, also known as The Sports Rabbi. Rabbi Josh is extremely involved in the world of sports in Israel. He is the person to talk to about building soccer or basketball teams, he gives a lot of lectures and runs activities based upon day to day issues in Israel and combines them with sports such as a talk on how the Israeli-Palestine conflict manifests itself in the world of Israeli sport or what the connection is between the way Israel was established and the country’s sports teams.
Aaron’s role is to write reviews and articles of basketball and soccer games. Which means going to a lot of the sports event happening in Tel Aviv.
Click Here to get an example of Aaron amazing work! 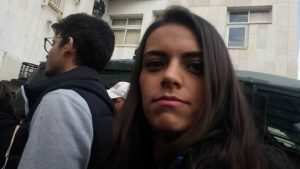 On the Entrepreneurship Track the students had a “Creative Thinking” workshop. During the workshop they were asked to think of creative solutions to daily problems. For example something that is brought up a lot is how to help students on Aardvark find their cell phones (they lose them a lot). The person running the workshop asked the students to bring ideas without boundaries of resources etc. They came with up with really cool ideas. The thing that was beautiful about the workshop is that the students were helping to develop each other ideas.

On the Mind & Body Track, the students met Lior who ran a “Gibberish workshop”. The purpose of the workshop was to emphasize the fact that 80% of what we are trying to say is independent of the words we use to say it! – Anyhow hearing the students talking Gibberish for an hour is hilarious!

In Introduction to Psychology, for the past couple of weeks Dr. Smith has been teaching the students the functions of the brain. The function of the brain is to control behavior and movement. Humans learn to search, explore and manipulate our environments and the brain must obtain information about the world. The brain processes information about objects such as their size, shape and location. Without the stimulation of the brain it cannot orient and direct the body to produce an appropriate response.

This is all for now,
Shabbat Shalom 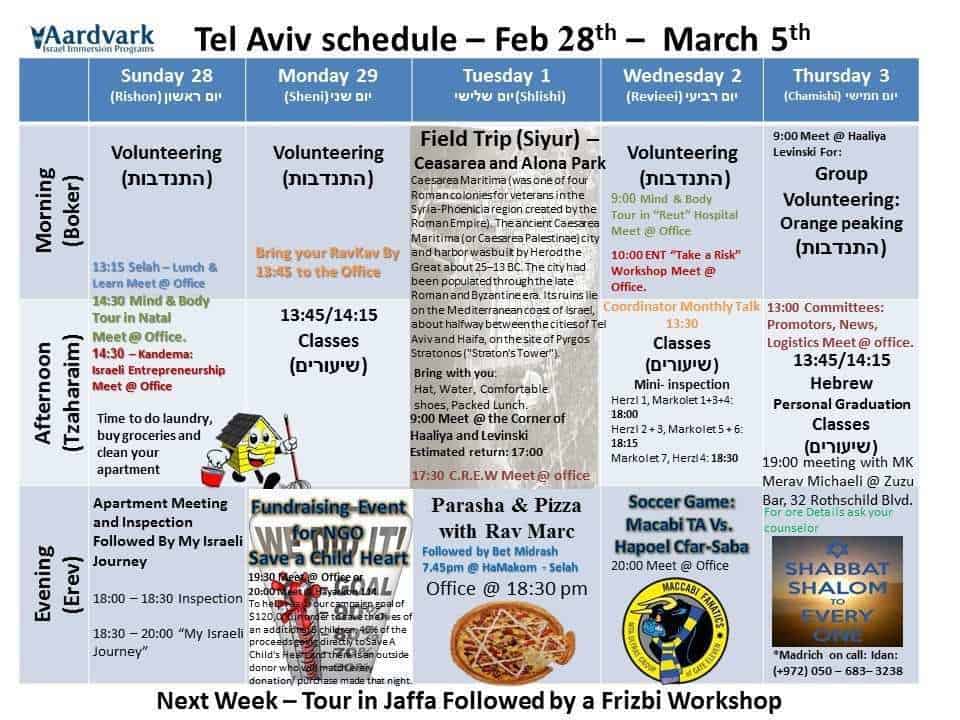