Click to start a new application or login to an existing application.
12 / 100

A First-Timer in The Old City during COVID

A First-Timer in The Old City during COVID

There’s one thing the Old City in Jerusalem has that most other communities across the globe do not – a deep history. And I felt it. Walking into the Old City for the first time felt like entering a different time period. It’s not that it looked different; the same Jerusalem stone made up the buildings, and people walked by like any other part of the city. Maybe it was the cobblestone that has seen millions of footsteps, or the layers of history buried underfoot. But something about being inside the Old City walls made me feel like part of something monumental, bigger than myself.

I’m not sure exactly what I expected, but it was downright easy to get into the Old City. There was no real gate, no security guard checking bags. When we walked past the walls of Jaffa Gate, we were suddenly inside.

It was sad to see that many shops, restaurants, and cute cafes had their doors shut to the public due to the pandemic. For someone who’s never been inside during a normal year, it was heartbreaking. I can imagine it’s even more devastating for those who dedicate their livelihoods to living in the heart of the Middle East, and sharing their passions with tourists and people around them.

As my friend and I made our way toward the Western Wall, we maneuvered through narrow alleyways filled with running children and happy families. In those parts, there were some shops open, their owners desperately trying to sell anything they could in these hard times. I was told by one of them that usually hundreds of tourists stroll the streets, buying mementos and souvenirs to that they can remember their visit to the Old City. We passed by places selling jewelry of all kinds. Handmade bracelets, hamsa necklaces, and gold earrings were only a handful of what we saw. There were also shops selling bags, sandals, hats, and antiques of all shapes and sizes. The diversity of items was refreshing and beautiful. It’s also easy to see how hard it has been for these people, as well as business owner across the world.

I’ve been wanting to buy a new ring since arriving here in Israel, and saw the perfect opportunity at a little jewelry place. If there’s anything you should know about Israeli shops, it’s that bargaining is key, and something I’ve gotten used to doing regularly since living here. I’ll give this owner some credit though, he was a good seller. He showed me the engraving of real gold on the inside, and let me try on different sizes and materials before I chose the one I wanted. After a lot of bartering and negotiation, I ended up buying it for a good price. I like that it’ll remind me now of the quirks of Israeli lifestyle, and the beauty and experience of the Old City.

Finally, we got past the shops and found the entrance to the Western Wall. There was a brief security check, and then we could pass through. Prayer areas were sectioned off because of Corona, and much emotion was in the air. My friend and I sat down and wrote our notes to add to the wall, and it felt so special that even as a writer I felt hesitant to write something that wasn’t perfect. We made our way to the women’s section of the Kotel where there were only allowed a few people at a time, and waited a few moments before being allowed in.

When I first touched the wall, I felt a surge of emotion. Everything the world has gone through recently, all the hardships I’ve felt about leaving home, it all came to me at once. But it felt positive, like we can all get through this. There’s something amazing about a place so impactful, even a pandemic doesn’t have an effect on its importance. It felt like the hearts of those around me were closer, like we were all connected somehow. Women all around me were crying and praying, so obviously overtaken with emotion about this special place. This is where Jews from around the globe turn toward when they pray, a sacred place thousands of years old.

Visiting the Old City was something I had wanted to do forever. The world has lost many things this past year due to COVID-19, but one thing that will not be affected is the impact of faith and connection to special places like the Kotel (Western Wall). It amazes me how some things never seem to lose their significance no matter how tough things get. Exploring more of Jerusalem has made me feel lucky to get to experience such rich culture, especially seeing all of it for the first time. If you’re thinking of going to see the Old City, I would definitely recommend scouting the narrow passageways for unique shops. And of course, touching the very wall that is a significant part of the history of Israel. There’s certainly nowhere else in the world that encompasses such distinctive archives and people. 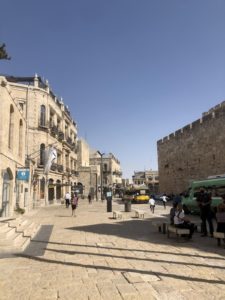 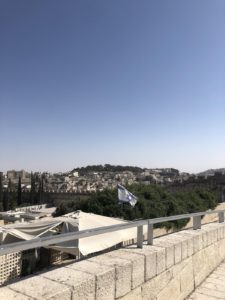 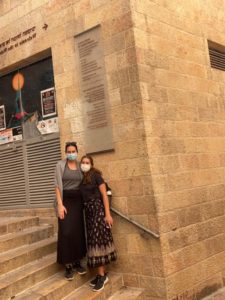