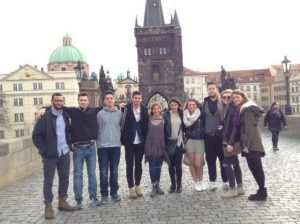 Prague, the capital of the Czech Republic, has emerged as a vibrant and exciting city after long years hidden and stifled behind the Iron Curtain.. Prague’s historic and cultural values is as rich and varied as the many spires which adorn the rooftops of its buildings.  Having survived centuries of expansion and modernization, Prague is still renowned for its heritage and has been venerated with titles such as “the city of a hundred spires” and “Golden Prague”. These attributes are deservedly bestowed upon this majestic city built upon the Vltava river. The countries rich Jewish legacy will be explored, and you will have the opportunity to trace the rise and fall of the Jews of Prague in the preserved synagogues and infamous Theresienstadt.

Our visit to Prague will allow you to experience major tourist sites, including but not limited to, the Charles Bridge, Prague Castle, a beer hall, the old town, and the world renowned Cesky Krumlov (a small city in South Bohemia) while also participating in a local Prague Shabbat. 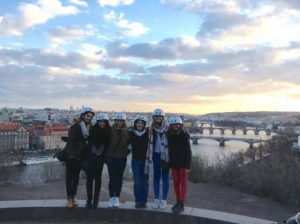 We will tour around the historic Old town, making sure to visit the old town square with its unforgettable astronomical clock.  From there, arrive at Charles Square to see the statue of the Maharal of Prague, a great leader of Prague’s Jewish community in the 16th Century. There are many legends about the Maharal, but his most famous is that he created The Golem of Prague fashioned from clay, using mystical powers based on the esoteric knowledge of how God created Adam.  This legend, states he created the golem to defend the Jews of the Prague Ghetto from anti-semitic attacks; particularly blood libels emanating from certain prejudiced quarters. At this point we will pause and see if we can recreate the ceremony and bring back the Golem – we could use him right now. Then we will continue onto Wencesles Square, a bustling commercial center with street artists and thousands of people.

Take a tour of the world famous Charles Bridge and the Prague Castle, and continue on to Petrin hill to get fabulous views of the city. Then spend some time on Kampa Island to see the Charles Bridge from a unique perspective. Afterwards have some free time to shop and hang out along the Vltava River and in Mala Strana (in the Lesser Town). In the evening we will experience some Czech culture by attending a concert.

Be a Bohemian for a day and travel to Cesky Krumlov – The medieval town of Cesky Krumlov is one of the most charming Czech towns and a pride of the Southern Bohemia region. Its architecture has been preserved through the ages thanks to the area’s peaceful history. In the 1990s, the historic center of Cesky Krumlov was skillfully restored to picturesque beauty, drawing visitors from all over the world. The castle and Chateau of Cesky Krumlov comprises second largest castle complex in the country.  The castle’s exterior courtyards and Italian style gardens are not diminished by the richly designed interior rooms with exquisite views visible from the castle towers.

Start the day by delving into the political world of Prague at the Communist Museum and contrast it to what you experience today. Visit of one the few remaining Jewish cemeteries in Europe which is the resting place of 200,000, including some more notable occupants. Then, get a unique opportunity to visit the Israeli Embassy and meet diplomats to discuss the special relationship between the two countries. Return to hotel and get ready for Shabbat and then experience Friday night Services at the Old- New Synagogue, the oldest working synagogue in Europe Services will be followed by Friday night dinner in the Community Center, and an Oneg with local Jewish community.

Shabbat morning – optional services at the Old-New Synagogue – followed by lunch and a tour of the Jewish Quarter. Prague’s Jewish population has lived in this area for centuries but was nearly wiped out during World War II. Today, the Jewish Museum administers a number of synagogues, such as the Old-New Synagogue . The Pinkas Synagogue serves as a memorial to the victims of the Holocaust with almost 80,000 names inscribed on its walls. The Jewish Synagogue also oversees the astonishing Spanish Synagogue along with numerous others. All of the synagogues have been beautifully restored and house priceless exhibits collected throughout the past. We will also visit the statue of the Golem and if we did not successfully bring him back to life the first time we will have another go here.  We will then make havdalah and head to U-Fleku Brewery for a traditional night in a Czech beer hall with music and singing.

Day trip to Theresienstadt – The Terezín Memorial in the town of Terezín was built as a Baroque army fortress by emperor Josef II in the 18th century and named Theresienstadt after his mother, Empress Marie Therese. The fortress served as a prison almost from the very beginning and became notorious as a Gestapo prison, Jewish Ghetto, and concentration camp in World War II. In the years 1941 – 1945, Terezín became the largest concentration camp in Czechoslovakia. Over 140,000 Jewish men, women and children were brought there from around the country, as well as from Germany, Austria, Holland, Denmark, Slovakia and Hungary. The majority of those who survived the forced labor, malnutrition and terrible living conditions were later transported to the extermination camps further east. Terezín was turned into a memorial in 1947.  Travel back to the city for last minute shopping and hanging out in the Center of the City.

Jews have lived in Prague since 970 C.E. and it is thus one of the oldest Jewish communities in Europe. Jews were heavily persecuted in the first few centuries there, but fortunes improved dramatically in the 16th Century, allowing for a blossoming of Jewish culture and a transformation of the community into one that was accepted. Many leading Jewish personalities were accepted into the highest social circles and made a name for themselves in the Jewish community and beyond. At the beginning of the 18th Century there were more Jews in Prague than anywhere else in the world and they accounted for 25% of the city’s population, until they were once again expelled. They returned a few years later and rebuilt a vibrant Jewish community, with a strong Zionist base. The majority of the Jews in Prague were murdered in the Shoah. Of those who survived, the majority emigrated to Israel, before communism suppressed all other vestiges of Judaism. After the fall of communism, Jews slowly identified themselves again with their religion and today they community is starting to rejuvenate itself. There are 3,000 members of the community with a further 10-15,000 Jews suspecting of living in the Czech Republic but not registering with the Jewish authorities. This trip will allow participants to explore this rich Jewish History, learn about some of its most important personalities and see how it is attempting to establish itself again after the destruction of the Shoah.  Czechoslovakia was also one of the first countries to recognize Israel in 1948 and one of the few countries to send armaments to the newly established state. This relationship has been renewed since the Velvet Revolution and we will spend some time learning about the relationship between Israel and one of its staunchest allies in Europe, the Czech Republic.