The group arrived in Germany this morning safe and sound after an uneventful flight. After heading through passport control they made their way to the tourist Information desk where they picked up unlimited ride transportation tickets – exploring the city like a local will be a part of the experience

The hostel we are staying at is very nice and homey. In fact, everyone there refers to it as “The House.” It is filled with young travelers from all over the world and the atmosphere in the lobby and dining room is full of energy. Hostels are very popular throughout Europe (and Israel) and the students are getting a great taste of the “hosteling” culture through their accommodations. I’m sure they’ll come back to Israel next week with a long list of countries from which they met people and hung out.

After lunch, the group headed out to begin touring the city of Berlin museum.The tour started out in a bunker the building itself was built in 1976 during the Cold War and the bunker was set up as a first come first served place of refuge. From the bunker the students explored the history of Berlin from the Prussians to the rule of the Bismarck from the ww1 to the ww2. After that we went to drink same coffee and took the train to our second destination.

The Jewish Museum. Perhaps the best way to describe the museum is “Jew 101.” The exhibits cover an extremely broad range of topics within Judaism, Jewish history and culture, and nearly all the visitors of the museum were young German groups who were there to essentially learn “what is a Jew.” To some of our students, it felt like we were being described to them as nearly extinct, like the dinosaurs. The experience was overwhelming in some ways – there is so much content in the museum. Everything from the basics, like what is a kippah, to an exhibit about Levi Strauss who was a German Jew. The students enjoyed seeing the displayed replica of the first pair of jeans. The architecture of the museum is simply incredible and perhaps he highlight of the experience of exploring the site was the “Hall of Void.” This space was designed to give visitors time to reflect and fill the space. There was a lot of empty space in this huge area of the museum and it was vast and powerful.

Next they walked over to Checkpoint Charlie, the best-known Berlin Wall crossing point between East Berlin and West Berlin during the Cold War. The students found it neat to see this historical site and imagine that in that same spot, Soviet and American tanks briefly faced each other.

In the evening the students headed out to a classic German pub for dinner. They are enjoying sampling the local cuisine and they were impressed with their meals.

Overall, it was a great start to the trip and everyone is happy (and tired). 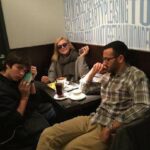 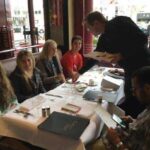 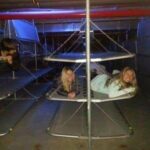 Another great day in Germany and it’s not over yet! This morning the group headed out early and started the day with a tour of the Reichstag. The building which houses the German Parliament is a fusion of the old and the new. There is a distinct blend of 19th and 20th century architecture and was redesigned to accommodate politicians and the public. The highlight of the tour is the ascension of the dome and terrace which allows for a 360 degree view of the city. The students loved the experience. Visitors walk up a spiral ramp and then down another spiral ramp so you are always looking out at the view of the city. In the center of the dome is a mirrored fixture which creates a cool effect as well. Each visitor is given an audio guide which all the students agreed was amazing, interesting, and informative.

Berlin is a very big city and the students are doing a lot of walking. So after a quick break at Starbucks,

I decided to surprise the students with a Segway tour.

The group headed to the memorial for the murdered Jews of Europe. This site is a massive area filled with stone blocks. They start our shallow and low and as you move through the space they get taller and deeper. Although it is a memorial site, it is not uncommon to see people sitting on the blocks, children play between them, and although the architectural effect is intense, the atmosphere is less so. However, the memorial also includes a museum downstairs which had a completely different tone to it. As you walk through, you can hear the reading of names of victims and stories of the people’s lives who perished. This coupled with the visuals created the effect you would expect from a Holocaust Memorial.

The memorial is located next to a huge park in the middle of the city and at the entrance to the park is Brandenburg Gate. As the group walked through this massive stone arch, they learned about its history and the significance. Today it is considered a symbol of the tumultuous history of Europe and Germany, but also of European unity and peace.

After lunch the next stop was the East Side Gallery where they had the chance to walk the length of what remains of the Berlin Wall and view the murals which were painted on to it by artists from all over the world. A collection of images representing a huge range of topics, the students really loved seeing all the art and trying to decipher the political messages displayed in many of them. Appropriately, Gil found a mural of DJ equipment (in Tel Aviv he interns at Joy Records). In addition to our students, there were tourists from all over the world visiting the site and the students found it interesting to hear how many languages they were suddenly surrounded by.

For Shabbat dinner tonight, we visited an extremely popular restaurant called Burger Meister. They loved the food and really enjoyed the authentic atmosphere. 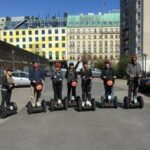 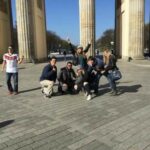 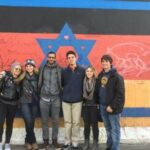 In a travel guide about Germany it says the following the “implosion of Germany’s history” Berlin became a city which is constantly “embracing change and pushing forward.” What the students saw and did today illustrated that completely.

The morning began with a tour of former concentration camp Sachsenhausen. Just an hour from the center of Berlin, this camp was established in 1936 and operated through May 1945.

In addition to serving as a detention camp and later extermination camp, it also became a training center for SS officers. Only 15-20% of the prisoners of Sachsenhausen were Jewish with the others detained there including criminals, Communists, homosexuals, Jehovah’s Witnesses, and gypsies.

After an intense morning, the students had lunch at a local restaurant at Sony Center and then We met our guide at Brandenburger gate. Unfortunately because the Germans are a very punctual with their times, we managed to miss the tour by 2 minutes. This did not break the spirit of the students so we decided to create our own tour and visit the coolest places in the city that we had heard about. We created an alternative tour. So we started our alternative tour at the Exhibition of Paul Jackson Pollock known professionally as Jackson Pollock. He was an influential American painter and a major figure in the abstract expressionist movement. He was well known for his unique style of drip painting. The exhibition was stunning and students were especially excited that they can draw on their own and print their work then.Then we went to the market in the city of museums, and walked the alleys of graffiti paintings of local artists. We finished our tour at the fake beach near the riverside that the Rastafari movement of Berlin created. We watched the spectacular sunset and then went to dinner at a Tapas bar. 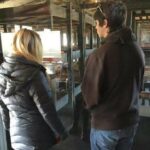 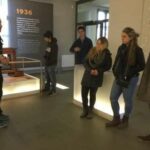 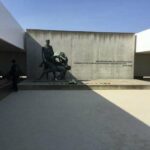 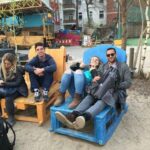 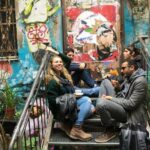 Today we started off the day at Mauerpark. It’s a very large park and hanging out there is a popular pastime for locals and tourists. Sundays is a popular time for street musicians, vendors, and others to be set up in the park. It seems that on some level, everyone goes here. The students saw budding fashion designers selling their creations, t-shirt vendors, and even garage-sale type set ups. There was plenty of street food to be tasted as well.

Then we went to the team escape game that was a huge hit! The students had a great time and succeeded in solving the mystery and freed themselves from the locked room. Had they lived in East Berlin before the fall of Communism, we’re sure they would have made it over to the West with no problem.

In order for us to recognize Berlin and eat delicious local food I decided to take the students on a foot tour of Berlin. We met with our local guide that took us to the student quarter of Berlin, there we ate some German stew and then we got to taste some of their famous beers. Later on we went to an ice cream shop, ate pizza, drunk some shoko, went to a bakery and ate burekas (because of the large population of Turks).

If you ask me, and the student would agree, you can understand fully the culture of country through their food. Good food=good time.

Even though it was raining that day, it did not bother us because of the delicious food and the amazing people we met on the way. On the way to one of our stops we got to see an ancient synagogue that during the holocaust, the Nazi’s used it as a car garage. It was amazing to see that even though the Nazis destroyed most of the synagogue, the Jewish community and the government of Berlin got together and restored it in such a beautiful way.

As one of the biggest cities in Europe, the cultural scene in Berlin is a huge part of the experience. In order to emphasize that to the student we took them to see the “Blue Man Group” an alternative show filled of laughter, tears and emotion. At the middle of the show, one of the actress even came to the audience and made them a part of the show. Gil, was even so lucky to be chosen to be stared at for 5 minutes in the middle of the show by one of the actresses. It was beautiful to see the special bond that the show managed to create with Aardvark.

Since the students didn’t have enough Chinese food in China, we decided to go to dinner in the biggest Chinese restaurant in Berlin. After the show we went on a tasting tour of the blue men group- has toured the globe with their “Megastar World Tour”, a rock concert parody, appeared on the Norwegian Cruise Line ship The Epic, released five albums, contributed to a number of film scores, performed with orchestras around the US, and appeared in advertising campaigns for prominent brands. 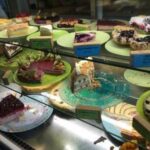 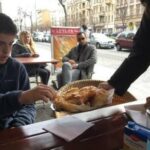 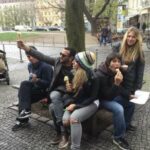 We started our beautiful morning at the classic remise cars of Berlin. It was a beautiful collection of cars all through the ages. It started with collective old cars and went all the way to the futuristic moto vehicles.

As Kobi said, it was his best experience, almost as much as he believes heaven would be like.

After lunch at the best pizza place there is in Berlin, we went to the embassy of Israel. Over there we met the Assistant Ambassador who told us all about their work in the biggest embassy in Europe (and the second biggest Israeli Embassy in the world.) Afterward we met the Ambassador of Germany, Yaakov Hadas Hendlsman, who was interested in the Aardvark International Program. He even said that he wants to participate. Our final destination was Alexander Platz, one of the largest shopping center in Berlin, there we did our final shopping and even rode a mechanical bull. 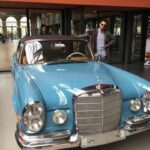 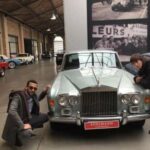 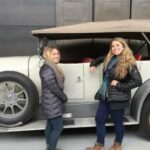