Perhaps one of the most amazing things about spending time in Israel is the ability to visit locations where significant events happened in the bible. While on your gap year you are sure to go on many hikes and many of which will have biblical roots and routes.

For example, you may visit the Elah Valley, which is where the future King David famously defeated the Philistine giant Goliath. There is a wonderful hike that you can go on between the ruins of the ancient villages of Azekah and Shaaraim, near Beit Shemesh. As you climb up towards Azekah you will pass a number of plaques with biblical verses and you can then make the choice between a long hike (10km) or a short one (5km).

While in the area it is also worth visiting Tel Lachish. Lachish was a Canaanite city that fought against Joshua in the Battle of the Amorite Kings. It is a fascinating archaeological site where remains have been found dating all the way back to the Neolithic Period, 8300-4500 BCE.

You could also visit Mount Tabor, where Deborah fought together with General Barak against the Canaanite King Jabin and the head of his army Sisera. Deborah, with the aid of 10,000 warriors, overcame Sisera’s force of 900 iron chariots on the mountain. Today, you can enjoy a 6km walk up from the bottom of the mountain and perhaps get a sense of what the battle may have looked like.

Another famous battle location is Mount Gilboa, between the Jezreel Valley and the hills of Samaria. It was where a battle took place between the Philistines and the Israelites led by King Saul. From the top of Gilboa you can enjoy amazing views of the Kinneret, Haifa, and on a clear day, Mount Hermon. It is a very easy hike and there are two possible routes. You can take a 1km circular trail that goes along the edge of the cliff or a 2km trail that goes down along the ridge.

Perhaps one of the most famous bible stories is that of Sodom. Lot flees the city ahead of its destruction and when his wife looks back to her former home, she is transformed into a pillar of salt. Today, there are some amazing hikes around the area. If you follow the blue trail, you will have to climb 250 steps and three ladders, but the rewards are spectacular. You will be greeted with panoramic views of the Dead Sea and the Moav mountains. The hike is 7.5km and you will also have the chance to explore some salt caves along the way.

There are of course many more biblical sites you can hike in Israel such as the Tzurim Valley in Jerusalem and Mount Carmel next to Haifa. All of them are worth a visit and hopefully you will be able to enjoy many of them while on your gap year. 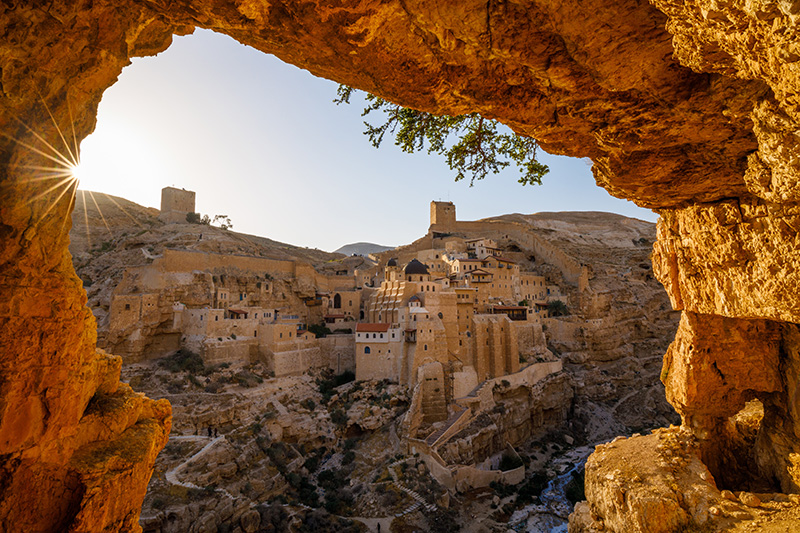