Student of the Week – Jonah Dafilou

“My Year in Israel”

To Live
The other day I was walking down Florentine and I couldn’t help but feel a gut pain. As I walked by the graffiti I’ve come to know every detail of and pass familiar shop owners, I saw the last 5 months flash before my eyes as I suppressed the nagging thought of completion. The end. The streets of Tel Aviv have our names on them. We came here and we did something. Some of us may have done more exploring. Others may have worked more and some people went off on their own to find their own path; with, or without Aardvark.

Fun and Love.
Lately, I’ve been asked a lot about how I would describe my Aardvark experience. Whether I would characterize it by the walks through Tel Aviv seeing the restaurants, stores, galleries, beaches and city that you’ve come to know and make memories with. Or the countless inside jokes that are, essentially, nonsensical. Or whether it is about the friends you make and the fact that it’s so hard for us to even fathom that we are at the end because we can’t even imagine not seeing each other every day.

Dedication
I came to Israel with the primary focus of leaving my small bubble-of-a town to explore and enjoy myself. The international track with Aardvark made me super excited.
I asked my boss for extra hours and I cut my spending. I worked tirelessly for 8 months between the time that I had left Israel last year and when I left for Aardvark. Last year I spent 8 weeks in Israel but left an incomplete journey.
Coming to Aardvark, I was ready and excited.

Adventure.
One of the most incredible trips that I have ever taken was when we went to Ethiopia. Visiting places like Gondar, Lalibella and Addis Ababa we saw amazing views, a humbling culture and a Jewish people singing familiar prayers and songs.

When we were in Gondar, I met a young boy named Daniel. He came to me and began to ask about America. He told me he wanted to be a doctor and come to the United States for University. He spoke perfect English and was so excited. He lived in a small mud-hut, no bigger than our apartment rooms and at age 11 had already learned English. After exchanging emails and staying in contact, I saw how determined and smart he was. I thought of all the privileges I had and I wanted to be like Daniel. I decided I would not leave Israel having missed a single opportunity.

Come home from Aardvark without saying what-if. Or take it as a lesson that there is always a chance to do something great and take advantage of what you have.

My International Family.
Ethiopia itself was fantastic. To see people we had never met before, people of which whom I have not even ever been in the same continent as before, practicing the same language and traditions that I had in my synagogue was baffling. It was funny because this is what made me realize how interesting and unique the place that I lived in was back in Tel Aviv. We live among people from the other side of the world, from places we’ve never been before. We have the opportunity to live among people we would likely never meet in our home towns. I’ve come to learn about so many different backgrounds of people from so many places. It’s not common to be friends with people from America, Switzerland, Norway, South Africa, Australia, Panama, Israel, Canada, and The Netherlands all in one place, exploring and coming to know a foreign city in the Middle East.

When I got here, I was presented with a multitude of opportunities and was able to find really interesting ways to dedicate my time. My choice was to my internship.

Experience
I worked at StarTAU, an entrepreneurship center in north Tel-Aviv near Tel Aviv University. I chose to work in the International Department with my boss, Hila Glick. After learning the ropes the first couple weeks, I started to ask for extra work and after about a month of working hard, I was given my first task. I worked on something called the 3C Smart City Challenge.

I essentially got to work with startups from around the world and pick certain ones that both me and our sponsors found applicable to a next-level Smart City ecosystem. The winners of the competition were given a deal in which their technology would be used to facilitate the construction or allow a city we were building in Croatá, Brazil to function more efficiently.

I moved on to work with really cool people including. Simon Sinek, Mark Zuckerberg, CEOs of Venture Capital firms, high level executives in tech giants such as Apple, Google, IBM…

Sacrifice
The fact that I, a 17 year old kid who is supposed to be in high school right now, was given an opportunity to work on such a serious job with these insanely intelligent people was something that I was so grateful for.

I actually quit my job though and as highly as I speak of StarTAU, it was the right choice. I was given an ultimatum. Organize and execute one of the largest Innovation Seminars in the world: TAU Innovation and leave Aardvark or to quit and find something else.

I thought about it for a long time and what led me to my final conclusion was really thinking about what each really was. StarTAU was a place in which I could work hard, learn and work on valuable and important things.

Aardvark is a multinational immersion program in which you can travel to Africa, Europe, Asia, America and more that allows you to choose or set up your own internship, learn a foreign language and live in the best part of an amazing city.

We’ve lived here, some for 9 months, some for 4.5 some for more or less. We’ve grown used to things and we’ve grown to miss things. But soon, home, that which you have missed will return. But your normality that was some crazy adventure every day in Israel will subsist. Aardvark will be over. But it was perfect.

Appreciation.
Think about the scenic views on the bus rides to a tiyul every Tuesday. About how we went to a different place each week that would have some obscure, but amazing historical significance. Think about walking across the hallway to see your best friends there to greet you knowing that this place is your home and you’ve made it so.
The trips camping on the sea, going on crazy adventures and the familiar raised tone of Israelis speaking Hebrew will not persist like it did on your stay here. But that doesn’t mean we’ve lost any of this.

To Grow, Remember and learn.
I was in high school this year. I went from sitting at a desk each day only to be followed by a long day at work to having an apartment in the heart of Tel Aviv going out night after night finding new graffiti, or seeing the next town over or checking out that the weirdest and coolest bars and even meeting the greatest artist in the world. He has a studio on Eilat street!

To Be Amazed
But I want to share with you all the most important thing I’ve come to understand this year. We’ve all heard the old cliché about taking advantage of everything on this program. But I had experience in this. I remembered leaving Hod Hasharon last year and thinking about all that happened and the fact that it was over and I didn’t’ know what to do.

This year in Israel, I didn’t and still won’t let that happen. When you all go home, look back on your experience on aardvark and don’t think “what if.” Just sit back and be amazed at what happened. Be amazed by being able to live on your own.

Be amazed at all that you’ve done here because it was worthwhile.
It was a journey of a lifetime that you will never forget

We’re all going to go home in a few days. Some of us might be traveling Europe, others might be working and some of us are even staying in Israel. But what happened in Aardvark Israel 2015-2016 will always be with you.

Thank you Aardvark, I am amazed. 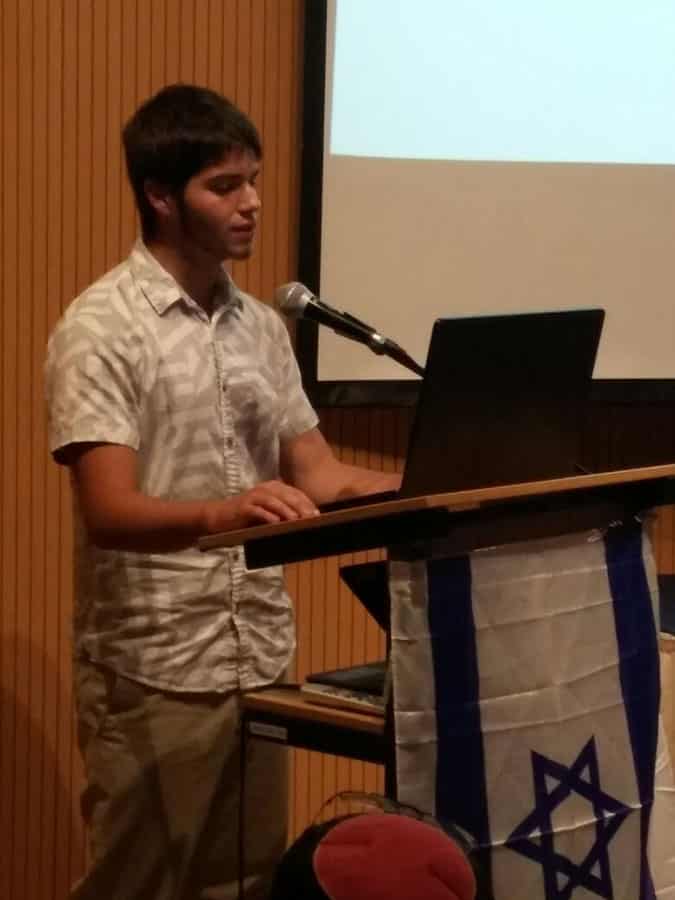