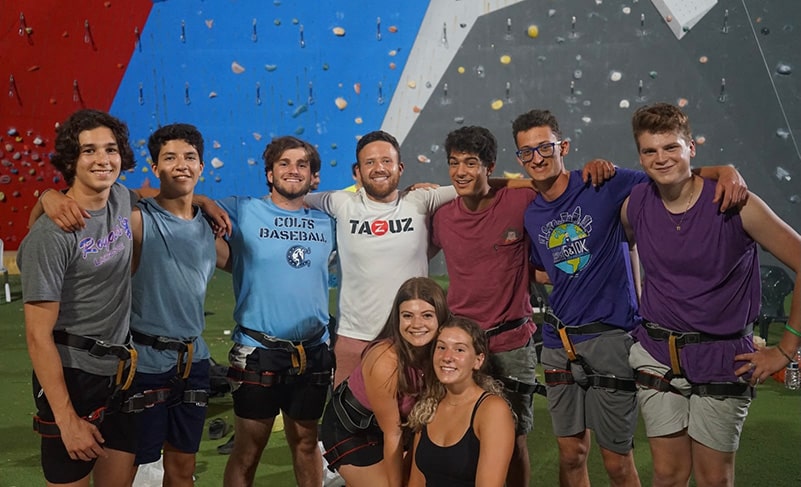 This Sunday, Israel officially announced that we don’t have to wear masks outside anymore! Inside we still need to, but everyone is very happy to be able to walk around and see smiling faces in sunny Tel Aviv.

On Wednesday, for Faces of Israel, we hosted Joe Perlov, who presented a dynamic, interactive map program to our students. His program used an actual floor map, which was created during the program, to explore Jewish history, the history of Israel and the region, and the various sides in the contemporary conflict in the Middle East. We discussed some possibilities for resolving the conflict with him.

On Monday, many students chose to join in a rock climbing activity; here is what Avi Shapiro wrote about it:

“On Monday, thirty other Aardvarkians and myself hopped on a bus and drove to HaYarkon Park, where iCLIMB TLV is located. We arrived and were instantly greeted by an overly energetic Jose, a gentleman who made aliyah seven years ago from Mexico City. We were given a safety briefing, given harnesses, and let loose. We filed into lines behind the self-belay lines and started to climb. It was incredible to see everyone climbing at the same time, and that night was one of the most fun we had in a bit. It was one of the hottest nights of the year, and all of us were drenched in sweat, so I pulled out of my backpack the very best purchase I’ve made in Israel: a water gun. I hooked the water gun to my belt and whenever I would get to the top of a route, I would spray everyone below. After an hour and a half of climbing, we all left and took the bus back together.” 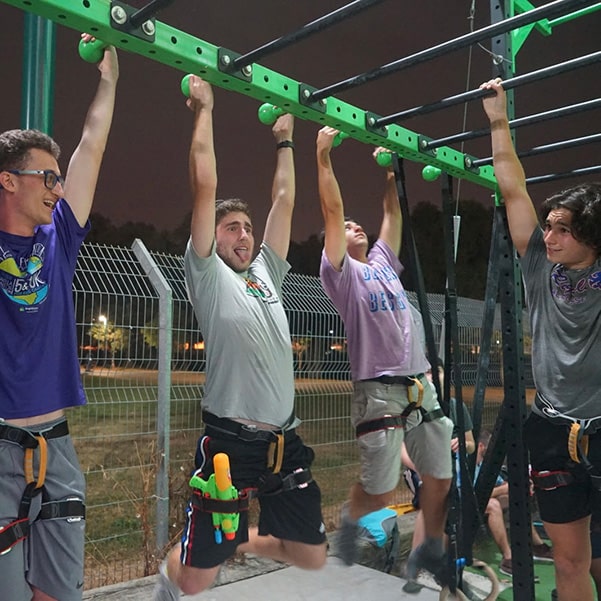 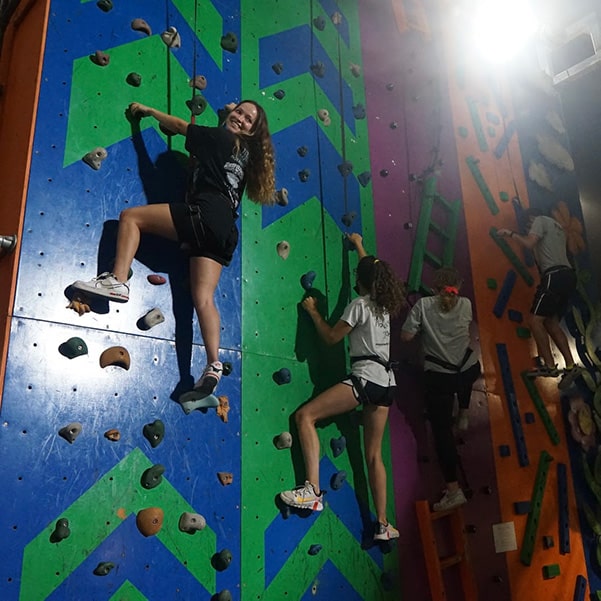 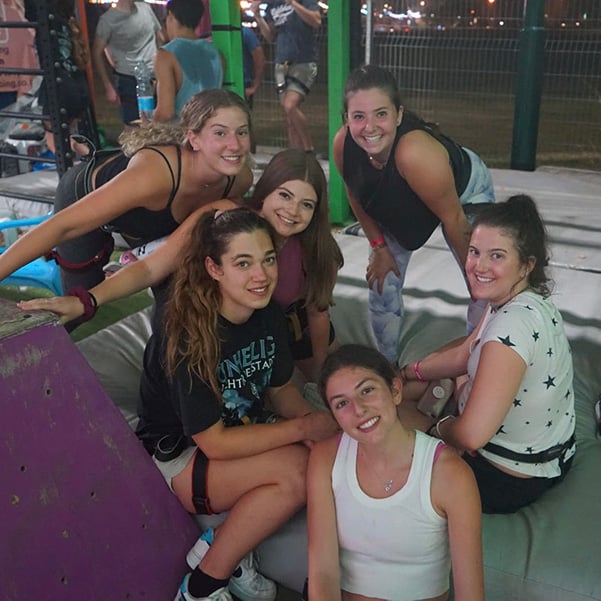 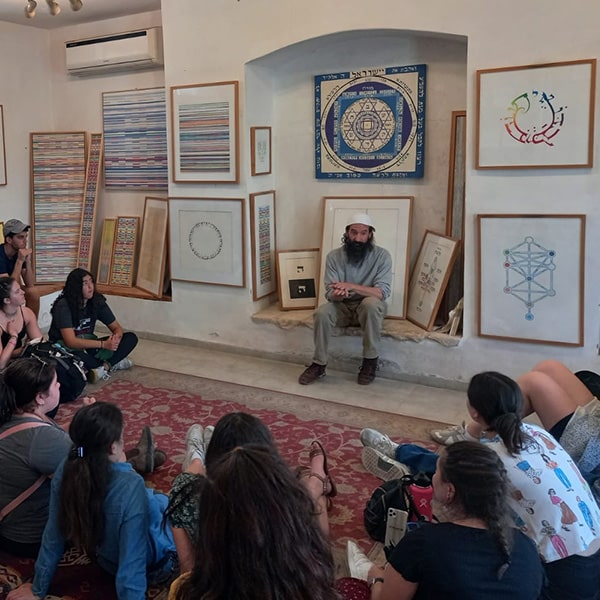 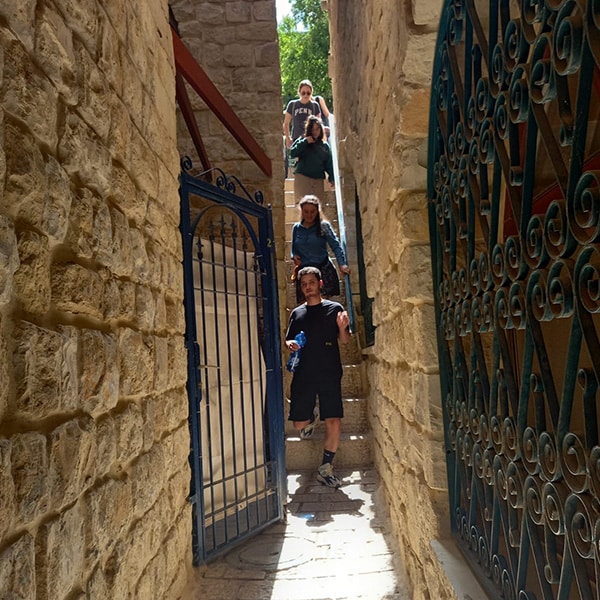 This week in Selah, we stayed local.

But most important was that we welcomed two new members into our community from the new Rothschild community! Welcome to Galith and Kyle!
On Monday, we visited Beit Bialik and learned about the “Agnostic Rabbi” and his “Secular 10 Commandments” as part of his vision of the Jewish cultural revolution that needed to take place in the Land of Israel. On Wednesday, we had a wild and surreal visit to the Yung Yiddish cultural center housed in the New Central Bus Station of Tel Aviv. We met Mendy Kahan, heard his story, were amazed by the world of Yiddishkeit that he is bringing to life in the heart of the bus station. We were even blessed with a surprise visit by musician and actor Avrum Burstein from Shtisel!

In (th)INK! this week, we had many newcomers from the Rothschild community, and we took a suggestion from one of the students and began a discussion about the difficult verses in this week’s Torah portion about homosexuality. We will continue the discussion next week. 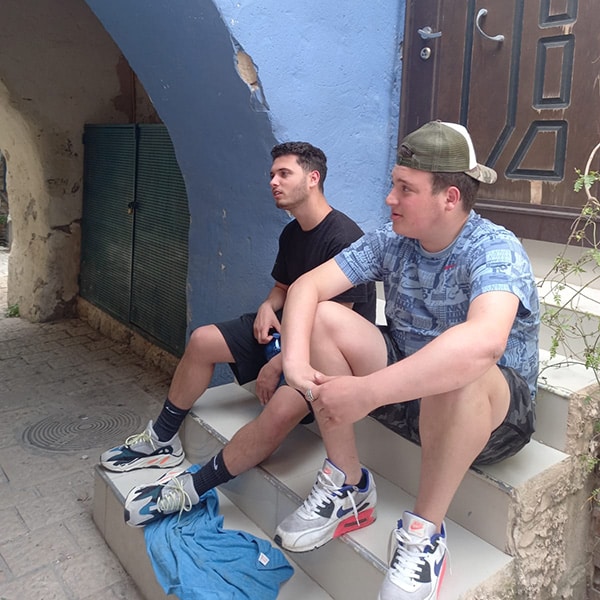 “Going to thINK Tuesday nights after a long day exploring Israel during our tiyul is the perfect way to end the day. Each week we talk about the Torah portion and discuss its deeper meaning and apply it to our daily lives. Last night we delved into a more controversial topic, at least among the ultra-orthodox community, about the LGBTQ+ community from the Torah’s perspective. It was awesome to have a dialogue about it, and although most of us agreed to disagree with the orthodox perspective, it was still interesting to hear the thinking behind it. It was awesome to see that without a doubt, our Aardvark community is one of love and acceptance for all. I can’t wait for next week!”

On Tuesday, we had our first trip of the semester, to Haifa. During the day, the students enjoyed the beautiful view from Louis Promenade and the Baha’i Gardens from above. We learned about the Baha’i Religion and its holy places in Israel. Afterwards we went to The Stella Maris Monastery located on the slopes of Mount Carmel in Haifa, which serves as a center of Carmelite spirituality throughout the world 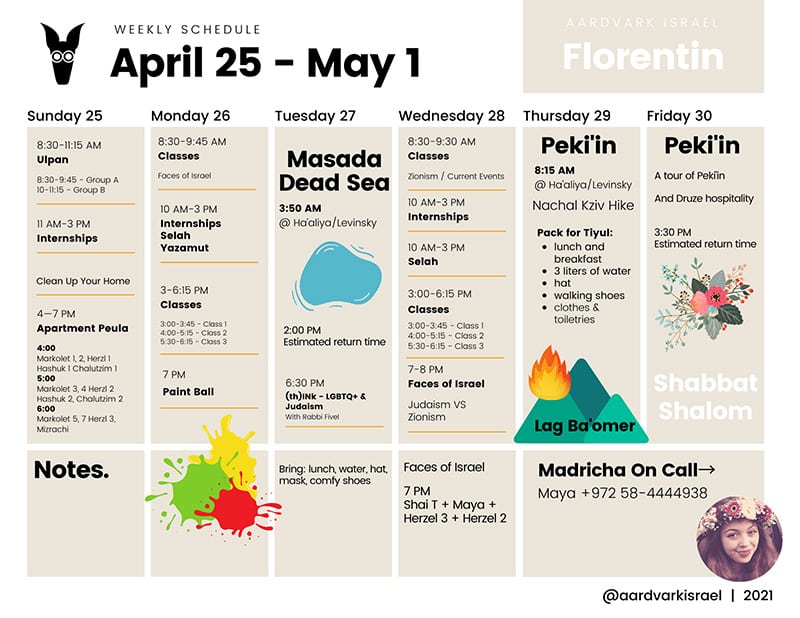 Our Madricha on call this weekend is Maya.