Click to start a new application or login to an existing application.
15 / 100

This week, we were getting in the Purim spirit!
Purim is a Jewish holiday that commemorates the saving of the Jewish people from Haman, who was planning to kill all the Jews. This took place in the ancient Achaemenid Persian Empire. Purim is one of the most widely celebrated festivals in Israel; it is embraced by the entire country, from religious Jews to secular Israelis, from Jerusalem to Tel Aviv, and it has become a time of festivity and celebration far beyond its original religious roots.

For our Tuesday Tiyul, half of the community drove to Akko to explore the history of this beautiful city, while the other went to Haifa and learned about the unique social diveristy in this city of many religions.

Carly Shindler wrote about the Tiyul to Akko:

“Tiyul Tuesdays are back, and I couldn’t be more excited! We went to the port city of Akko and experienced the rich history that characterizes this historic place. While the views were breathtaking and the beach was immaculate, the real beauty lies way beneath the surface. Although I do love to learn the Biblical significance of the places we travel to, what truly intrigues me is the history of Israel that diverts from what we learn in Sunday School. I honestly never wrapped my head around the idea that there have been so many groups of people in this land throughout time. The Romans, Crusaders, Philistines, Ottomans, and so many other groups have made their mark on Israel. We learned that Napoleon Bonaparte tried seven times to lay siege on the city of Akko and never succeeded. The city of Akko was once the Christian capital of the Crusaders and the birth place of the Bahai religion. Akko is an important piece of, not only Israel’s past and present, but the world’s history. It’s hard to wrap my head around the fact that this relatively small city could make such a large impact on life as we know it. I had a great time breathing in the history of Akko:)” 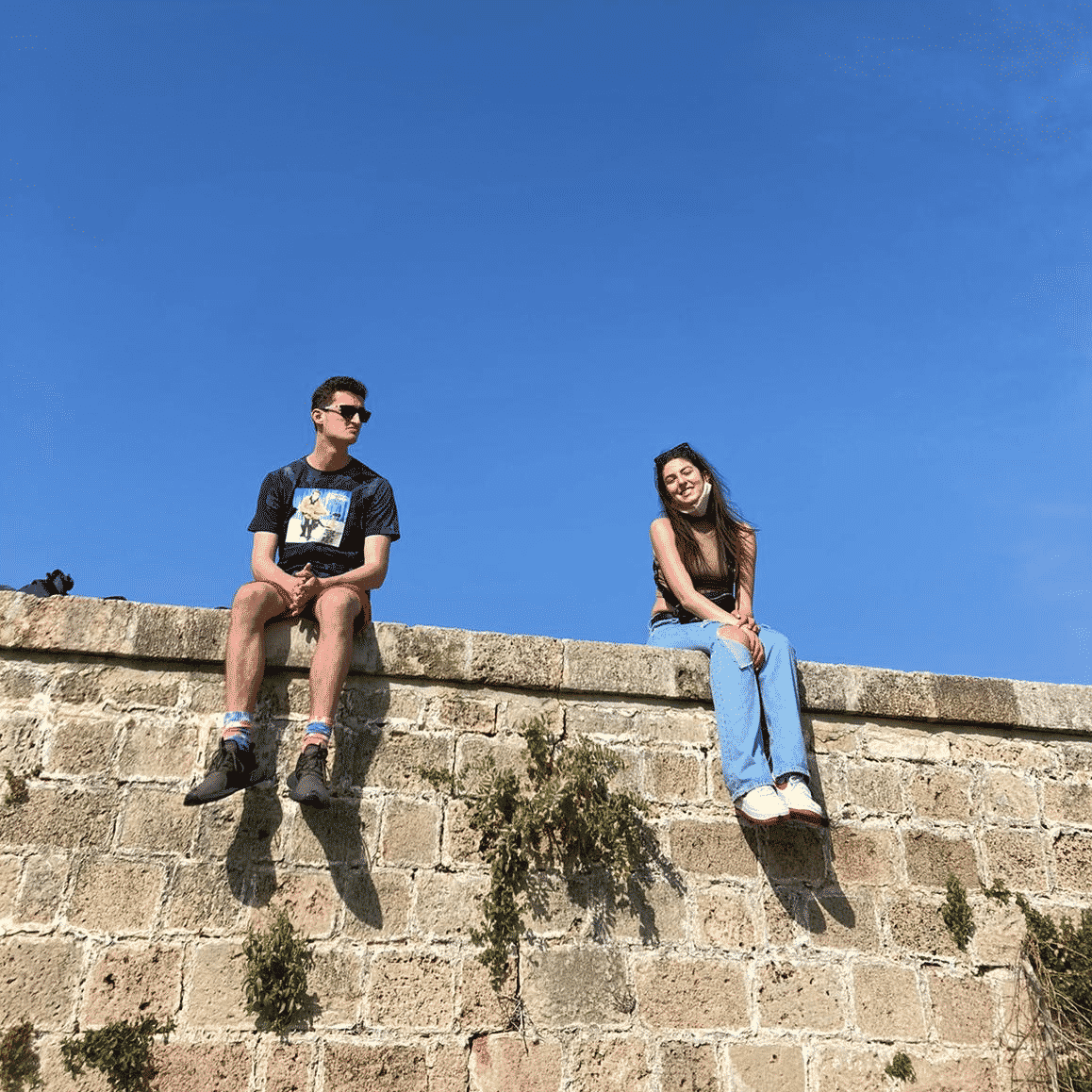 Taking some time to relax in Akko 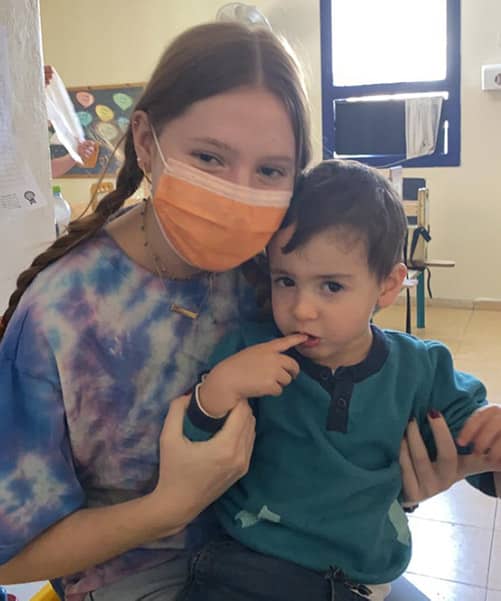 Internship In the Spotlight – Green Course
By Josh Glucksman

“A few days ago, one of Israel’s worst environmental disasters occurred when an oil tanker spilled hundreds of tons of oil along the country’s coast. For all the parents reading this email who are not a 5-minute walk from the Tel Aviv Promenade, the beaches are bad. So bad, in fact, that most of the tar is not visible, but secretly tightening its deadly grip on the Mediterranean.

While the tar might be hidden from eyesight, the country’s mobilization to clean the tar is not. Thousands of volunteers from around the country have shown up to help in the laborious task of cleaning the beaches and waters. I am lucky enough to intern with an environmental organization, Green Course, and have the privilege to help Israel remedy this disaster as soon as possible. While this crisis is just another reminder of the continued negligence of fossil fuel companies, I have been especially reflective of the timing of this one in particular.

In my opinion, this spill happening near Purim might not be a coincidence. The holiday of Purim is so holy because it allows us to see that evil and good cannot exist without each other. It is the one day each year where I can see that the evil of Haman and the good of Mordechai are one and the same; the non-duality of these vehemently opposing forces.
Don’t get me wrong. This does not absolve us of the imperative to fight the good fight. But we can do that the other 364 days of the year. I am currently organizing a volunteering day with my internship and Aardvark where we can soon all clean the beaches and make a difference. I will continue to help Green Course in their mission to elect pro-environmental Knesset members, stop the EastMed pipeline’s devastation, and ban Chevron energy from destroying our country. But, at the end of a very tough week, clearly with so much work to still do, there is something uniquely powerful about Purim that can help us all remember why we are still fighting. Shabbat shalom v’chag sameach!” 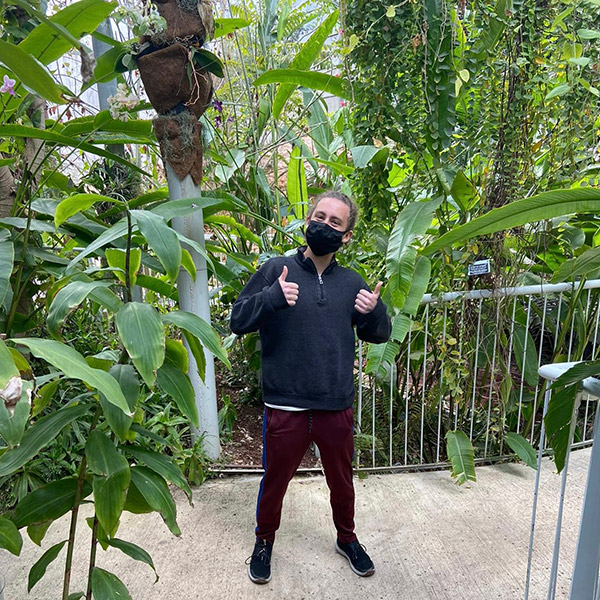 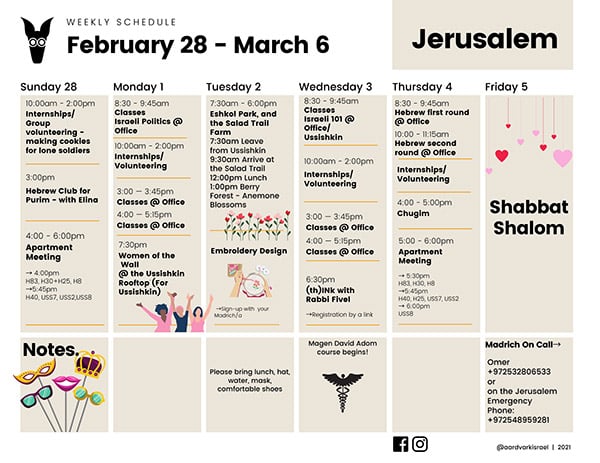 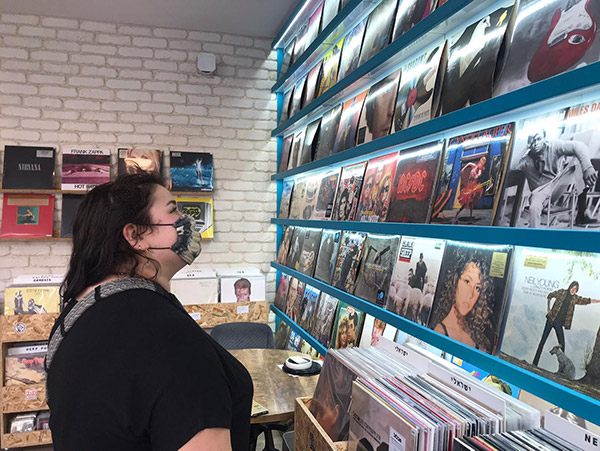 This week in Selah we had two great days. On Monday we visited Bina, the Secular Yeshiva, and learned about their project of reclaiming the Torah and Jewish library and how their investment in social justice is a deep expression of their Jewish identity. Then on Wednesday, we had our first tiyul of the semester; we went hiking on Tel Sokho by the Ella Valley, otherwise known as “Givat Haturmusim” (Lupine Hill). This name comes from the amazing carpet of beautiful purple lupine flowers that bloom for these few weeks in the early springtime. We spoke about both the Biblical history of the place (David fought Goliath just below, the city of Shaarayim, and Sokho in the time of King Hezekiah), and contrasted that with the fleeting and transitory beauty of the blooming flowers. We thought about how that tension could also help us understand and experience some of the depth of Purim as well.

In (th)INK! this week, we explored the weekly parsha about the clothing of the priests in the Tabernacle and enjoyed how these chapters where the priests “dress up” always comes out around Purim. We thought about our own dress and costumes and explored how they conceal or reveal aspects of our inner selves. 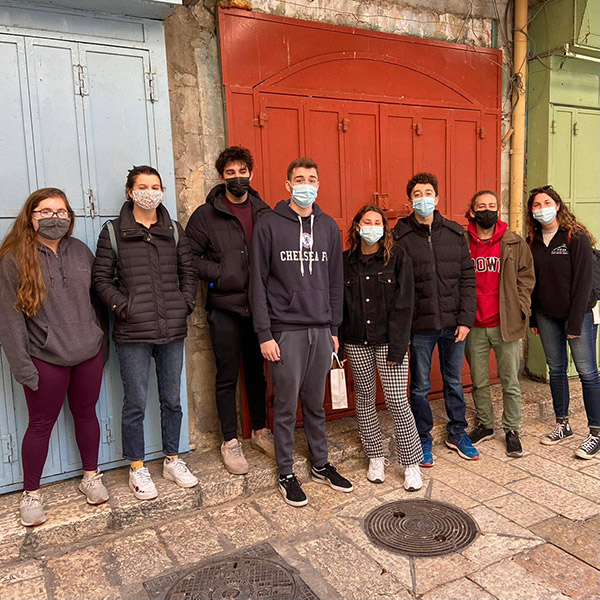 On Wednesday, for Faces Of Israel, we participated in a special activity named Meet the Israelis. The community was split up into groups, with each group meeting a different Israeli speaker, then the speakers rotated between the groups so everyone got to meet them all. A soldier, a settler, an Ethiopian Israeli, an Arab Palestinian, a Haredi Jew, and a left-wing activist. Six of the many stories here in Israel. We had a chance to hear some very different opinions and perspectives, and some that were similar to ours. It was a chance to hear the stories of people we don’t necessarily meet on a daily basis.

“Last night we experienced Faces of Israel. Usually they are very fun, but last night’s was incredible. We had many speakers, each one of them captivating. We had a veteran who participated in Operation Protective Edge, a Palestinian, a Haredi, a daughter of Ethiopian immigrants, a leftist, and a settler. Some of the people I really agreed with and some I did not at all, but each one of them had their own valid opinion and each one could defend his or her opinion. Listening to so many different sides of the Israeli story back to back was probably one of the most memorable experiences since I’ve been in Tel Aviv. When listing to to the Haredi, I remembered why I want to become more religious (maybe not that religious). Listening to the settler made my Zionism even stronger and increased my desire to move here.”

Ethan Pope wrote about the activity:

“First, a Haredi Jew walked in. He told us about his life and it seemed foreign, many of us questioning how someone could live that way. Next, An Ethiopian Jew came in. She told us about her experience here and her parents’ struggles to come to Israel through Operation Moses. Next came the self-proclaimed socialist. His resentful attitude towards Israel and those who work hard to protect him and his rights was infuriating. As I was sitting there, still a bit flustered, the next character entered: a settler. He described where he lived in Efrat, and all of the cities and sites that he could see from his porch. He then talked about how he believes peace is very possible and gave examples of how he coexists with Palestinians daily. Then, a big dude wearing no shoes with long blonde hair walked in. I was thinking, “Who could this guy possibly be?” He was a combat commander who served in Operation Protective Edge. It was good to hear about his sense of pride and responsibility towards Israel. Finally, the Palestinian walked in. He highlighted the struggles for both Palestinians in the West Bank and Israeli Arabs like him. He was very reasonable and said he simply wanted equal rights for his people.
Perspective is one thing that is different for everybody. No one sees life the exact same way as anyone else. By hearing this broad range of perspectives, I believe everyone in the group was able to learn something new.” 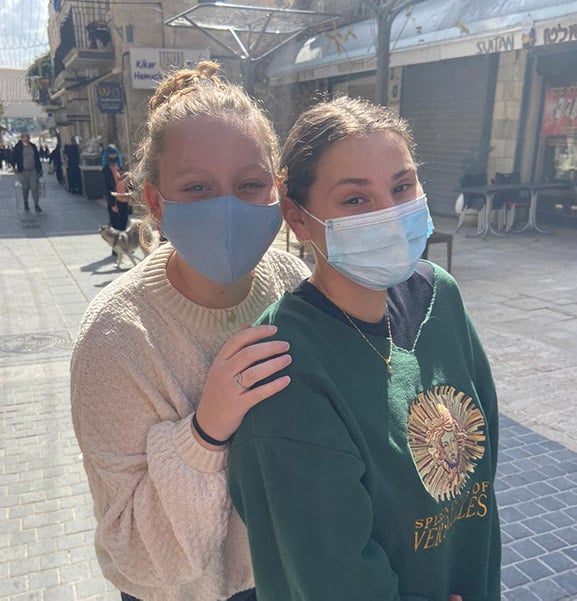 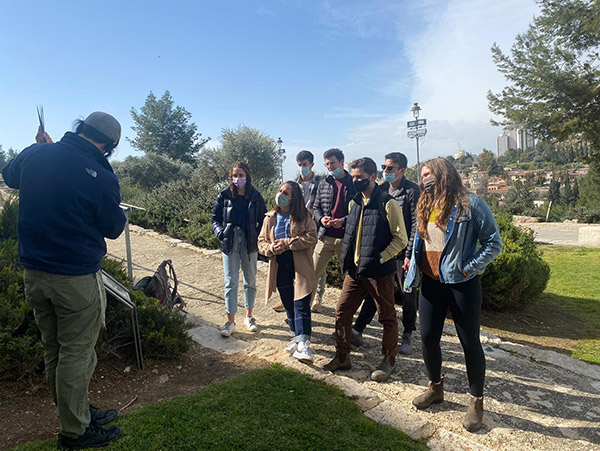 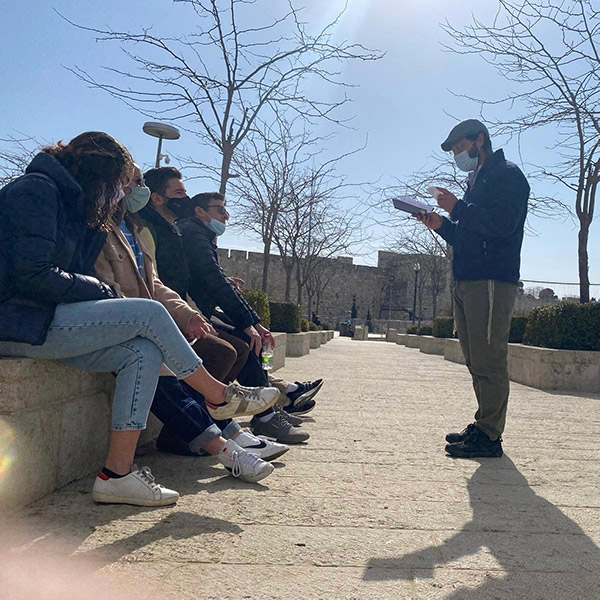 Getting vaccinated with Masa

“This week on the Entrepreneurship Track, we looked into the social side of business by venturing to Dizengoff mall for a tour. To the naked eye, this mall might look slightly wonky, with curving corridors and street signs. But for the most part on the surface, it’s a normal shopping center, holding tons of well-known stores and yummy foods.
However, our Yazamut group dove much further in, learning how the original founders of the mall creatively brought in an environmental emphasis to their startup. We went down a few flights of stairs into the garage, where trucks filled with cardboard and leftover materials were heading off to be recycled. (Just don’t remind our counselor Didi about the bats in the ceiling!) On the roof we sat feet away from a live beehive while they buzzed around, happily in their safe abode. Lastly, we walked through a few greenhouses, where plants were flourishing and expelling oxygen into the atmosphere to offset the C02 emissions coming from the mall.
This day reminded us that business is not all about income, but the community of people surrounding the company. To end the day, we ate sushi at the office! We all can’t wait to see what next week has in store.” 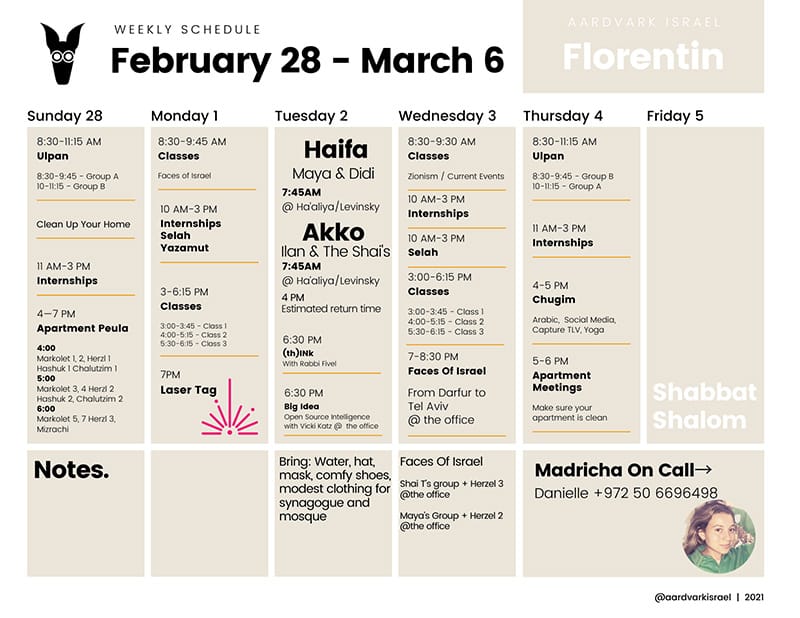 Our Madricha on call this weekend is Shayun.
Shabbat Shalom,
Etai