The second week was great! We began our regular schedule and it seems that the students are beginning to get used to the idea of being an Aardvarkian ;-).

The week was packed with volunteering, internships, ulpan lessons and add-ons. Here are some highlights from the past week:

On Sunday we began the day with volunteering and internship workshops. In the workshops, the students discussed a variety of situations and ran through simulations to do with their placements.

After the workshop, the students that signed up for the add-ons had their first activity:
The Entrepreneurship group had an amazing session about Israel as a start-up nation and we presented them with the curriculum for the next meetings. I would like to add that besides Sahar, our Madricha who is in charge on this add-on, we have a mentor called Robert Frohilinger who is known, familiar with the field and will be with us almost every week.

The Sea Sports group went to Gaash to enjoy their first extreme activity! They went paragliding from cliff to cliff. They had a great time and it was lovely to see their smiling faces when they arrived back to the office.

At the end of the day, we had a cleaning session followed by apartment meetings with the counselors.
After a quick check on the apartments, the Madrichim ran an expectation activity involving dynamic methods to help the students adjust to their new way of living. In Pirkei Avot (Chapters of the Fathers), there is a verse that says, “Know where you came from and know where you are going to.” The students come from many different places. Every one of them has different expectations regarding the program and about living in Israel. We feel that every one of them needs to open his or her mind and to start creating their own personal path to success. In order to do so, they need to set goals and objectives, they began this process in their apartment meetings, and they are going to continue next week in the community talk on Wednesday.

Monday was our first day of volunteering and internships. Most of the students went to their interviews and first meetings with their mentors, they went to startup companies’ kinder gardens, galleries, local businesses, schools and more. In addition, the group volunteered at a factory run by blind people in Ramat Gan. When the students arrived, they attended a lecture on blindness and afterwards they helped with the work in the factory alongside the blind people that work there.

Later that day we had our first Ulpan seminar lesson. Learning the local language is a priority of the program and that is why we had a full week of Hebrew study for three hours a day. The teacher enjoyed meeting the students and starting to get to know them. It seems that this semester we are lucky enough to have a seriously studious group, the lessons were a success and the process of Hebrew learning has begun on the right foot. In the evening, the students went paintballing. They took a bus with the Madrichim to Holon and enjoyed the energetic outdoors activity.

On Tuesday, we went on a tour of one of Tel Aviv’s oldest districts, Neve Tzedek. Neve Tzedek was the first Jewish neighborhood outside the old port city of Jaffa, built as a suburb. Its oriental architectural style, combined with quaint, narrow streets filled with boutiques, makes Neve Tzedek, which means Oasis of Justice, quite literally an oasis in the modern city. We are living in a beautiful and interesting city surrounded by stories and history. During the course of the semester the students will go on tours all across Tel Aviv and they will get to know the city inside out.

Later that day, after Ulpan, we had our first Parsha and Pizza session with Rabbi Marc. Each week the students are invited to come and study the weekly Torah portion, eat some pizza and participate in discussions about Judaism and Israel. This week’s portion is called Ki Tavo and is all about the Jewish people preparing to enter the Land of Israel after forty years wandering in the desert. The people were commanded to bring an offering of the first fruits to the Temple. We watched a time-lapse video about fruit growing and did a mindfulness exercise while eating a piece of fruit and savoring its sweetness. Rabbi Marc explained that the significance of offering the first fruits to God is a buffer against human arrogance. Sometimes we feel so proud of our achievements that we forget to recognize God’s role in everything. As one of the first commandments given to the Jewish people after entry to the land, perhaps the fear was they would take Israel for granted and think the land was bountiful only because of human hands and labor. Who knows, perhaps this is a lesson that can also be applied to the modern State of Israel?

On Wednesday morning the students went to their internships and volunteering placements. The group volunteering activity was at Tzahar Bahaley Chaim, an animal shelter in Tel Aviv. Despite the emotional challenge, the students were highly motivated. After a brief explanation about the shelter and the work it performs the students got straight to work. Some of them took out dogs for a walk around the shelter while others took care of the cats. It was an intense and powerful experience for some of the students and when it was time to leave they asked to stay on as they felt that they needed to contribute more.
We also had the add-ons activities on Wednesday morning. The Entrepreneurship group went to an escape room. The activity was designed to try to develop creative thinking in order to solve problems. The group had to work together to solve puzzles and work through a number of obstacles. After managing to escape the room, they had a discussion and gave feedback regarding everything that they went through.

The sea sports add-on had their first surfing lesson at the Dolphinarium beach. It was a stunning experience and everyone really enjoyed it!

The day continued with Ulpan lessons and a short apartment meeting together with a checkup on the apartments, it seemed that the students are starting to get used to the program. Friendships are forming, our students are filling internships and volunteering positions and the atmosphere here in Aardvark Israel is full of good vibes.

On Wednesday evening, just before the end of the week, we gathered at the moadon for our evening activity, a scavenger hunt. The Madrichim designed the activity to be both Zionistic and challenging; they called it Herzel Amar! (Herzel said!). The students split into teams based upon their apartments and were given a page of missions that they needed to complete within an hour and a half.

On Thursday everyone went to their volunteering placements and internships. The group volunteering activity was in Bat Yam at the organization Latet . The volunteers put together food packages for people in need for the upcoming holidays. It was good experience and afterwards the students felt that they had performed a significant good deed!

Later that day, just before Ulpan began, we had a short community meeting about weekend procedures. I explained to the students that every weekend one of the counselors will be in the area and available for any urgent matters that arise during the weekend.

It was a great week and it so good watch the students begin to connect and build relationships together.
Have a great week,
Eyal 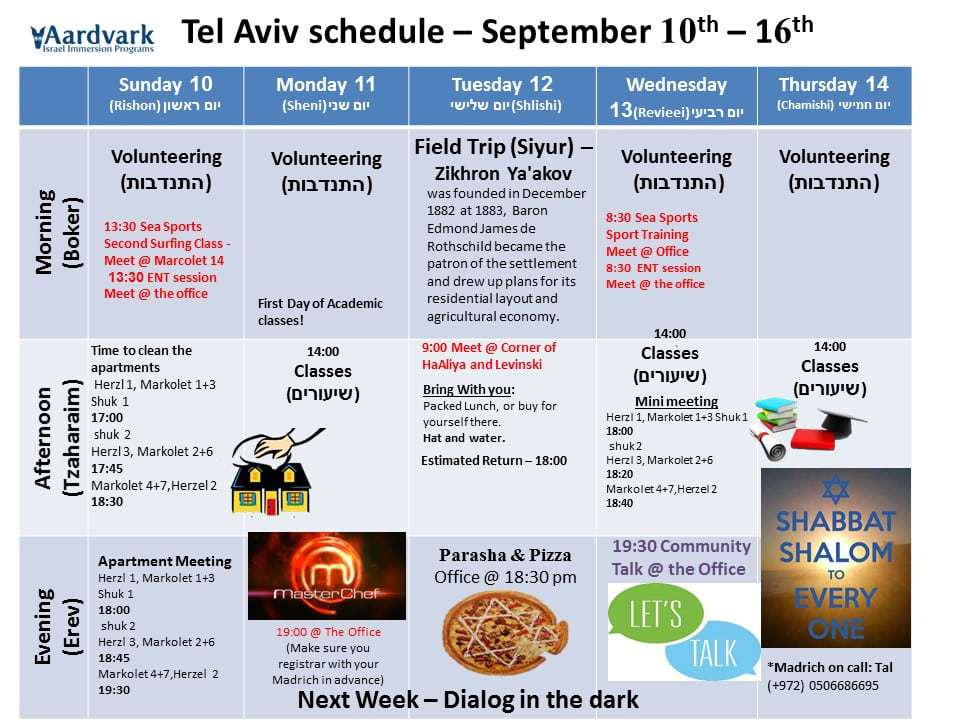