How Jerusalem Got Its Own Skate Park 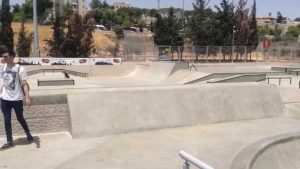 There are probably many things that come to mind when you think of Israel and Jerusalem, such as the Old City, the market, hummus or just the general Middle East vibe. However, to the surprise of many Jerusalem is also home to a very active skater community, so active that they recently managed to get their very own skate park opened in the heart of the city.

The campaign to build a skate park really got underway back in 2010 when roughly 300 local skaters came together for a rally outside of the city hall. The rally was the brainchild of a group of nine skateboarders who got together to begin campaigning for a skate park in the capital city. The rally took place on the annual skateboarders’ day, June 21st, and people came from across the country to help with the campaign.

Of course the rally was organised with the help of Facebook and the page quickly attracted over 1,000 supporters which in 2010 was no small feat. They accompanied the online campaign by handing out flyers around the city to try and keep the idea of a skate park fresh in the mind of Jerusalemites.

Nir Barkat, the mayor of Jerusalem, visited the school of one of the skateboarders campaigning for the park in 2011. The skater in question, Noam Revkin-Fenton, used the opportunity to tell the mayor about the park project and all of his ideas. Barkat then saw the sense behind the project, saw how it could benefit the city and became a huge supporter of the cause.

The park officially opened in May 2014 and since then it has drawn hundreds of people. One of the driving forces behind the campaign is also one of the top skaters in Israel and he organises private lessons and special camps during school vacations in order to ensure that the next generation makes use of the fantastic facility and introduce newcomers to the fun world of skateboarding.

While the skate park Facebook page is nowhere near as active as it used to be (it is less essential now that the park has been built), there are still numerous people that use it to share photos and videos from the park and to build up the community. You can take a look at it here.

If you enjoy skateboarding or have always wanted to try it out then be sure to visit the park during your gap year in Israel. The park is busy on a daily basis and you will find a range of the young and old from near and far having a good time. You can take a look at the park’s Facebook page to check for any special events or even message them to arrange some lessons if you’re not sure where to begin. It’s a great way to meet some locals, learn a new fun skill and experience a different side of Jerusalem culture while living in the holy city.