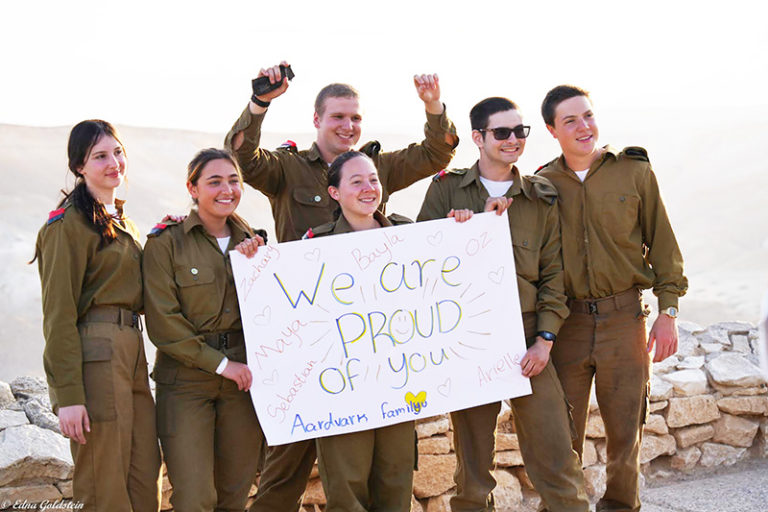 December was the last month of the fall semester and trust us, a lot happened in just one month. We said goodbye to some of our students and ‘See you soon’ to most of our students, who went on their winter break and will be back for the spring semester. Curious to read about some of the special, exciting adventures our students went through? We’ve got you covered! Scroll down to read some highlights ⬇️

Among our students’ weekly trips in December was a visit to Yad Vashem, the national Holocaust museum, and to Har Herzl, the national and military cemetery, where past presidents and Herzl himself are buried. The students learned about the evolution of antisemitism in Europe, the attempt to destroy the entire Jewish European community, and the horrifying events that led to the murder of six million Jews. They learned about Jewish uprisings, the ones that did not give up until the very end, fighting for their freedom, life, and dignity. The museum tour concluded with events of the post-Holocaust years, including the massive Aliyah to Israel, which helped them realize that Jews around the world have only one land they can call home – the land of Israel. They continued to Har Herzl and learned about some of the people who sacrificed their lives for the State of Israel and its independence, and about the visionary, Theodor (Benjamin Ze’ev) Herzl, one of the most prominent, influential figures in modern times.

Levontin community did something really different and special this month on one of their Tuesday trips. They visited Beit Halochem (Fighters’ home), which was built in 1974 after the Yom Kippur War. The organization initiates and supports research on various subjects, such as sports for the disabled and problems related to spinal injury and brain damage. Its veterans taught our students about resilience while they played basketball with them, proving nothing is impossible.

Josh Hanison, a student from the community, who helped organize the trip to Beit Halochem, shares a special connection with this place. “A charity I have been closely associated with back home in the UK is Beit Halochem UK of whom the CEO is a very close family friend, Spencer Gelding. Beit Halochem is an amazing charity dedicated to exceptional rehabilitative services and lifelong care for our brave Israeli veterans and their families. I was so thrilled after speaking to Spencer and discussing the charity with Aardvark Israel that we were able to have a tour of the centre and learn about the most uplifting and incredible examples of bravery and how Beit Halochem has helped countless veterans through their darkest moments and inspire them to new challenges, including representing Israel at the Paralympic Games.

I have been living in Tel Aviv for 4 months and have really loved my time here it has been one of the best experiences of my life. Having visited Israel with my school 5 years ago I felt a connection that I wanted to explore further and participating in the Aardvark Israel programme has enabled me to achieve this. I have made incredible friendships with Jewish people from around the world and have integrated into Israeli society whilst exploring the country and learning to speak Hebrew.

I can’t believe how quickly the past four months have passed – I will miss the beach, Israeli food, and new lifelong friends when I head back home for the winter break, but I am excited to be returning in January 2023 in Jerusalem.”

CLICK HERE TO SEE ALL PHOTOS!
From Beit Halochem all the way to Dubai! We just got back from our third international trip for this semester! More than thirty students boarded the plane early one Sunday morning, on their way to the UAE, a country that until recently did not have diplomatic relations with the State of Israel, and only lately, following the Abraham Accords, was open to Israelis. The trip’s theme was tolerance, and it included tours of Dubai, and Abu Dhabi, trying the local cuisine, and visiting the Crossroads Museum, whose mission is to emphasize the importance of universal values, such as tolerance and respect. Our students also visited the Holocaust museum, and of course – places like the Burj Khalifa, the tallest building in the world. They met representatives of the Jewish community in Dubai and Israel’s ambassador to the UAE, Amir Hayek. They continued to Abu Dhabi, had some free time at the local mall, which is known to be the most impressive and luxurious in the world, went dune bashing and sand-surfing, had a henna paint ceremony, and watched the sunset whilst on a desert safari.

Back from Dubai to our special interest programs’ graduation ceremonies and closing events. Our MADA participants finished their training and got an official certificate, after intense training and learning life-saving skills. The students used their new skills as they volunteered on real ambulances, responding to calls and saving lives.

Marva students Sebastian, Bayla, Zachary, Ariel, Oz, and Maya finished their rigorous, 8-week military training. Our students went through two meaningful ceremonies with their fellows and commanders, just like every real Israeli soldier goes in his or her military service: a Diskit (metal dog tag) ceremony in the Kotel and a graduation ceremony in Sde Boker. Some of them even got their commanders’ special pins, something reserved only for outstanding soldiers. Well done, everyone!

Our Sea Sports add-on students finished their program with a three-day trip to Eilat, where they went paragliding, scuba diving, and snorkeling! Wow, what a fantastic way to end a semester.

It wouldn’t be December without Hanukkah! Our students celebrated this magical holiday with community candle lighting, sufganiyot (doughnuts) decoration, latkes, and a Hannukiot tour of the Nachlaot neighborhood in Jerusalem.

And for more exciting news from Jerusalem – a couple of weeks ago, Anna Sperans celebrated her Bat Mitzvah with her friends and family who came all the way from the US to be with her for this special moment. Anna chose to do an alternative ceremony, led by one of our program’s teachers, Avi Rose, ending at Cafe Liba, where Anna interned this past semester. Mazal Tov, Anna!

In the very last week of the semester, our students were busy with closing activities, led by the madrichim, and last goodbyes before they take off for winter break.

They finished their fall semester internships and volunteering, hosted community Oscar nights, participated in self and group reflection, and even Karaoke! They received gifts from their madrichim and shared their thoughts and feelings about their own personal journey in Israel and with Judaism.

CLICK HERE TO SEE ALL PHOTOS!
Time to say goodbye for now, everybody! Next time we will meet, we will be telling all about our Spring semester, which is just about to start! We leave you with a few pieces of art by our student, Joel Nessim. His work was showcased at the ‘Tiny Tiny Gallery’ in Tel Aviv, as part of his internship with the artist Murielle Cohen. See you next month, The Aardvark Israel Staff
Tagged aardvarkaardvarkisraelgap yeargap year in israelGap Year in JerusalemIsraeljerusalemtel-avivWeekly Updates