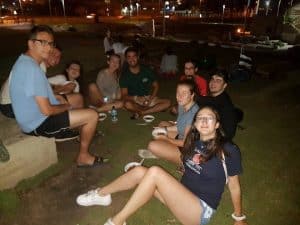 Summer is slowly but surely arriving. Each day the sun sets a few minutes later. The madrichim are starting to work with each student to summarize their experiences from the past few months and trying to plan how they can make the most of the last few weeks of their time here on Aardvark. Furthermore, the madrichim will (or already will have) soon give you a call to keep you involved your child’s experiences over their final few weeks. If you have any feedback for us, we would love to hear it in order for us to improve (so your younger children will have an opportunity to experience an even better program).

The last few days here in Tel Aviv were hot and humid. Many students used their free time to go and chill on the beautiful Tel Aviv beaches and will probably use the weekend to do the same! (They were instructed to use sunscreen!).

On Sunday evening, after a fabulous inspection, Elad took his apartments to a place called “Cookiz”. It is a kind of “make your own cookies” place (it is a thing here in Tel Aviv – highly recommended), in order to reflect and set up goals for the last month of the semester. From what Elad told me, the students have many plans.

On Tuesday, we went to The Palmach Museum. The Palmach, acronym for Plugot Maḥatz (Or “Strike Force” in English) was the elite fighting force of the Haganah, the underground army of the Yishuv (Jewish community) during the period of the British Mandate for Palestine. The Palmach was established on 15 May 1941. By the outbreak of the 1948 Arab–Israeli War, it consisted of over 2,000 men and women in three fighting brigades as well as auxiliary aerial, naval and intelligence units. With the creation of Israel’s army, the three Palmach Brigades were disbanded. This and other political reasons led to many of the senior Palmach officers resigning in 1950.

The Palmach contributed significantly to Israeli culture and ethos, well beyond its military contribution. Its members formed the backbone of the Israel Defense Forces high command for many years, and were prominent in Israeli politics, literature and culture.

Later on that day, the group went to Midreshet “Bina”. It is a place where the religious and secular come together for Jewish studies. The group joined a class of Israeli gap year students, Natali Deller wrote about the experience:

“On Tuesday evening we participated in an interesting class at Bina on the topic of the rabbinical law regarding idolatry. The class looked at the punishment for worshipping idols and how it should be applied in terms of seeing idols in secular society. The teacher wanted to introduce study of the Talmud and used Idolatry as a way of doing this. It was cool to hear the perspectives of other students outside of Aardvark and engage in their discussion at the end.”

On Wednesday evening, the students met to do Poyke Cooking on the beach. A poyke is a large cast-iron pot on legs that you put directly into the fire. However, it is not just a way of cooking. In Israel it is an Event. Groups of friends will get together to “do poyke” on special occasions and while the food cooks everyone hangs out around the fire. Each semester, we have a poyke night for the students on Aardvark. The madrichim taught the students how to do a proper poyke. Everyone was very helpful and worked together to make the best possible poyke. Jake Walter and Asher Goldberg were really into helping to make the poyke and the madrichim let them lead the firing and cooking art of the “Israeli Poyke”.

On Thursday, the students went on a trip to Shuk Levinski as part of their Hebrew class – Alon Mos wrote a short summary of the amazing tour they had:

“The absolutely amazing students took to the streets to test out their Hebrew in the Levinsky Shuk. We were tasked with finding out the prices of nuts, vegetables and the number of delicious Persian restaurants. It was truly inspirational to see my friends use Hebrew that they have learnt through Aardvark’s Ulpan classes. It was an excellent activity that combined the use of language and navigation and ultimately created an enjoyable afternoon. Personally, it was a great way to see my improvement in Hebrew in action!”

On the Social Psychology course, the students are learning that there are different types of love. The two most common are compassionate and passionate love. Compassionate love consists of feelings of intimacy and affection that we have for someone. The other is passionate love that involves an intense longing for another person characterized by the experience of physiological arousal, the feeling of shortness of breath and thumping of the heart, and the feeling of butterflies in the stomach. Moreover, the students learned that attraction validates our attitudes about ourselves and the person whom we are attracted to. Thus, the more similar a person’s attitude are to our own the more rewarded we feel.

That will be all for now,
Until next time,
Shabbat Shalom,