It was a short week but still packed full of highlights:

This week, in honor of the New Year, we helped the students with some self-reflection. At this time of the year, during the holidays, we asked the students to reflect upon their time here in Israel and their experience so far at Aardvark, on which personal qualities they want to work on during the year away from home and in a new environment. We asked them to think about how they can make their experience this year a positive. What might they want to change in themselves in order to become better people? Of course, none of these questions have easy answers, but at least we began the process.

Part of this self-reflection began when we took the students to Tashlich. Tashlich is a ritual that many Jews observe on Rosh Hashanah. “Tashlich” means “casting off” in Hebrew and involves symbolically casting off the sins of the previous year by tossing pieces of bread or another food into a body of flowing water. On Monday night, we went to a natural spring close to Jerusalem called ‘Ein Sarig’. There, we set out blankets for the students to sit on and we had a little study session about Tashlich covering why we do it and its origins. Then, we got up as a group, went over to the spring, recited the Tashlich prayer and threw all of our sins away. Afterwards the students wrote down what they wanted to “throw away” from the past year and what they want to improve in the upcoming year. The evening was lovely and Gabe Strauss said, “This might have been the funnest thing I’ve done yet!”

The students really enjoyed it and found it very meaningful!

For our weekly siyur we went on a Graffiti Tour of the neighborhood of Nahlaot in Jerusalem and learned all about the city’s fabulous street art. Through the art, we were able to understand more about the country’s political situation and the different opinions people have in this diverse city. Jason Levin said, “It helped me feel more connected to the people of the city.” We also got to know one of the city’s most interesting neighborhoods – Nahlaot.

To conclude the day, our madrichim prepared an amazing Rosh Hashanah Seder with all the traditional foods. On one of the walls, on honeycombed shaped paper, we all wrote our goals for the year and the things we are hoping to accomplish. We dressed up in our best clothes and took many photos while singing along to popular Israeli songs. Each apartment made a dish and we enjoyed a potluck dinner, it was a fun night before we all went our separate ways for Rosh Hashanah. Mikey Szabo said, “Even though I’ve only known everyone for 3 short weeks, everyone already feels like my family.”

This week on Selah: First, the group had to recover from their incredible Shabbaton in the holy city of Tsfat. As this was our first Shabbaton, the students did not yet know what to expect. It began with free time for the students to wander through the Artist Colony before beginning their program at Ascent – a hostel that specializes in opening people up to the mystical traditions of the Kabbala and Hassidism. After the Kabbalat Shabbat prayers, the students were divided into groups and went to different Hassidic families for dinner. Although their experiences were all different, what they had in common was the opportunity to meet people and have conversations that they would never normally be able to have. Shabbat day saw the group gather for Kiddush and some games before lunch and a walk to a secret cave where the group sat in the darkness and sang for ages. The cave’s acoustics make any group sound like a beautiful choir and a lot of people were moved to tears. Tsfat can have that effect on people – the views, the height of the city, the blue paint on every door and window and the many pictures of famous Rabbis on every street corner provoke many people into thinking and feeling differently. Even the graffiti there is mystical.

On Monday, the group got ready for Rosh Hashana with a Shofar Workshop. The group learnt about the significance of the Shofar and the laws that make a Shofar kosher. They then spent over an hour sanding, filing, sawing, cutting and drilling to make their own working Shofar. Yaeli and Efi even managed to blow it right! The group ended with a Reflection session with Rabbi Marc where they were able to decide their Jewish priorities for the year ahead. Everyone chose an area of learning to study, a Jewish value to work on and a Jewish practice to commit to following. Rabbi Marc will be sitting one-on-one with the Selah students over the next few weeks to talk through these aims.

In Academics this week:

This week in Contemporary Israeli Politics class, the students were challenged to think about what makes something politically significant. Everyone was given six contemporary events that have affected Israel’s domestic or foreign policy and then had to rank them in order of significance. The events were the Iranian nuclear deal, the Israeli president found guilty of rape, the budget deficit, the IDF naval assault on humanitarian mission, a new university being built in the West Bank and the opening of a special unit for the Ultra-Orthodox in the army. Rabbi Marc then helped the group to process their answers and analyze their thought processes. The class was then able to look at the different criteria that can be used to ‘read’ a political event – the number of people affected, ideology, world opinion, alliances, economics, cultural impact and more. Later on, the group was given an overview of the print and digital media in Israel and encouraged to read more about current affairs. As a way of putting this into practice, the group was asked to compare the way five different news outlets reported on recent Haredi demonstrations against military conscription.

On this occasion, I would like to wish everyone a Happy New Year and a happy holiday.
Natali 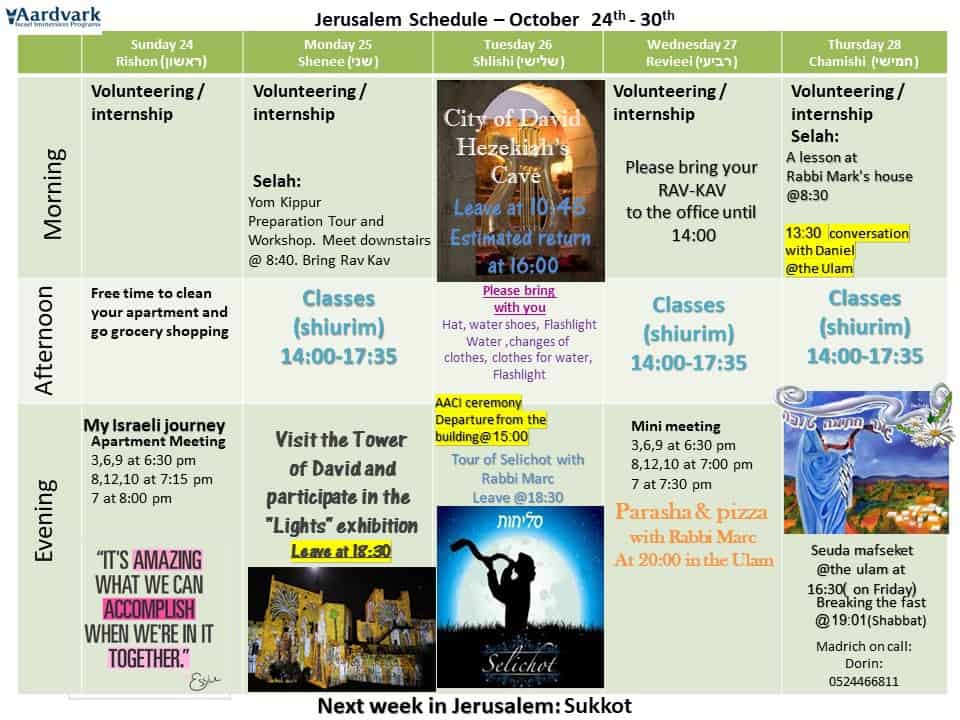