This week was very special, as our students observed Yom Kippur in Israel. The silent streets, with almost no cars on the roads, and the feeling of serenity in the air is something very hard to describe. Many of our students fasted and went to synagogue for Yom Kippur on Wednesday, followed by building a Sukkah on Thursday. They did plenty of stuff before and after, too! Scroll down to read all about it >>

Our Selah (Jewish Enrichment) Track students went to the Arba Minim (Four Species) market and got their Lulav, Hadasim, Aravot and Etrog. Later, they went up to the roof and built their very own Sukkah, including decorations!

“Soon the Jewish people will conclude the annual cycle of reading the Torah and start it once again from the beginning with the book of Genesis. Immediately, we will read of Noah and the flood. During that time, the people mistreated one another, committing acts of robbery and adultery. As a result, G-d destroyed the world, saving only Noah and his family. Subsequently, we will read the episode of the Tower of Babel wherein the people gathered together and decided as a unit to build a tower in order to wage war with G-d. Obviously, G-d did not look kindly on this behavior. Thus, He punished them by confounding their languages and dispersing them across the globe.

Why is it that in the days of Noah G-d destroyed the entire world for their indecent behavior, and yet, with the Tower of Babel, when the people deliberately rebelled against G-d Himself, He merely confused their languages and split them up? The clear answer that comes out of this is that G-d cares more about how we treat each other than about how we treat Him. While the act of waging war with G-d was wrong, at least they did so together as one unit. Yom Kippur is an intense day emotionally. The Jewish people seek atonement with their Creator. Thus, as we approach the holy day, let us recall that the greatest thing we can do with regard to strengthening our relationship with our Creator, is to strengthen our relationships with one another.”

As part of our collaboration with pre-military colleges in Israel, called mechinot, our Florentin students met for the first time with their partner mechina in order to strengthen the connection between them and young Israelis their age. The mechina, ‘Menasharim Kalu,’ which means ‘lighter than eagles,’ is located in Kibbutz Ma’agan Michael, in the Hof HaCarmel region. Our students met them for an opening session and had a fun acrobalance session together, which they seemed to enjoy very much!

Earlier this week, as part of Faces of Israel, the students met Itzik from the Haredi community, who talked to them about his personal life and what it’s like to be a Haredi in Israel; his thoughts about Shiduchim (matchmaking), marriage in the Haredi community, going to Yeshiva, not enlisting to the IDF, and how he celebrates Yom Kippur. 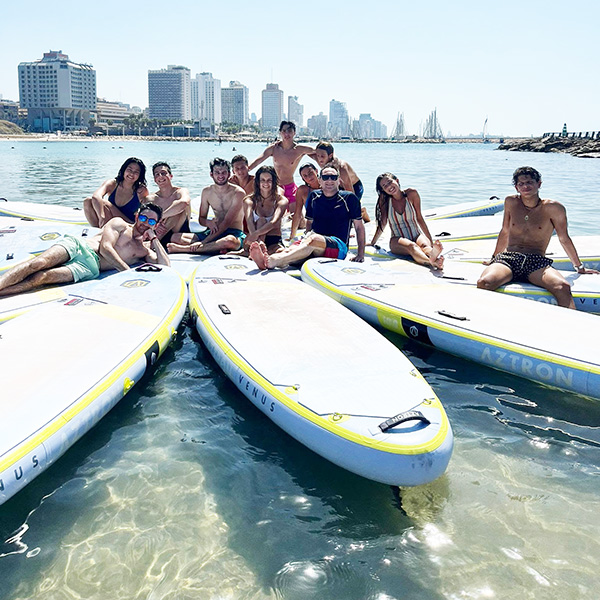 Last but definitely not least — our Sea Sport group was having some fun in the sun in a SUP yoga session at Hilton Beach!

Please note that the next newsletter will be sent on Sunday the 16th, instead of Thursday the 13th. Try not to miss us too much 😉 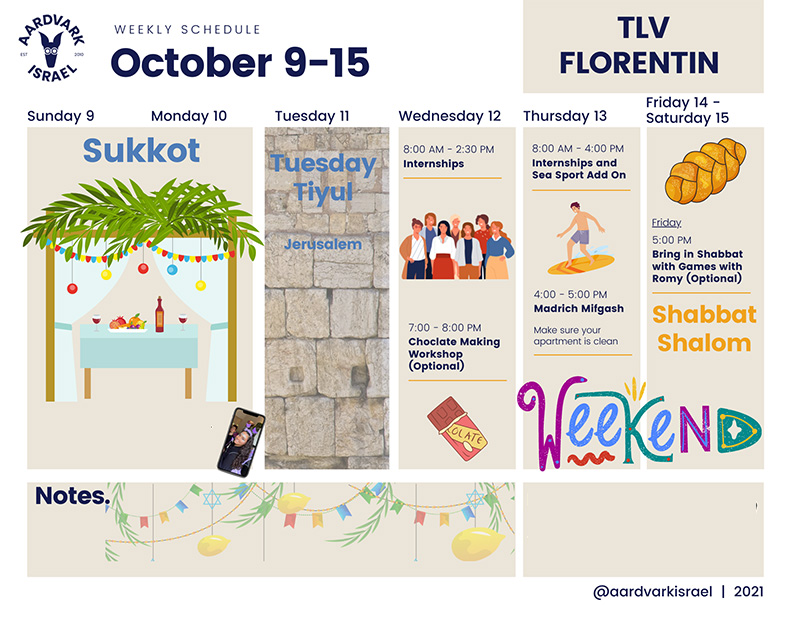 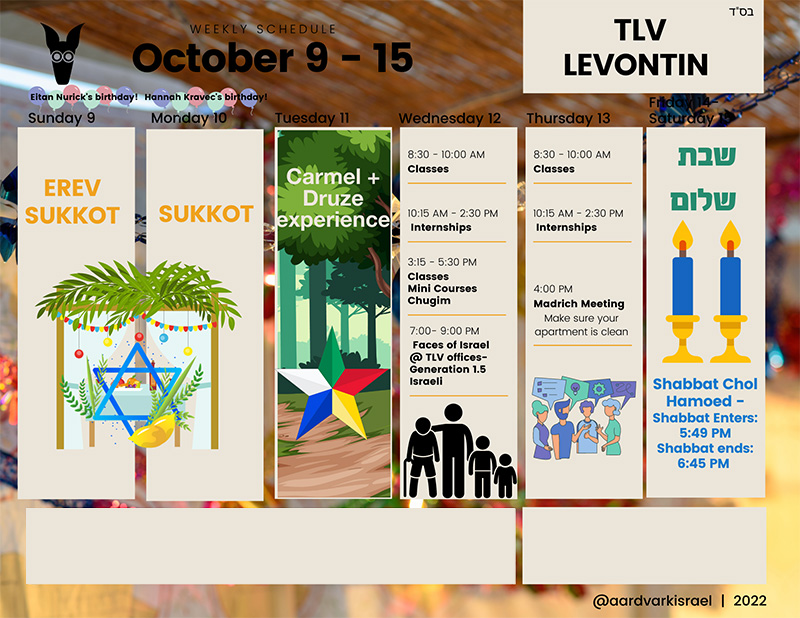 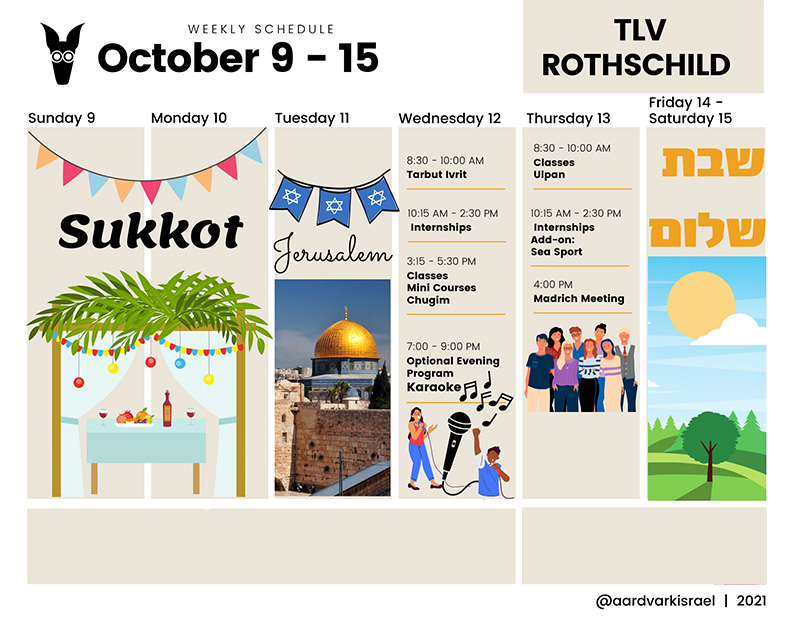 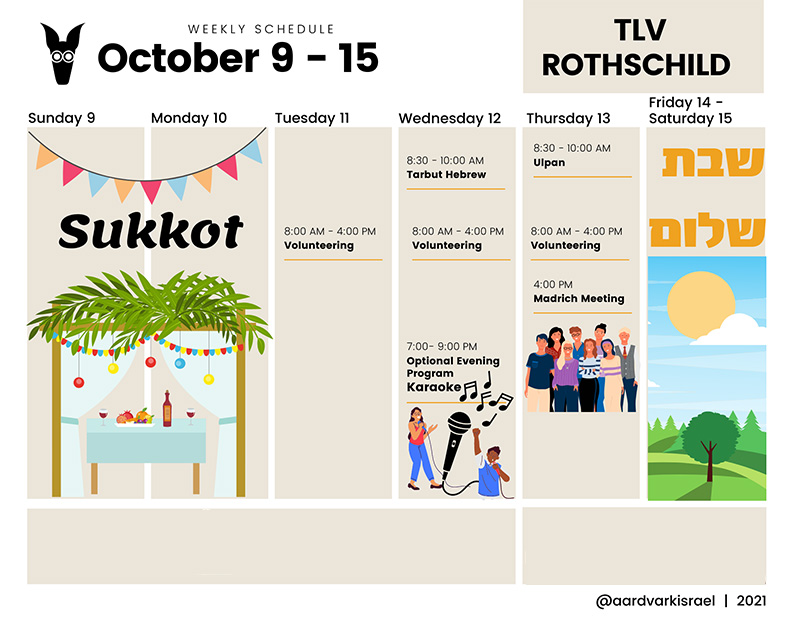