The week was really fun and I have lots to tell you, so let’s get started.

As usual, on Sunday, there were activities for both the Entrepreneurship and the Sea Sport groups.

The Entrepreneurship group had another session with Robert Frohlinger. The session was titled, “How can you help Israel continue to succeed in business”. The students discussed ways to do so, and dealt with questions such as ‘What is our place in Israeli businesses?’ and ‘Is moving to Israel the only way to support Israeli businesses?’ The lecture was fascinating and the students seemed to really enjoying the process they went through with Robert.

The Sea Sport group went kickboxing training at a local gym, it was intense and everyone got very sweaty. The training introduced them to a new sports method and afterwards they all felt rewarded by the activity. It was a lot of fun!

As you probably know, next week is Chanukah and we are all very excited for the opportunity to celebrate this special holiday with our students. In our opinion, it is also important that the students are able to have their own celebration and light candles together in their apartments like a family.

Therefore, on Monday, we had a special activity. We made clay chanukiot (menorah). Everyone was super creative and Jonah Rosenblatt even made a chanukiah in the shape of a cactus. We played Chanukah music and started to get into the holiday spirit. New we are all really looking forward to lighting the menorahs we made on Chanukah! Brandon Troy, said, “This year will be my first time celebrating Chanukah in Israel so I’m looking forward to the festivity, I enjoyed building my own menorah from clay with my mates and listening to Chanukah music.”

On Tuesday we had a unique experience that gave the students the chance to learn about the start-up business culture in Israel, a visit to the Taglit Entrepreneurship Center. Here we not only had the chance to learn about several new and upcoming evolving businesses, but we were also taught about the science behind it. The students were given the chance to explore different sections of this interactive and educational center. As part of the tour we met a young Israeli entrepreneur who told us his story and discussed important aspects of how the small country of Israel maintains such a successful stance in the world in relation to business. At the end of this hidden gem of a tour we were allowed to ask insider questions regarding anything of interest to us.

Naomi Pearl, said, “I have never been particularly interested in business. However, this tour really opened my eyes and I really loved the interactive part. From it, I was able to learn about the science behind the protective forces (such as the Iron Dome), water conservation, and app development. It was a pretty interesting tour overall, and I’m happy I got the chance to do it.”

This week in Parsha and Pizza we learned about the Torah portion of Vayeshev. Rabbi Marc told everyone about the amazing stories of Joseph. We learned about Joseph’s dreams, his multi-colored coat and his brothers’ plot to kill him because of their jealousy. Joseph was sold into slavery and found himself in Egypt in Potiphar’s house. Potiphar’s wife tried to seduce Joseph and despite his resistance, he was framed and sent to prison. While in prison he met Pharaoh’s baker and winemaker where he successfully interpreted their dreams and thereby comes to Pharaoh’s attention. The group discussed the significance of Joseph’s dreams and the motivations of the various characters. Some old commentaries interpret these events as revealing God’s master plan to eventually get the Jewish people to go down to Egypt. We also were introduced to a modern psychoanalytical reading of the dreams. Rabbi Marc ended with a focus on Potiphar’s wife and her attempt to seduce Joseph. In the mystical tradition, this moment represents a cosmic struggle of humanity with the Yetzer Hara (the evil inclination), a force so powerful that only a spiritual giant, like Joseph the Righteous, could defeat it.

On Wednesday evening, we had a terrific activity about the map of Israeli. At first glance, it might appear to be a straightforward topic. However, as we dived into the details it quickly became apparent that it is not so straightforward. For many people, both tourists and citizens, understanding the history of the land and its borders, from biblical times through to the establishment of the Jewish state, can be difficult and confusing. During the evening, using an interactive method and an actual map floor that was created during the program, we explored Jewish history, the history of Israel and the region, and the various sides in the contemporary conflict in the Middle East. During the program, we discussed important events from Jewish and Zionist history and examined them from a variety of perspectives.

In addition, I would like to tell you about, and also congratulate, two amazing students that finished their courses in the last two weeks. Nelly Broomberg has finished her MADA courses, in which she learned first aid and did shifts in an ambulance in Tel Aviv. Benjamin Lefkowitz has finished the Marva course in which he did military basic training and pre-army courses. We wish them both congratulation, we are all very proud of them!

Next week we will have a Chanukah party hosted by the culture committee and a cartoon artist will come to run a workshop about humor in Israeli culture and politics.

The Madrich on call for this weekend is Tal.

I wish you all Shabbat Shalom, 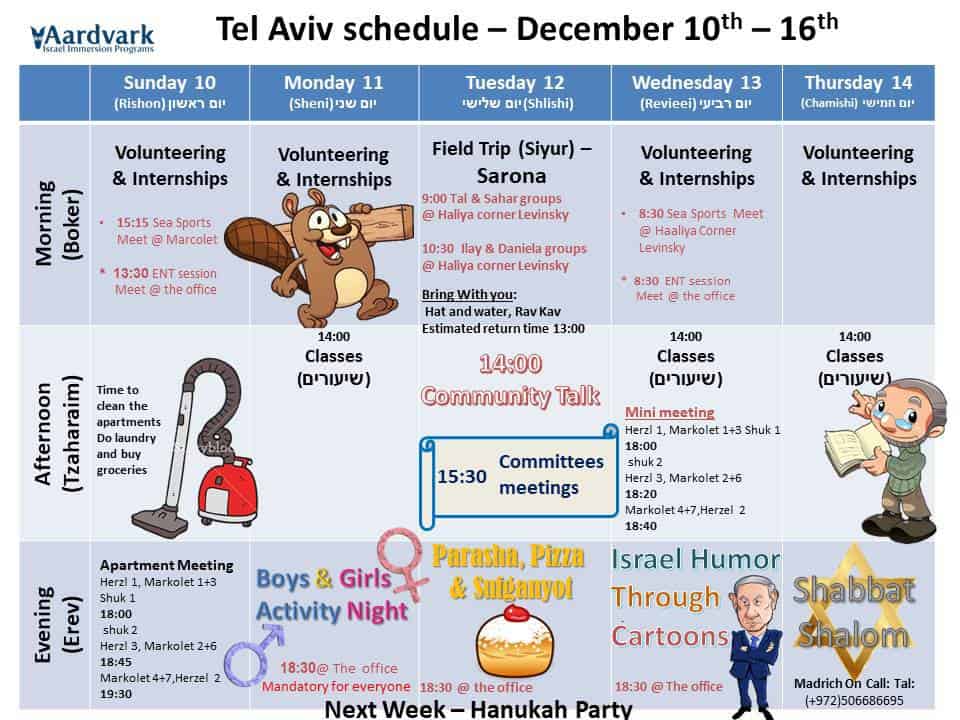