Skip to content
Our Admissions Team is on its way to London, and will attend Immanuel College, JFS and Masa Fairs! Don’t miss out on the information session on December 6th – email [email protected] for registration and the full schedule

Another week has come to an end here on Aardvark Tel Aviv.

Here are some of the week’s highlights.

On Sunday the sea sports group went to the marina in Herzlia for a boat cruise. The students had an awesome time. They finished the cruise with ice cream and they all agreed that it was a fun and bonding experience.

The entrepreneurship group went to Hiryia, the Ariel Sharon Park, an environmental park established on the former Hiriya waste dump located southeast of Tel Aviv. They discussed the entrepreneurial idea of turning a mountain of garbage into a beautiful park.

On Monday we had a special activity. The counselors turn the moadon into a coffee house. The activity utilized a method called “Café Dilemma”. The subject of the dilemma was Zionism. The students entered the moadon and were divided into three groups. They were given all kinds of food, such as omelets and pancakes, as well as a menu. The menu contained a dilemma that they needed to discuss while eating.
For example, one of the dilemmas was, “What is the difference between Zionism today and the Zionism of the past at the founding of the country”. The students had a very interesting discussion and it was a good opportunity for them to learn about Zionism and obtain a different perspective on the subject today.

On Tuesday, for our weekly trip, we went to a very interesting place called “Atachlit”. One of the objectives of this month is to get to know different cultures within Israel, in order to give the students a better understanding of the variety and diversity of the society. “Atachlit” is a place that offers an Ethiopian experience to the Israeli community. The place was established in order to give the elders of the Ethiopian community somewhere to work the land and deal with agriculture. The aim was to give the elders the opportunity to feel more significant and valuable in society. When we arrived, we were received with nice traditional hospitality. We were given “buna”, Ethiopian coffee, and “Injara”, Ethiopian bread. We listened to a lecture about the struggles of the Ethiopian community and about the idea of the “Atachlit” village.

Later we had two different workshops. One was a personal “Aliya” story told by a man name Eitan. He shared his fascinating and incredible story about coming to Israel. The second workshop was a clay art workshop. We had the chance to make dishes and other things using the traditional Ethiopian methods. We also found that many of our students are talented sculptors.

We finished the tour with a traditional Ethiopian meal, and yes, it was spicy!

The students had a great time and they were able to take a peek at one of the most interesting communities in Israel.

Rabbi Marc led another Parsha and Pizza session, this week about the portion of Chayei Sarah. In the Torah reading, we hear about the death of Sarah and Avraham’s purchase of a burial plot in Hebron. Avraham sends his servant Eliezer to look for a wife for his son Yitzchak. He finds Rivka, a woman who represents the quality of kindness (חסד). After the two of them get married we learn of Avraham’s death, as well as the passing of his son Yishmael. We focused our conversation on old age. Avraham is the first person in the Torah to be described as old (Bereishit 24:1) and we looked at Jewish perspectives on the elderly and the command to rise up before them and respect their wisdom and life experience. We looked at media, Hollywood, TV and commercials and thought about portrayals of older people in the Western world. The group asked themselves what it means to be young and why such preference is given to the youthful. Rabbi Marc brought some ancient sources that challenged the primacy of youth over the elderly.

On Wednesday evening we watched a film about a paratrooper unit in the Israeli army. It portrayed how difficult, yet rewarding, the army can be. After watching the film, we had an American/Israeli speaker, originally from New Jersey, come in to talk about his time in the army. After he spoke about his experiences training to be a paratrooper, he answered any questions we had. Ranging from how he felt when he got his first gun, to if he had ever been shot at. The most interesting yet terrifying story he told was how every day he would travel to the border while on patrol. Along the road, about 15 feet away from him, he would see Hamas members sitting outside of their posts drinking coffee and laughing with each other. He explained that seeing this every day was eye opening as it made him realize that they are people just like us. Even though they are the enemy and have a different and more violent approach, they believe they are the good guys, just like us.

Next week we have a speaker coming from an organization called Woman of the wall”. This lecture will hopefully help us to gain a better understanding of different aspects of gender and religion in Israeli society

The Madrich on call for the weekend is Daniella.

I hope you have a nice weekend, 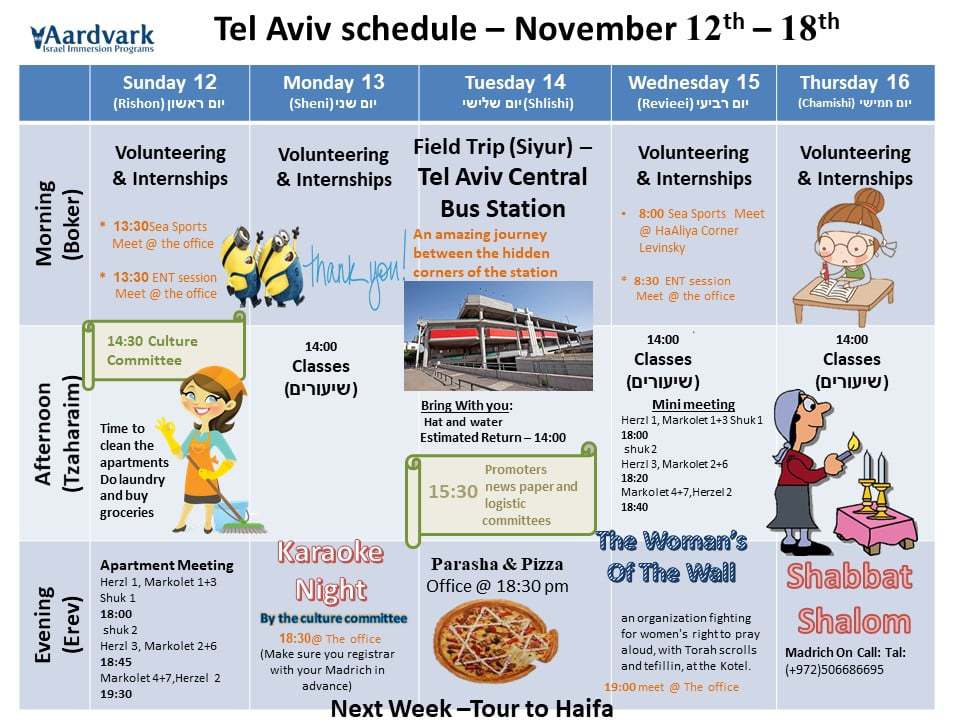