We’ve had a week full of activities and lectures, and I can’t wait to tell you all about it.

At present the students are beginning to think about their plans for the future. We are starting to hear from the students that they want to study at universities in Israel. Students are already filling in college applications. Some of the students are thinking about staying here in Israel when the year ends and some of them are working hard to figure out their paths to successes. They are all busy with different opportunities in the program and they look forward to the next semester and the future after the program.

The Madrichim are doing one on one sessions with the students in order to gain a better understanding of each student’s educational process. In the sessions they are discussing plans for the future, challenges in the program, thoughts, feelings, hopes, and wishes. Feel free to give your children’s counselors a call or an email if you would like to get more information.

On Sunday, in the apartment meeting, the students had sessions run by the counselors. They had a session entitled “My Israeli Journey” that continued the process of the personal mission statement. This was followed by an activity about different ways to approach a conflict.

The Sea Sport group went on a lovely peddle cruise on the Yarkon River, while the Entrepreneurship group had an interesting session about “Mamram”, is a technologic cyber unit in the IDF.

On Monday we had a special event run by the culture committee. The committee decided to arrange a Karaoke night for the group. The students arrived to a colorful Moadon for a fun and exciting evening. We discovered that we have some talented performers in the program. The committee took care of everything, including the snacks, a playlist of songs and more. Organizing the evening was a nice experience for the students, allowing them to be more active in day-to-day organization.

On Tuesday, we had a tour in an extremely unusual location, the Tel Aviv’s new central bus station. The group learned all about its architecture and design as they toured the giant monster of a bus station. There was a theatre, a mall, a Yiddish museum, and even a bomb shelter on the bottom floor. The bus station had partly been taken over by artists so there was a lot of amazing graffiti on the walls. It was very cool to see.

This week in Parsha and Pizza the group learned about the portion of Toldot, which describes the birth of Jacob and Esau and tells the tale of Isaac and Rebecca’s lives. Rabbi Marc brought us the idea that in many ways Isaac’s life can be seen as unremarkable, a close repetition of his father’s, Abraham, Abraham dug wells, so did Isaac; both sought refuge with Avimelech, the king of Gerar, when famine broke. Isaac can also be seen as passive, he is the object of the Akeida (Binding of Isaac) and Abraham’s servant chose a wife for him and brought her to him. Rabbi Adin Steinsaltz in his book Biblical Images teaches that Isaac is the continuation of Abraham. If Abraham was the revolutionary iconoclast that brought ethical monotheism to the world then Issac was the one who ensured the revolution was not fleeting but could take roots and remain. Isaac’s stability was crucial to the success of Judaism’s origin. Isaac was the only one of the forefathers to have had one wife whom he loved. Isaac also never left Israel. He is described (in Bereishit 26:12) as planting seeds and growing crops. Perhaps there is a message here that we do not always need to innovate and to seek out the new and different. There is a place in our world for being the continuers – whether that be of technological innovations, our parents’ values or even, the chain of Jewish tradition.

On Wednesday the add-on groups had a joint activity. We had the chance to run an activity that matched both Entrepreneurship and Sport. They all went on a Segway tour in which they were able to learn about the logic and the method behind the Segway initiative. They also learned to challenge themselves along the fun and interesting tour that they had.

Later that day, for our Faces of Israel activity, we had a speaker about an important and controversial topic in the Israel. We met a representative of the organization called “Woman of the Wall”.

The speaker explained the conflict regarding the Western Wall and told us about her experiences fighting for her believes. The lecture was interesting and the students expressed themselves speaking their minds. This issue of the woman of the wall reflects the disputes in Israeli society regarding gender and religion. It was inspiring to hear the different opinions of the students and seeing their level of involvement in the lecture.

Next week we are going to Haifa to learn about the history of the city and to continue our process of getting to know the diversity in Israeli society by visiting the Baha’i gardens.

The Madrich on call for the weekend is Tal.

I wish you all a nice weekend and Shabbat Shalom. 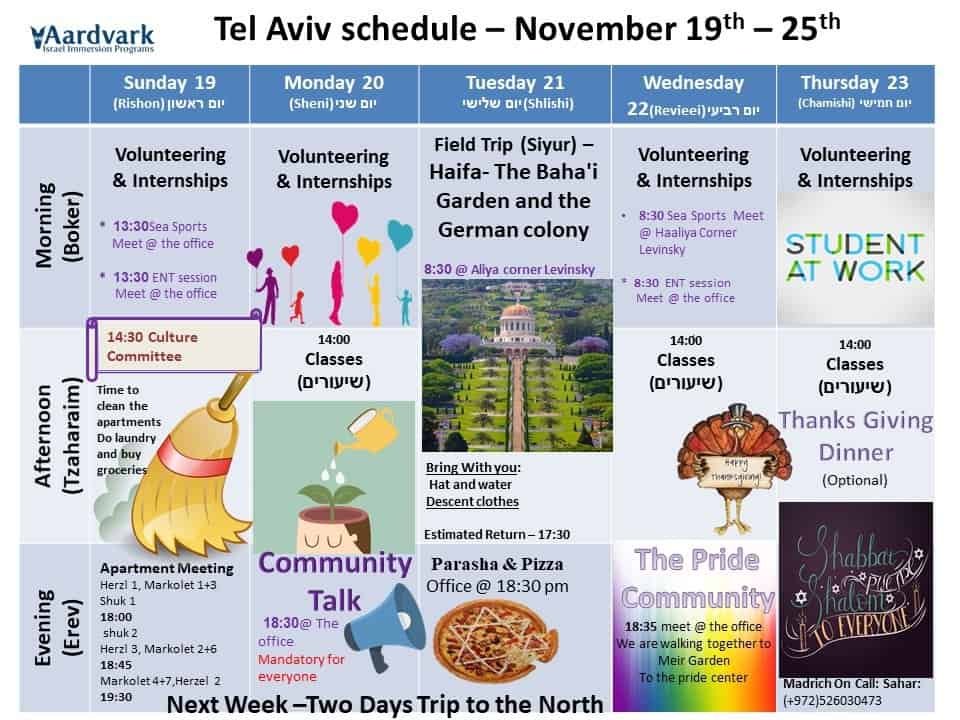