Our first day in Berlin has just ended and we are tired but extremely happy.

After a long night with very little sleep, we landed in Berlin this morning. We were picked up at the airport, left our bags in the hotel and dove straight into our schedule.

After the students ate lunch, we didn’t let a little rain stop us from venturing out into the streets of Berlin and we soon arrived at the “Story of Berlin” museum where we met Christian who took us on a journey through the history of Berlin. The tour took us from the early years, through the wars and the fall of the Berlin wall, teaching us all about the city’s history.

When exhaustion kicked in, we decided to return to the hotel to rest and restore our energy before heading for dinner at the “Cafe Am Neuen See” in the Tiergarten. It is a cafe surrounded by a giant park full of green trees and a running river. The students enjoyed a great first meal in Berlin and were able to see one of the city’s biggest parks.

Attached you can find some photos from our day!

Tomorrow we start early in the morning for another great day, stay tuned to find out all about it.

All the best,
Noi.

I hope you are all well.

Today we started extremely early; we left our hotel at 7am and headed to the Reichstag building. We entered the parliament and went all the way up to find a view through the modern dome on the roof of the old building. The dome has a ramp going all the way up allowing us a better look at the city. From our audio guides, we learnt about the parliament building, the structure and gained a great feel of the building’s surroundings. The view from the dome was amazing, overlooking memorials, monuments, Tiergarten Park and other important buildings in the surrounding area. One of the highlights was when returned back down and were able to see the German parliament in session, we even got to see Prime Minister Angela Merkel!!!

Because it was raining quite a lot today, we decided to change the plan a bit and we unable to visit all of the memorials that we wanted see. We exited the parliament and were able to explore a little bit before the rain caught us. We started with the Brandenburg gate, a city gate that one symbolized the division of Germany but now symbolizes the opposite – unity! We then continued to spend a little time in self-reflection at the memorial to the murdered Jews of Europe. The students had time to walk in between the giant concrete stones and think about what it made them feel and what the memorial symbolizes to them. Riana Schaff spoke about ghetto feeling and the different sizes of the stones that made her think about the different people we lost in the Holocaust. From there we made a stop at the golden statue of the victory column, however, as soon as we got there the rain started and we had to find shelter.

After lunch we took a train and went to an important meeting in the Israeli embassy in Berlin. As we entered the ship shaped building, we met the head of the Public Diplomacy department at the embassy – Rogel Rachman. In our hour and a half meeting, Rogel told us about his job and the embassy’s job in bringing Israel to Berlin in general and the Jewish community in specific. As a diplomat Rogel helped us understand a little more about modern day connections between Israel and Germany. The students had a short Q&A with Rogel and presented him with some tough questions about anti-Semitism and Germany’s view of Israel.

After a short rest in the hotel we continued to the beautiful area of Potzdamerplatz for some well deserved time shopping before dinner. Of course, the day had to end with a bang and we went to see the magnificent show Blue Man Group. In my opinion, it was one of the best shows that I have ever seen. The awkward, alien like Blue Men drumming on anything from PVC pipes to color dripping drums created a party inside the theater. In addition, we had our own Sahar Zingfer joining the performance as she was invited to come on stage. Cayden Smook said that the show was probably the best part of the day. Jon Zarzecki said he was really impressed with the show and wasn’t expecting to have so much fun.

Tomorrow we continue to travel and explore the great city of Berlin.

I am having some trouble uploading the pictures right now so I will try again tomorrow.

First of all I want to apologize for the delay to the email updates. Our Wi-Fi is not great, but I have managed to find a solution in order to keep you updated. 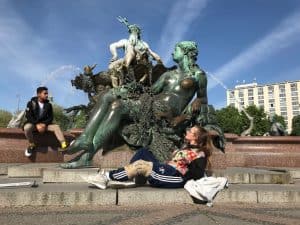 Yesterday we began the day by taking the train to Alexanderplatz Station and then walked to Museum Island. Museum Island is the name of the northern half of an island in the Spree River in the central Mitte district of Berlin. The area is home to five different old and popular museums and is an architectural masterpiece. While walking towards Museum Island we made a short stop at the Neptun water fountain and the TV tower, a needle shaped tower that is the tallest building in all of Europe!! Once we got to the island, we went to what is considered by many to be the most popular and best museum, the Pergamon museum. We spent about 90 minutes in the museum exploring the architecture of the orient. Its rooms are overflowing with some of the world’s most impressive, long buried treasures. The museum encompasses the vast history of the Ancient East, with collections that cannot be found elsewhere. The museum is named after the Pergamon Altar, a Hellenistic masterpiece of white stone architecture. Its artefacts have been gathered from countries in the Middle East like Iran, Syria, Egypt and the Caucasus.

From Museum Island we took a shuttle to one of the coolest places that I’ve ever seen. The shuttle took us out of Berlin to a place called Tropical Islands, an indoor theme park. You may ask what makes it so special. The building is one of the largest buildings on earth by volume, and is the world’s largest single hall without supporting pillars inside. What used to be a gigantic hangar for building airships in the Second World War has been converted into an awesome water park with scary slides, an indoor beach and a jungle full of wildlife like flamingos, turtles and parrots. Mikey Anfang told me that he thinks he may have been on each of the slides 10 times. 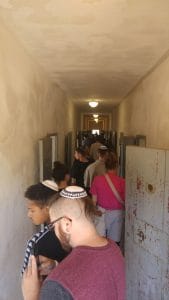 Today was a little more emotional as we began the day with a trip towards the city of Oranionburg and a visit to the Sachsenhausen concentration camp. Our tour guide, Nadav, took us back in time and gave as a glimpse of the horrific things that happened during the Holocaust. This concentration camp was overwhelming as it is located inside the city and was used to train the SS soldiers before they were sent on to other camps across Europe. It was also somewhat used as headquarters for the Nazi army to send orders to the other camps as well. The tour made us all very emotional. Keely Siegel asked me with tears in her eyes, “How are we suppose to process all of this?” The tour took us all around the camp. During the tour all you can hear are footsteps slicing through the silence and Nate Solkowitz told me something that stuck with me, “In the past the footsteps meant something else, today it means freedom.” We ended the tour with the blessing of Kadish for all of the murder Jews and sang “Oseh Shalom” in order to remember all the fallen, stay strong and never forget.

After such an emotional tour, we drove back to Berlin for some free time at Alexanderplatz. The students had time to explore this awesome place, which is home to a vast range of stores and restaurants, and as it was the weekend, there were thousands of people on the street. We continued to the DDR museum to learn about the lives of people in East Germany after the World War ended. We took a tour in this interactive museum and learned hands on about the division of Berlin, the wall and what was it like to live in a communist society. The DDR Museum brings the German Democratic Republic back to life as we learned about Stasi surveillance techniques, the history of East Germany, and about the everyday life of people in the former Soviet occupied zone.

To continue on the same theme, we took a train to East Side Gallery. This outdoor art gallery is painted on the remains of the Berlin Wall that once divided the city. A 1316 meter long strentch of the wall has been covered in graffiti to protest and as a memory of what happened before the wall was brought down in 1989.

To end our long and emotional day we went to a German restaurant. There we enjoyed some German cuisine like authentic Wiener schnitzel and spätzle. Everyone was extremely satisfied and happy after a meaningful day that combined history, culture and many emotions.

Tomorrow we continue on our last full day here in Berlin. Attached are some photos from the past 4 amazing days!! 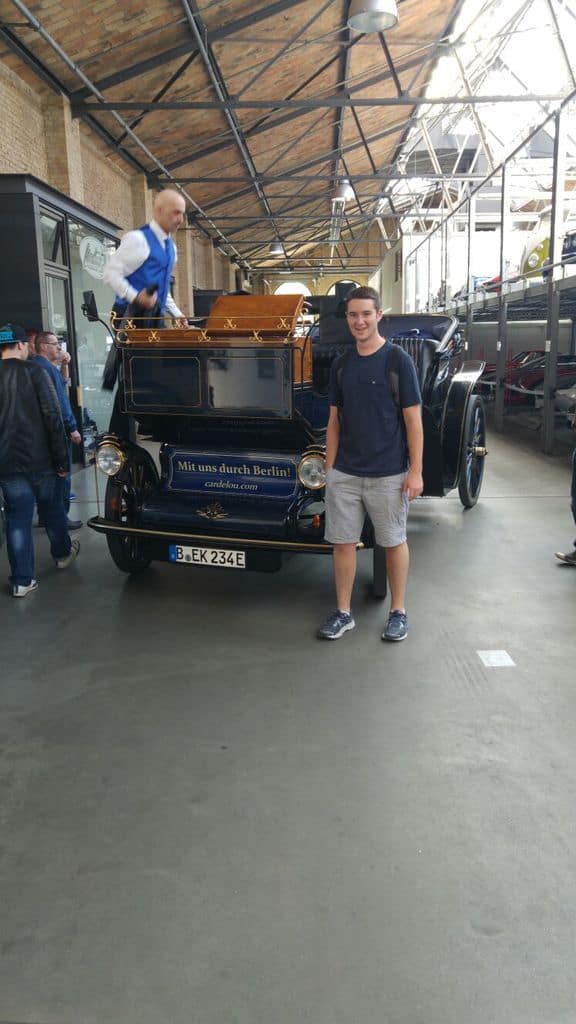 The final day began with something different. After breakfast we headed to the classic Remise car show. This car show was incredible. A combination of old vintage cars, motorcycles and modern supercars gave us an overview of how the world of motoring has developed. The car show had everything: Mercedes, BMW, Lamborghini, Ferrari and more. On top of that, there were garages there that carry out restoration and renovation on the cars in the show and others.

From the car show we went to a food tour of Berlin. We were divided into three groups and using an app on our phones, we navigated the streets of Berlin to find different cafes and restaurants. The groups enjoyed different “bites” such as paninis, raw vegan pizza, sausages, coffee, lemon bread and finished with some awesome ice cream for desert. The tour was not only about the food but also about fulfilling tasks on the way, such as taking different pictures and getting to know the owners of the business on a more personal basis.

After the food tour we travelled by foot to Maurpark. It is clear that it is a special place even when approaching from a distance. The park is located right next to a big stadium and every Sunday thousands of locals and tourists head there for different attractions. The park was full of live street performances such as juggling, beatboxing and different bands. People were lying on the grass, dancing to the music or having a BBQ. Next to the park there is a flea market full of vintage clothing, jewellery, lots of second hand goods, and many food stands. The entire place and its atmosphere was fantastic. The students enjoyed the free time to explore the area and absorb some the Maurpark culture.

We ended our day together eating dinner in an awesome steakhouse and enjoyed the most incredible food.
Now we are back in Israel safe and sound. I want to say thanks to all of the students because they made this trip extremely worthwhile for me. The students were great and kept a smile on their faces all the time. I also want to thank Sahar Zingfer who led the trip with me.