It has been an amazingly sunny week here on Aardvark Jerusalem and we are all enjoying the nice change from the rainy winter! Let’s take a look at some of this past week’s highlights!

On Sunday afternoon, our students went to pay their respects to the family of Zachary (Zechariah) Baumel. Sgt. First Class Zachary (Zechariah) Baumel was 22 when he left Yeshivat Har Etzion to head to war. On that fateful day in 1982, while fighting in Lebanon, he vanished along with Sergeant First Class Yehuda Katz and Sergeant First Class Tzvi Feldman whose remains are still missing. For 37 years, Israelis have been praying for his return to Israel. And now, thanks to an operation run by the Israeli intelligence services, his body has been brought back to Israel for a proper Jewish burial. One of the students reflected afterwards how special it was to be welcomed into the home of a stranger to give them your support and respect.

Joe Porter said, “Zachary’s sister told us the story of her brother and what life was like after he went missing in the war. We asked her how she was coping with the situation and she answered by saying that by starting her own family in the Jewish State of Israel, helped her understand the meaning of life and distracted her from her own struggles. The most moving part was when she told us how happy she was that we came to visit and took time from our busy schedules. She said that in her eyes, that was true Zionism and she will never forget us.”

On Sunday evening, for our apartment meetings, we had a boys and girls night!

The boys met with Ori, and had an activity called #SheToo. They spoke about how they see women today and where we are today after the #metoo movement and if anything has changed. They tried to understand the impact of the movement on society, and how the boys feel about it today. They had a simulation activity on how to talk to women and respect them. Afterwards, they went out to play billiards and had fun bonding.

Jasper Newman said, “On Sunday night we had a boys’ night led by our Madrich Ori. We started in the ulam with snacks and a discussion about what kind of behavior is appropriate as men. It was nice to have a refresher that we should doublethink before act, say, or do. We followed up our discussion with some pool at a local billiards bar. A great night with the boys.”

The girls met with Shalhevet, and talked about what kind of women we want to be and who our role models are, and in the modern world if a women still needs to “be a man” to succeed in society. Girls’ night wouldn’t be complete without a movie and ice cream. The girls watched ’She’s the Man’ and afterwards discussed gender roles.

On Monday night, Tsevet Mikey physically and emotionally prepares young men and women from all over the world who come to Israel to join the IDF, and provides them with a community of like minded lone soldiers during their service. Based in Jerusalem with trainings twice a week, along with special events, military rucksack marches (masa’ot), special forces tryout simulations (gibbushim) and lectures and lessons every month.

Eli Kreisberger said, “On Monday night there was an optional activity to participate in what is called Tsevet Mikey. Tsevet Mikey is an intensive pre-army training program that mentally and physically prepares young men and women for service in the IDF.  We had an amazing opportunity to participate in one of their training sessions, and I took away a lot from the experience. It was probably some of the hardest physical activity I have done in my entire life, but in the end it was worth it, and I am even thinking about going back next week.”

Tuesday in Israel was the day that all Israelis went to the polls to elect members of the 21st Knesset. In the Israeli parliamentary democracy, the President of Israel will, after the votes are tallied, decide whom to invite to form the next government based on his judgement as to which of the leading parties has the best chance of doing so. Every four years, just like in the United States, there are parliamentary elections…but unlike the in US there is no term cap meaning a Prime Minister can be elected many times in a row. There are approximately 41 different parties running in this year’s elections, which is a ton when compared to a system like the United States. Prime Minister Benjamin Netanyahu won Tuesday’s election and while his Likud Party and Benny Gantz’s Blue and White Party won 35 seats each, Netanyahu is the one who will be able to form a governing coalition.

This week on Selah, we took the train to Kfar Chabad, a delightful little village in the center of the country for Lubavitch Hassidim. The village numbers about one thousand families. We were given a guided tour around the main building – a replica of the famous 770 building where the Rebbe once lived in Crown Heights. We heard about the history and development of this branch of Chassidut and had the opportunity to ask questions about the life of Rabbi Menachem Mendel Schneerson – arguably one of the most famous and influential Jews of the last hundred years. We then had an opportunity to prepare and bake Matzot before seeing Israel’s largest Matza factory. We saw tens of workers put in eighteen-minute shifts (the time it takes for the dough to rise without becoming Chametz) in order to produce thousands of kilos of Matzot. We ended our tour with a walk around the groves where they grow Etrog fruit for Succot. It was so wonderful to connect to two of the three major Jewish holidays (Pesach, Succot and Shavuot – the Shalosh Regalim) here in Israel. We also wrapped up our Learning Space before the Passover break with a final opportunity to learn, grow and discover with our outstanding team of Selah educators.

Internship in the Spotlight: “Hi my name is Miquelle Taubman and I work in Sheshet Art Studios at Beit Alliance as a studio assistant/artist apprentice. Beit Alliance is an old building in the center of town that was taken over by a bunch of artists. There are studios of every type of art you can imagine, photography and videography, music, graphic design, sewing, jewelry, dance, and much more. Every day, I work with one of the six artists in the studio space and they give me a project to work on. Sometimes that means using the illustrator’s Wacom drawing pad to color in her sketches, designing and creating jewelry for the jeweler, cutting fabric for one of the two accessory and clothing designers, or other small or big projects around the studio. In addition, I am a photographer so I helped them make an Instagram account and will continue to help them run it. Through this internship, I not only have been able to learn and experiment with new art mediums, but I also have been able to see what it is like to work full time in the visual arts.”

Next week we will be visiting the city of Chevron as well as having an alternative Peach Seder and starting Spring Break!

Wishing everyone a Shabbat Shalom! 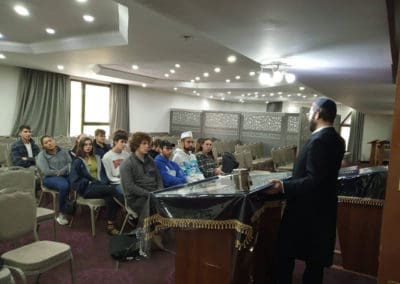 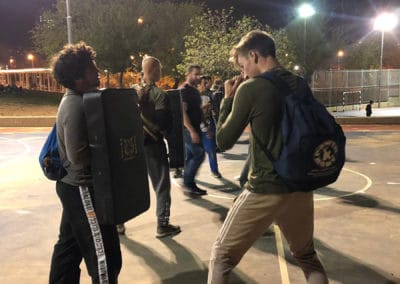 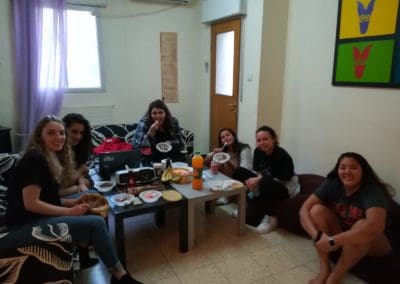 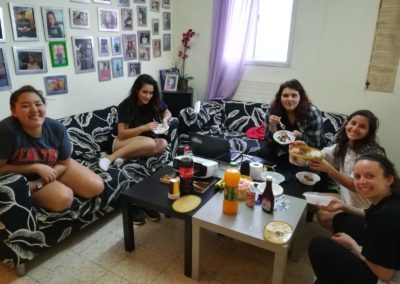 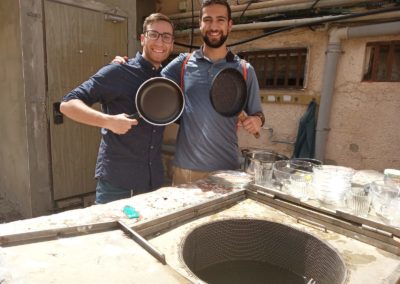 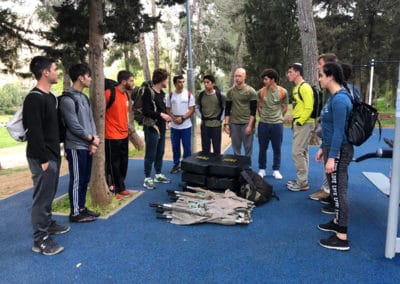 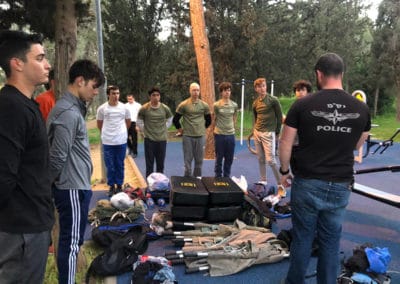 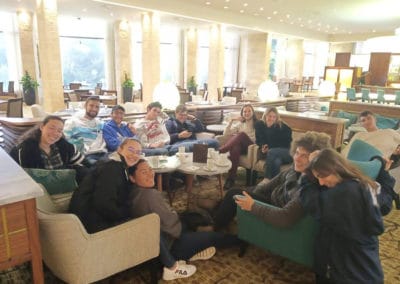 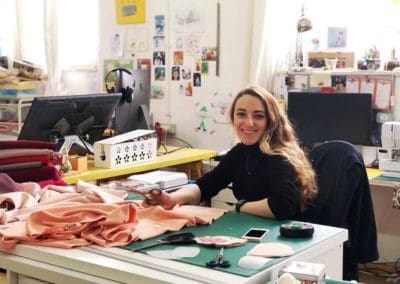 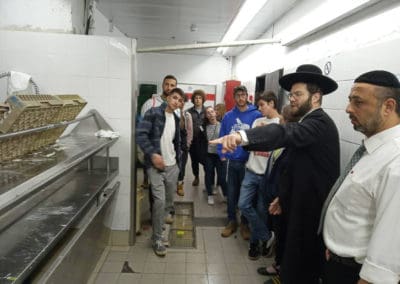 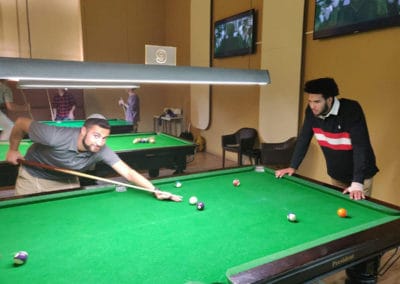 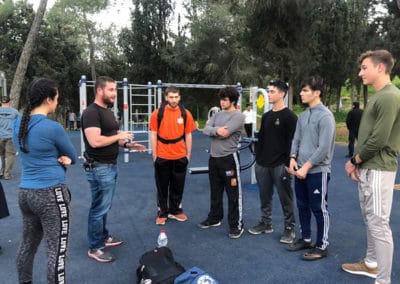