Today is the start of Spring Break and all of the students are on the way to celebrate Passover, some at home, some with friends, some are traveling within Israel and some outside of Israel.

Last Sunday afternoon, the students met with Charlee, and together created a Positive Post-Its Wall at the entrance of the building. Each student wrote down quotes, sayings and positive messages on Post-Its and we posted them in a place where everyone can see them as they come in and out of the building. The aim is to inspire each other and put a smile on each other’s’ faces when we leave in the morning and come back in the afternoon. After everyone created their Post-Its, we discussed the power of volunteering and how volunteering isn’t necessarily at a soup kitchen, or a park, or with the elderly, etc. but it is also in the small things we can do for each other, for example, a positive Post-It to make someone else’s day!

On Sunday evening, at apartment meetings, the Madrichim and students learned about going from slavery to freedom in theme with Pesach. They spoke about the changing in state of mind when going from “slave” to “freedom” and what that means in today’s society. Each person brought up something that they are slave to, whether it be addiction or something negative in their life and how they can change that and be more free.

On Monday night, Aardvark welcomed Haggai Kimmelman, a tour guide, the former Director of Institute for Overseas Youth Leaders, and currently working for the Jerusalem Municipality on integrating Hareidim into mainstream society, to speak to our students.

Haggai spoke about the history of Chevron and why it is important for us as Jews to learn about it. The students learned about the 1929 Arab slaughter of 67 Jewish men, women and children, of Israel’s stunning victory in the Six Day War when a cohort of Jews led by Rabbi Moshe Levinger returned to reclaim Hebron for the Jewish people, and about Dr. Baruch Goldstein, the chief medical officer for the Jewish community who entered the Machpelah Cave in 1993, where hundreds of Muslims were praying in Isaac Hall, and opened fire with his Galil assault rifle murdering 29 Muslims before he was beaten to death.

It was an informative session and the students learned a lot in preparation for their visit to Chevron on Tuesday.

On Tuesday, the Jerusalem and Tel Aviv groups together visited the city of Hebron – the only city in the west bank where Jews and Arabs live alongside each other. There, we went to the Avraham Avinu Shul, that was originally built in the 16th century and destroyed during the Hebron massacre in 1929 and since was rebuilt. There, we learned all about the history of the city and the Jews that have lived there over the years. A Rabbi from the community spoke to us and told us how he ended up in Hevron with his family. The Rabbi invited us into his home and all the students really enjoyed listening to him tell his life story and his connection to Hevron. They really connected with him, which was very nice to watch. We stopped at the Hevron museum and were able to see the history of the place, how complicated it is and how the Jews have been fighting to keep the land for so many years. After we had finished there, both the Jerusalem and the Tel Aviv groups went to a viewpoint from where the entire city was visible. We got an overview of the different aspect of daily life in Hevron. Everyone finished off the day by visiting Mearat Hamachpelah (the Cave of the Patriarchs) where the mothers and fathers of the nation are buried. It was a very spiritual experience to be able to visit and pray at such a holy place.

Aaron Davis said, “Today April 16th, Aardvark Jerusalem and Tel Aviv went to Hebron. While there, we saw ancient archeological sites that date back more than 4,000 years to the Kingdom of Judea. After learning that the four elements (fire, water, earth, and air) represent the four holiest cities in Judaism, we viewed the entire city from the Hebron Lookout. Our tour of Hebron continued to all the memorials of terror from both sides such as, the 1929 synagogue massacre, the Baruch Goldstein attack, etc. Learning that terror is not one sided and that even though Hebron is a controversial area, the citizens have very slowly found a way to coexist. Afterwards, we went to the tomb of the patriarchs and matriarchs (our Jewish foremothers and forefathers) where others and myself wrapped tefillin. Aardvark ended the day with a Passover sedar with candy representing the food on the sedar plate and dancing to Echod Mi Yodeah. Overall, what a day. In the words of the Great (future Rabbi) Josh Cohen, “What a day to be alive!””

Tuesday evening, we held a mock Pesach Seder with the students! Each student was assigned a different part of the Haggadah, whether it be saying the blessing over the 4 cups of wine (substituted for soda), to hiding the Afikoman, and reading the Mah Nishtana. We ate the Simanim on the Seder Plate (substituted for different gummy candies in the shapes of the Simanim) and each student went around the table and shared a tradition from their own Pesach Seder at home.  In addition, each student shared something that they would be freeing themselves of this Pesach. At the end, we sang the song Chad Gadya, and Michael Wolman told us some very insightful behind the scenes facts about the song. It was a night full of laughter, togetherness and a real feeling of family.

Sam Leopold said, “The Aardvark Jerusalem group has really become my family. I am so thankful I have had them this year and I have definitely been changed for better now that I have them in my life. I don’t want this year to ever end.”

Thursday was dedicated to cleaning the apartments for Passover, is a huge thing in Israel with everyone cleaning their places weeks in advance. The municipality adds extra days of cleaning services and additional trash trucks in order to collect all of the garbage that gathers in the streets.

In keeping with tradition, the students did a lot of cleaning with the assistance of their Madrichim. I wish I could show you their enthusiasm for cleaning (well most of them anyway).

Internship in the Spotlight: Hi, my name is Rachel Brandes and I’m from Sharon Massachusetts. I work in an art studio called BAARA – Jewelry. Craft. Design, as an assistant to Baara Guggenheim. The vision that Baara has for her jewelry is to create minimalistic, geometric and simplistic designs that are inspired by the city of Jerusalem. My job is to help assemble the pieces, make unique structures to display the jewelry and use my own ideas to create new designs. Working with Baara has helped give me the opportunity to use my creativity and realize my interest in design and styling.

The on-call schedule for Spring Break is as follows: 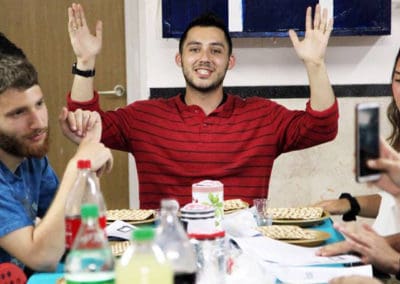 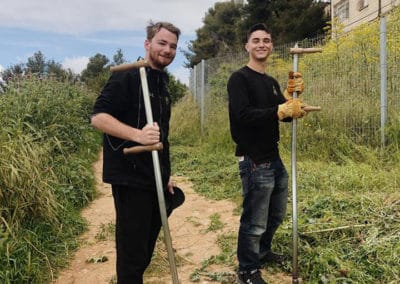 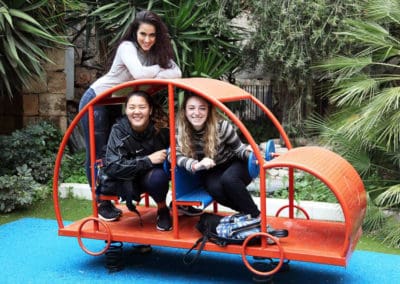 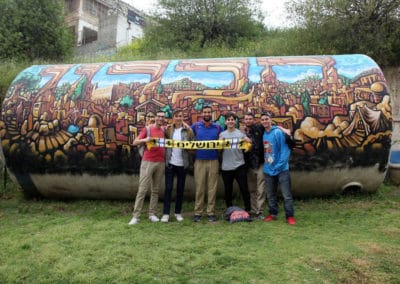 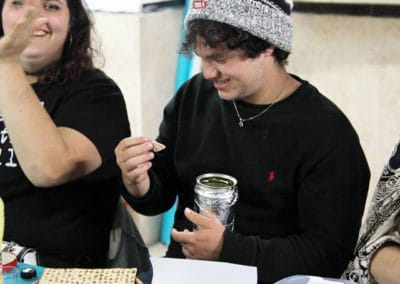 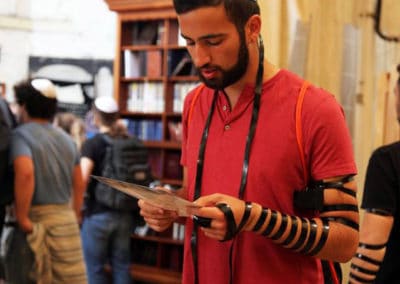 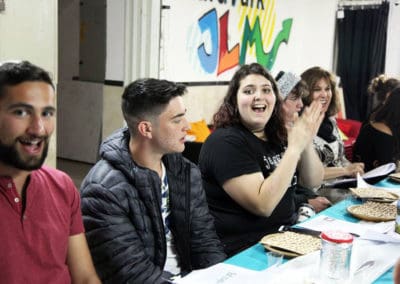 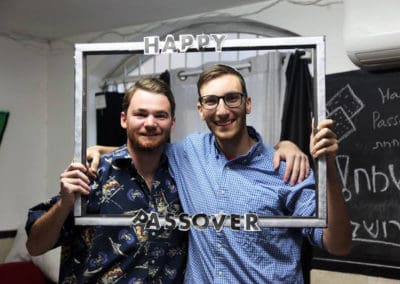 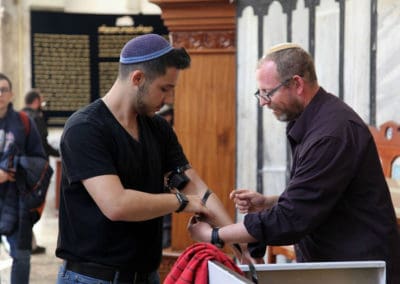 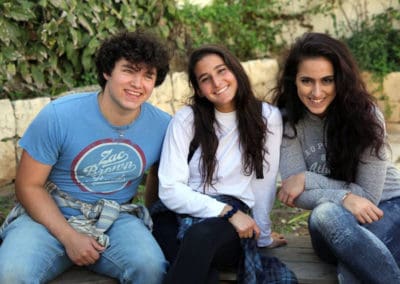 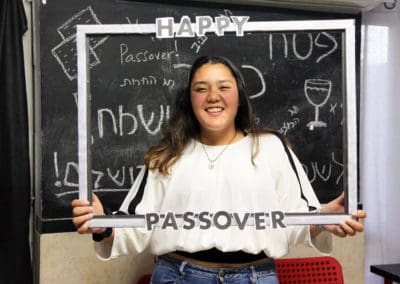 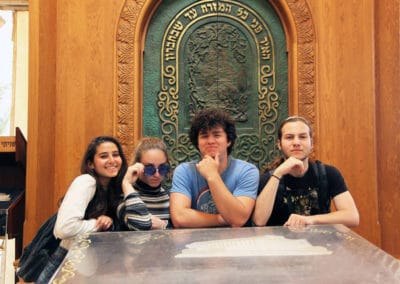 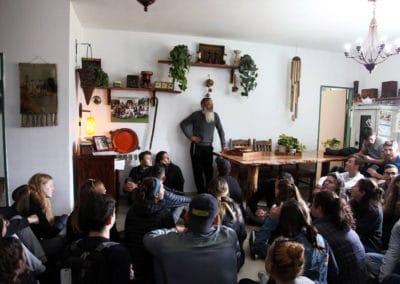