As I said in my last email, this period of the year is very special. 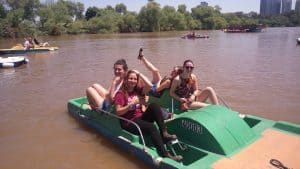 On Sunday, we drove all the way to Jerusalem in order to join the holocaust day ceremony in Yad Vashem. Our first stop was at mount Herzl. There the students took part in an activity about the Holocaust. Each student needed to choose from postcards (related to the Holocaust) that were spread out on the floor and to explain their choice. Daniel for example, chose a postcard with pictures of drunk soldiers acting violently. Daniel said that in testimonies from many Nazi soldiers they said that they were only a screw in a bigger system and that they cannot be held responsible for their actions. He said that he refuses to accept that excuse and that it reminds him of drunk college students that do stupid things without taking responsibility for their actions.

After the activity, we went to the national ceremony with the Prime Minister Benjamin Netanyahu and the President Reuven Rivlin. In order to get in we needed to go through massive security checkpoints. It took us more than an hour but it was worth it! We found ourselves at the center of the national ceremony that was broadcast to the whole country and I’m sure that some of you will have also seen it. The ceremony was truly meaningful thanks to songs, quotes and stories. On the way back I had the chance to talk to some of the students and they were really affected by it.

I highly recommend giving your child a call when you have some time in order to help them process their new understanding of the subject. It can be overwhelming, but it is an important experience that can only happen here in Israel. I believe that most of them had a point of reflection either during the national ceremony or the activity or even during the remembrance siren. Ask them about the events, they will most likely have a lot to say about at least one of them.

On Tuesday morning the group went to the annual Aardvark picnic in Hayarkon park, at the foot of the Yarkon river in Tel Aviv. The staff organized snacks, fruits and some more tasty stuff for breakfast. After sitting around and eating, the students started to play with the office’s Frisbee, matkot, cards and other games. At some point the students were surprised to learn that the staff had organized pedal boats for everyone – the staff, on the other hand, were surprised to see the students’ reaction. We’ve never seen people so excited by pedal boats! They were running into the boats, pedaling like crazy, splashing and laughing all around! I hope that the pictures will give you a better sense of what I’m talking about.

Jamiee Alster wrote a short of a summary about an activity called “Jewish Identities” hat the group had on Tuesday evening.

“On Tuesday, Aardvark Tel Aviv traveled all the way to Shfa’im to participate in a course on Jewish Identities.

In all honesty, we were all a little grumpy that this course would take away from our free time but I think that most of us can say (after the experience) that we all took something away from the event.

The event began with Rabbi Marc giving us a short ‘spiel’ about the importance of having a Jewish identity and the unfortunate trend of more and more people straying away from Jewish tradition and overall doubting their Judaism. It was very inspiring to hear his wise words.

After that, we went to a few activities.

Activity #1: The Tent of History
We walked through time (the tent) and learned about our history from Abraham to today. Most of the texts we read and saw brought feelings of pride and happiness, some of anger (e.g. the photos of how Jews were and still are stereotyped as controlling the world). Some had little to do with the overall big events in Judaism and more about the Jewish American community, and some mentioned dark parts of our past (e.g. the roll Jews in America had in the African-American slave trade back when it was legal). Overall, it was my favorite activity out of the four I took part in.

Activity #2: Israel and Agriculture
We learned about the amazing innovations Israel has made in terms of agriculture. We saw a modern way of planting food and plants (a standing planting system without using soil) and had a conversation about Jewish environmental ethics. Some of us want to take this idea to Marcolet rooftop! (The upper apartment in the Marcolet Street building)

Activity #3: Facebook Politics
Here we were asked to ‘like’, ‘heart emoji’ or ‘angry emoji’ well-known posts about Judaism and Israel.

Activity #4: The LGBTQ Discussion
This one became very heated, a microcosm for Israel’s political stance on this issue. We discussed whether Jewish law and politics should be one or completely separate. In particular we focused on an issue that arose a few years ago involving the LGBTQ Israel community, where a women supporting the ‘gay parade’ in Jerusalem was stabbed by an ultra-religious adherent due to his distaste for supporting and being a part of what he viewed as a Jewish sin. We discussed whether having the parade in Jerusalem should have even been allowed. Ultimately, we failed to find consensus on this issue.

Overall, the Jewish Identities event was very informative and interesting. It was something that as Jews was important for us to see and partake in.

Sam Kotek asked me if I can help him spread the word about a campaign he is running in order to raise money for Holocaust survivors:

“My boss, Adar Weinreb, the co-founder of Joy Records asked me to help him with a project he started. It appealed to me a lot because all of my grandparents are holocaust survivors and I just couldn’t imagine that so many holocaust survivors are actually living in poverty. So I started a Facebook campaign and I’m getting people to spread the word of this campaign and to donate a little of their money”
Click Here to see the Webpage he made and a short video explaining more of Sam’s project.

Next week will start with the Memorial Day for the fallen soldiers and victims of terror. We will participate in the MASA ceremony and will go to volunteer at the main cemetery in Tel Aviv. The next day we will celebrate Israel Independence Day with a traditional Israeli barbeque.

That will all for today,
Until next time,
Shabbat Shalom, 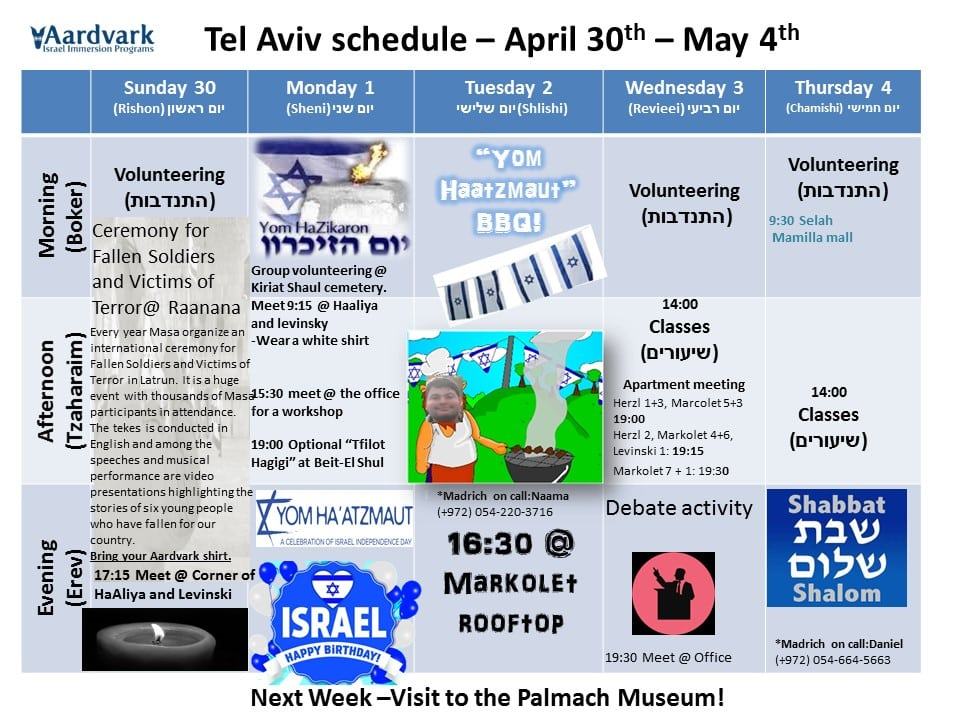