We hope this email finds you well.

While Adi is off having fun leading the international trip in Ethiopia, I’m more than happy to share our news with you J

It was a great week for us and here are some of the highlights:

On Monday we participated in an activity about the Israel-Palestinian Conflict run by Windows, a non-profit organization comprised of Palestinians and Jews that work together for a democratic future for the region. The group was split into two smaller units and each group was given its own space for the activity. On each classroom’s wall there were some sentences about beliefs or myths within Israeli society. For instance: “A people without a land returned to a land without people” or “The Jewish people returned to their land after 2000 years of exile.” The aim of the activity was to explore these ideas and encourage further discussion on the most widely held beliefs and how they came to be; the activity definitely achieved its goals. The group was very engaged in the discussions and they provoked many interesting questions.

On Tuesday we went on a trip to Dialogue in the Dark, a unique museum which allows people to experience what it is like to be visually impaired by simulating complete blindness. The group started the exhibit with a trained guide who is visually impaired. Since we were in the dark the students were only able to see the guide at the very end of the tour. During the tour, the group experienced simulations such as going on a boat, picking fruits at the marketplace, crossing the road and many other everyday activities. Being led through the different simulations by someone that cannot see taught us a lot about perceiving challenges and overcoming difficulties. There is no way of taking pictures on the tour so you will have to imagine what it was like.

This week at Parsha and Pizza the group explored the Torah portion of Beshalach. The weekly reading is packed with drama. The Egyptians pursue the Jewish people and God splits the Red Sea in two. The Jewish people are saved and sing out in faith and joy to God. However, this spiritual high lasted a very short time and the people begin to complain and moan almost straightaway. The portion ends with Amalek attacking the people. Rabbi Marc spoke about the importance of faith and the fact that when the Jews reached the Red Sea, they literally had to take the plunge into the waters before God would split the sea for them. We watched a clip from an Indiana Jones film as inspiration to think about faith.

On Wednesday the staff held an activity called “Café Ivrit” (Hebrew Coffee). We booked a table in a coffee shop and invited the students to drink coffee (or chocolate milk) “on the house” and to practice their conversational Hebrew, the slang that we Israelis use on a daily basis. It was another opportunity for the students to practice Hebrew in an everyday environment.

This week at Selah: On Sunday, at Lunch and Learn, there was a round table discussion at a restaurant about Jewish ethics and commandments. The group explored moral issues and questions in contemporary Judaism and read a provocative text about the diversity of Jewish demands on our dealings with other people. At Tuesday night’s Bet Midrash Rabbi Marc led a study session about judging other people. The group read the famous story of Hillel and Shammai and the convert (Talmud Shabbat 31a) – A person asked to convert to Judaism while standing ‘on one foot’. Shammai sent him away but Hillel accepted him teaching him the famous ideal – ‘That which is hateful to you, do not do to your fellow’. The group was asked to think about the different ways each sage looked at the convert and to apply the two approaches to their own friendships. Thursday saw the group go on a walking tour of the neighborhood with Rabbi Josh Gerstein (who served as Aardvark Rabbi until a few years ago). The group went to the site of the Gimnasia – the first Hebrew school in Israel as well as the Great Synagogue. On the walk the group heard stories about the origins of Tel Aviv and how the founding fathers of Zionism grappled with the question of the Jewishness of the future Jewish state.

Below please find some great pictures from this week as well as next week’s schedule.

Shabbat Shalom and have a great weekend,

Shay-El and the Aardvark Staff 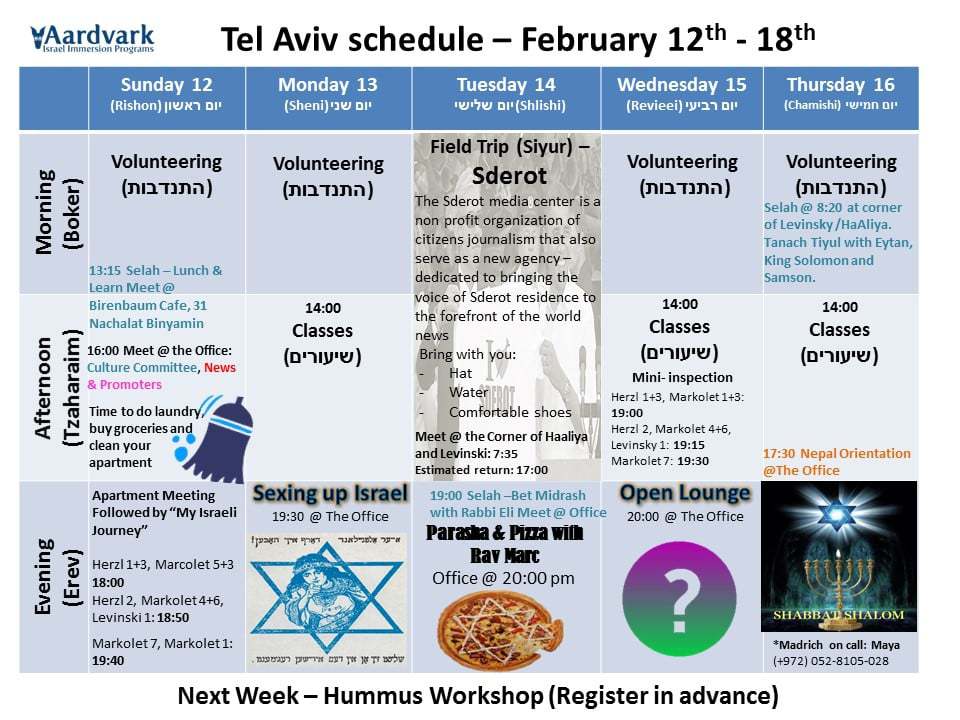 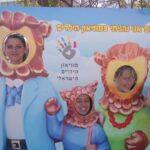 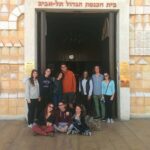 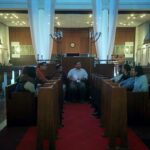 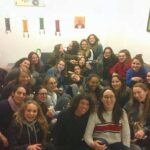 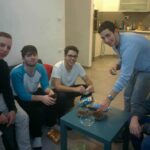 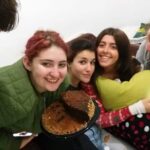 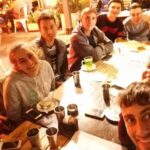 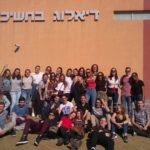