I hope this email finds you well.

Eyal is currently leading our Nepal cultural change international trip, so in his place I’m happy to tell you about all of the great activities we had this week.

On Sunday, after the great Shabbaton, the entire program had the day off to sleep, relax and recharge for the upcoming week.

On Monday evening, we had our regular apartment meetings. The counselors summarized the Shabbaton, ran a group dynamic activity (based on the needs of every apartment) and discussed the events of the upcoming week.

On Tuesday, for our day tour, we went to the Palmach Museum. The Palmach, an acronym for Plugot Maḥatz (“Strike Forces” in English), was the elite fighting force of the Haganah, the underground army of the Yishuv (Jewish community) during the period of the British Mandate for Palestine. The Palmach was established on 15 May 1941. By the outbreak of the 1948 Arab–Israeli War, it consisted of over 2,000 men and women in three fighting brigades together with auxiliary aerial, naval and intelligence units. With the creation of Israel’s army, the three Palmach Brigades were disbanded. This and political reasons led to many of the senior Palmach officers resigning in 1950. The Palmach contributed significantly to Israeli culture and ethos, well beyond its military contribution. Its members formed the backbone of the Israel Defense Force’s high command for many years and were prominent in Israeli politics, literature, and culture. During the day, the students learned about the organization and its role in establishing the Israeli state as well as about the mid 20 century. The Museum itself is very special with an interesting design, there are many different rooms and in each room that you go through there are many short videos meant to depict the period when the Palmach was active.

This week in Parsha and Pizza, we completed the book of Shemot – Exodus – the second of the Five Books of Moses. We studied sections from the Torah portion of Pekudei and thereby ended a five-week unit focusing on the mobile mini-temple that the Jews built in the desert, called the Mishkan. It was the perfect opportunity for Rabbi Marc to teach us some of the symbolism of the Mishkan and how some Jewish thinkers compared its structure and form to the human body while others likened it to the shape of the Universe. Clearly, the building itself was not just a focal point for religious worship and ritual, but also a symbol of the meeting point between heaven and earth, the human and the divine. We also heard about the making of the washbasin and how the women used their mirrors to adorn it. We studied an ancient legend around this washbasin that highlighted the amazing role of women during the Exodus. The evening ended with our discovery of how Moses and God actually set up the Mishkan. After weeks of gathering materials and donations and many days of artistic design and production, all of the parts were ready to be constructed. Moses struggled to set it all up alone, and according to one tale in the Midrash, God helps out by miraculously standing the whole thing up in an instant. The group chatted about whether they prefer God to take the lead, humans, or a combination of the two. It was a fascinating evening.

On Wednesday evening, we had an activity about the LGBT community. We met a wonderful and fascinating woman named Zehorit Sorek.

Afterwards Yoni Ben-Naim said, “She talked to us about her life story and her struggle to realize and come out as a lesbian while growing up in an orthodox household. The challenges that she faced with coming out to the people close to her helped her realize that a change needed to occur in society. She is now dedicated to making a change in Israeli society to help them better understand the LGBTQ community. In addition, she believes that helping LGBTQ communities find their Jewish connection is vital: she established the very first LGBT synagogue where all Jewish people are welcomed and accepted. These days, she is a part of the Yesh Atid party and hoping to be the first lesbian member of the Knesset with a focus on fighting for the equality of LGBTQ communities across Israel.”

On Thursday, we followed our regular daily routine with internships and classes. Today, in the intro to psychology course, the students are learning about the process of memory. Specifically, they are learning that there are three types of memory, Episodic, Semantic, and Procedural memory.  Episodic memory entails a particular event that occurred while a person was present. Semantic memory deals with a type of memory with generalized knowledge of the world like who is Israel’s current Prime Minister, and Procedural memory is a type of memory containing information concerning how to do things like driving, riding a bike, gymnastics, etc.  During this week, the instructor will be taking the students out for a mini field trip to Rothschild Street in Tel Aviv to observe people, develop a hypothesis, theories and randomly asking people one or two questions regarding their memory.

Selah has had a wonderful few days as well. After last week’s incredible Tanach Tiyul to Tel Bet Shemesh where we could see where Samson and Delilah roamed, we began this week with a nighttime trip to the Movies. We hired out a private cinema and met Ittay Fleshler, an inspirational teacher who combined screenings and discussions based around the hit TV series Orange is the New Black. Ittay told us about the show’s Jewish director and raised many questions about Jewish identity, kashrut, and conversion through scenes taken from the show’s third series. We also continued our weekly Learning Space. The Tel Aviv group continued their prayer-song workshop and concluded their two-week study of the Mitzvah of Tzedaka. We made charity boxes and each student was able to choose their preferred cause. The Jerusalem group had a trip to the Israel Museum where they visited the archaeology exhibit and saw reconstructed synagogues from around the world. We got to see ancient Megilla scrolls in advance of Purim and had a chance to see the original signed copy of Maimonides’ first book. 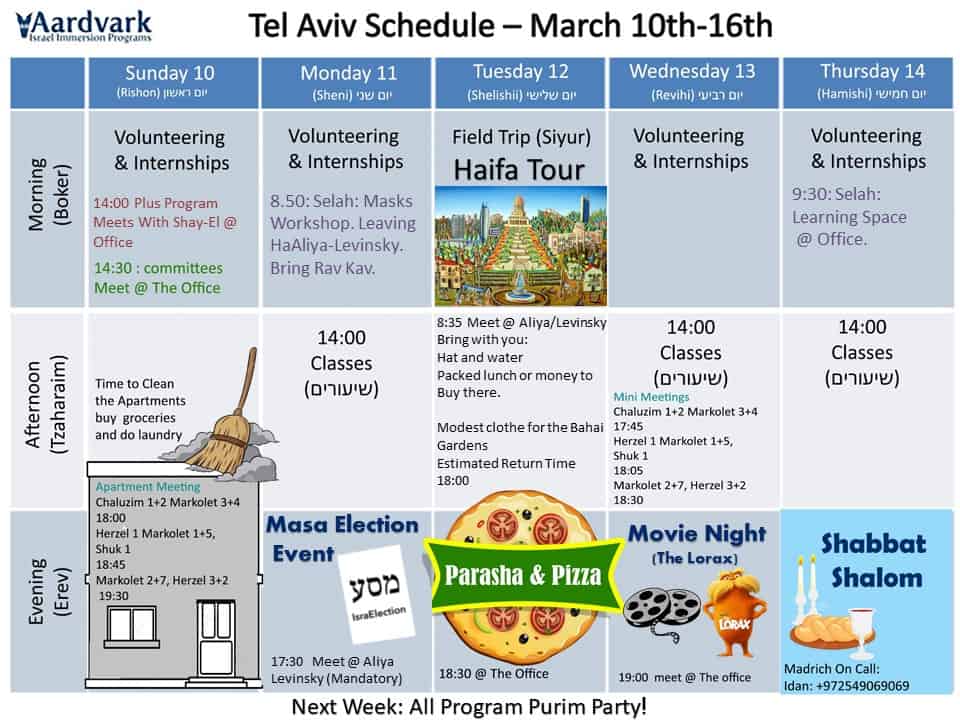 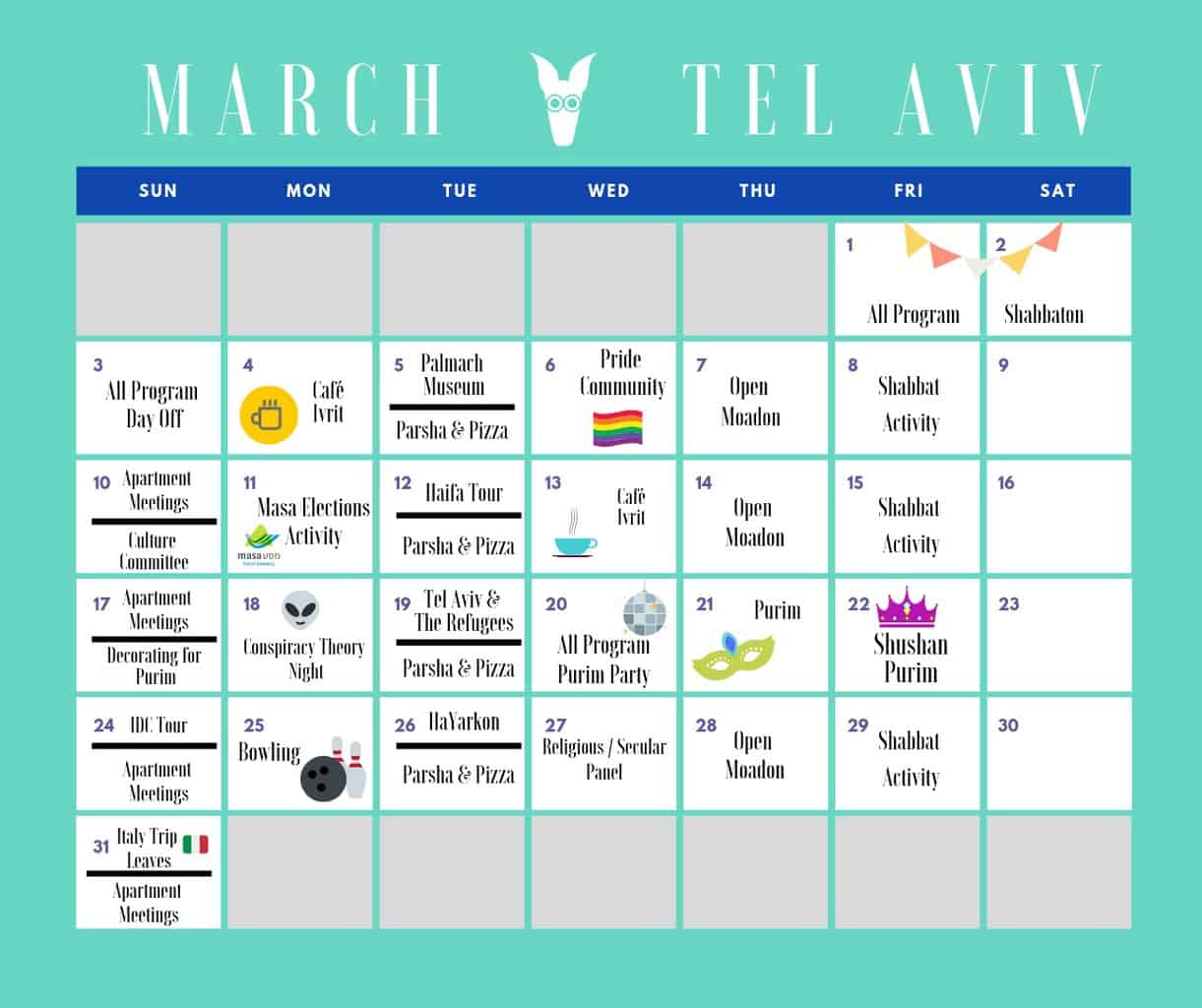