I hope this email finds you well.

I am happy to share this week’s highlights from Aardvark Tel Aviv: 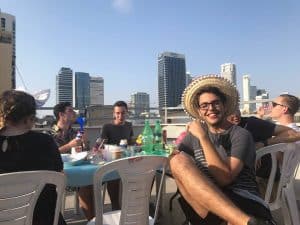 On Sunday, we all went, both the Jerusalem and Tel Aviv groups, to a very special Yom HaZikaron (Memorial Day) ceremony organized by Masa and attended by several thousand people from different programs. It began with some words from Natan Sharansky, the human rights activist, author, Israeli politician, and refugee from the Soviet Union during the 1970s and 1980s, who spent nine years in Soviet prisons. The ceremony was an impressive and beautiful way to honor the many soldiers and victims of terror who have fallen for our country. During the ceremony, the family and friends of six individuals shared stories about their loved ones through songs, videos and personal stories. Among the stories was that of Ezra Schwartz, a Masa participant studying in a yeshiva who died in a terror attack last year.

On Monday morning, the students went to Kiryat Shaul cemetery (Tel Aviv’s main cemetery). There the students visited some graves, lighted yahrzeit candles, spoke with families who were visiting graves and heard their stories. The students then went to an IDF ceremony led by the army forces. The government’s representative at the ceremony was our minister of defense, Avigdor Liberman. After lunch the students met in the office for a short debrief (we discussed what they had been through in the last 24 hours) and participated in a program led by their Madrichim (counselors).

We would like to highlight to you that Israel during Memorial Day is an entirely different place than it is on any other day or holiday, and from what we have learned from our students, it is also distinct from any other Memorial Day in the world. Some students experienced it for the first time: standing still during the memorial siren and attending ceremonies, preparing ahead because all the shops close for Memorial Day, and hearing dozens of stories about those who fell defending our nation. We were all surprised by the willingness of the students to talk and share their thoughts and feelings. It was as if they were just waiting for a platform to express their experience. We encourage you to ask them about these experiences as well!

The end of Memorial Day leads straight into the beginning of Independence Day. On Tuesday, the staff invited all the students to the traditional Aardvark Independence barbeque on the Markolet Rooftop. Every Independence Day Israelis pull out their barbeques and grill all afternoon, so whether you want it or not, you will smell of barbeque by the end of the day. Our Aardvark barbecue was fun and delicious. The students played music; we hung around on the rooftop balcony eating hot dogs, hamburgers, chicken kababs, and an assortment of salads and chips. We ended our BBQ with a spontaneous dance session. It was incredible to watch! 🙂

Ashley Amaltov and Natalie Delle wrote about the experience:
“The day of Yom HaZikaron was a very emotional day, especially mourning amongst the friends and families at the cemetery who have lost their loved ones. It was a very special feeling to know that all of Israel united during the time of the siren to remember those who sacrificed their lives for this country. The unity continued through the evening and the next day with Yom HaAtzmaut. The direct transition from sad to happy seemed strange at first, but it made us appreciate how lucky we are to have this country. The streets of Tel Aviv on Independence Day, Israel’s 69th birthday, were filled with people celebrating in blue and white and it was really exciting to be a part of”.

On Wednesday, we had the privilege of having Brian, an ex-lawyer from America who lives in Israel, teach us about debating. He went into detail giving us various strategies to help win arguments with anti-Zionists. For example, he told us that you lose arguments when you get angry and you should only debate if there is a third party present (the audience). It was one of the best Aardvark activities I experienced this semester. It was very helpful in preparing the students with the tools they may need to defend Israel when they are back at home.

Ricky Studencki mentioned:
“Having Brian teach us from his experience of how to debate against people and win is golden knowledge. Brian was entertaining and had a great sense of humor. He also was incredible at keeping us engaged throughout the whole activity.”

That’s all for this meaningful week.
Shabbat Shalom,
Shay-El 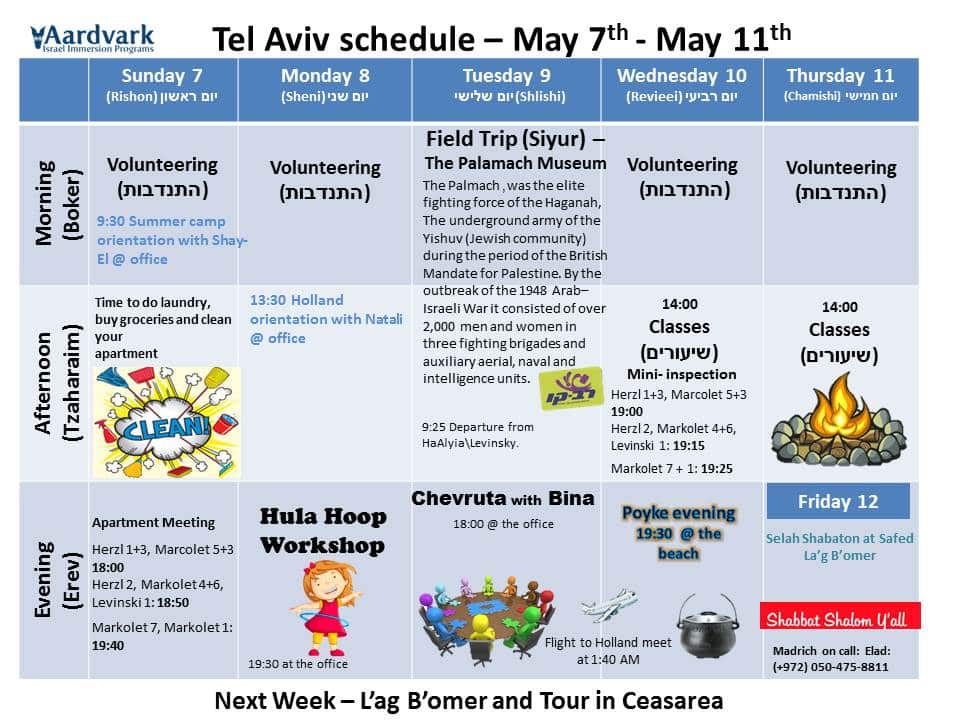