After the spring break ended, our students returned to the program with lots of happy and exciting experiences, trips and stories to share with everyone about their time at home or abroad with family and friends. We, Aardvark Tel-Aviv staff, were all looking forward to seeing our students again and we chose to welcome them all back on Sunday with apartment meetings that finished with a big BBQ that included lots of food, music and small talks.

It was amazing to see how much everyone missed each other and how eager they were to reunite after just one week of separation. The food was great, the atmosphere was charming, and everyone recharged ahead of the complicated week that was to come with Holocaust Memorial Day.

On Monday evening, after classes and internships, the students met at Gordon Beach for beach volleyball and to take advantage of the lovely spring weather that has finally arrived to Tel-Aviv. The students and the staff put together teams and began a tournament that was an hour and a half of fun and competitive games. After the activity, everyone returned tired but happy.

On Tuesday, we journeyed to Kibbutz Lohamei HaGetaot. The Kibbutz was founded by Holocaust Survivors immediately after the State of Israel was formed. There is a museum on the Kibbutz dedicated to the Shoah and the resistance and fighters of the ghettos. We had a fascinating tour of the museum that highlighted many aspects and new perspectives on this tragic period. We saw an enlarged map of Europe with flashing lights representing different locations of important sites – red bulbs lit up for the concentration camps, white lights shone for the extermination camps and yellow bulbs glowed for the Jewish communities. The map helped us understand the historical chain of events and the scale of things across Europe and the world as a whole. Another exhibition room had an interactive display of objects from the beginning of the Holocaust. You could press a button and a draw would open containing an object while on the digital screen, you could read and learn about the object’s story. Being able to see a tangible item and to connect it to a personal story really brought the Holocaust much closer to our hearts.

In addition to these exhibits, we were able to explore two different perspectives on the Holocaust. One was an amazing display which told the story of the Eichmann trial, the students heard testimonies from the trial and had a fascinating discussion about “What is a murderer?” and “Does simply following orders makes a man innocent of his crimes?”. The second perspective was an exhibit telling the story of the rebellion of the Warsaw ghetto, the exhibit is a significant and powerful educational tool.

After the visit, the students met on the lawn of the kibbutz and talked to their madrichim about the day they had and all of the things they learned and concluded. This was a very special and important day to us all at Aardvark Israel and we really hope we helped our students understand and appreciate Holocaust Memorial Day and its victims, survivors, warriors, and heroes. Always remember, never forget.

This week in Parsha and Pizza, we studied the portion of Kedoshim. We did a survey of the more than 50 commandments that appear. Rabbi Marc taught the group some commentaries about the concept of holiness. The portion begins with God telling the people to be holy, “For I the Lord am holy.” We compared the differences between Jewish and non-Jewish holiness. Often people think of saints, nuns, monks, yogis, swamis and the like. This week’s Torah gives us an alternative conception of holiness – not separating ourselves from the world and meditating alone on a mountaintop until we achieve communion with the spirit world, but rather anchoring ourselves in our communities and living in the real world. This is why the Torah contains commandments about honoring our parents, paying our workers on time, ensuring a fair legal system, leaving crops for the poor, sexual ethics, not bearing a grudge and not gossiping about others. This is the Jewish way to achieve holiness.

Wednesday night, we joined the Jerusalem group for a lecture from a man called Pavel Batel. Pavel is a Terezin guide, historian and writer. He survived a violent childhood in communist Czechoslovakia. In the chaotic post-communist period, he graduated from a military academy, and then entered the world of elite protection services, where he often had to save his clients from the kind of violence they were inflicting upon others. In a surprising turns of events, Pavel discovered and identified with his Jewish roots during a visit to the Terezin concentration camp. This opened his eyes to the problems of ethnic bigotry, and he vowed to do his part in opposing the nationalist groups that were growing to prominence in the former eastern bloc countries in the 1990s.

He spoke to us about Terezin; a garrison town built in the late 1700s and later converted into a concentration camp and Jewish ghetto during the Holocaust. Although the camp was used as a transit camp and not as an extermination camp, tens of thousands of people died there. Some were killed outright, and others died from malnutrition and disease due to the cramped living quarters, lack of hygiene and medication, scarcity of food, improper heating, and other horrendous conditions.

Pavel also taught us about his childhood hero, Fredy Hirsch. Fredy was a German Jewish athlete, sports teacher and Zionist youth movement leader, notable for helping thousands of Jewish children during the German occupation of Czechoslovakia in Prague, Theresienstadt concentration camp, and Auschwitz. Hirsch was the deputy supervisor of children at Theresienstadt and the supervisor of the children’s block at the Theresienstadt family camp at Auschwitz II-Birkenau.

Because of his German extraction, charisma, and careful appearance, he was able to convince SS guards to grant privileges to the children, including exemptions from deportation and extra rations, which saved their lives at least temporarily. Hirsch and his assistants maintained clandestine education under difficult circumstances. Hirsch’s insistence on exercise, discipline, and strict hygiene reduced death rates among the children.

Pavel’s insightful, highly knowledgeable and sensitive approach to the complex history really brought the story of Fredy and Terezin to life. What a memorable way to start Yom Hashoah in Israel.

Daniela Kaplan said – I was in awe of the sheer encyclopedia of knowledge that Pavel possessed. He was able to capture the attention of his audience so effortlessly and effectively as he spun his story before us. It was truly an inspiring evening.

On Thursday, we were honored to attend a Masa event for Yom Hashoah at the education center at Yad Vashem along with hundreds of gap year students from various Masa programs. We began the day with activities run by Yad Vashem’s own guides and educators. The focus of the day was the liberation of the Jews from the concentration camps and life in the immediate aftermath of the war. Images were spread across the floor, the students had to choose a picture and talk about the dilemmas it raised. It really helped us understand the chronology of the end of the war and the struggles of the survivors to adjust. We had a short tour around the grounds of the museum to learn the story of Israel’s efforts to preserve the memory of the Shoah. In the early years of the State of Israel, it was common to talk about the number six million and so most of the memorials and sculptures are immense, large and anonymous. In contrast, today it is more common to preserve the memory of the individual. We stopped in the art museum located in Yad Vashem. The Museum of Holocaust Art, inaugurated in 2005, is located in Yad Vashem’s Square of Hope. The Museum’s rotating permanent exhibition displays some 120 works of art. Most of these works were created during the Holocaust itself, or before the war by artists later murdered during the Shoah. Many of the works of art on display were created in ghettos, camps, forests, and while in hiding. They depict the reality of life during the Holocaust, but at the same time provide a glimpse into the inner world of the artist. Despite the appalling conditions and the daily struggle to survive, the artists inventively overcame their lack of materials. Through their creativity, they reasserted their individuality and their will to live.

After the walking tour, we were privileged to meet two survivors who told us their personal experiences of the Shoah as well as the stories of their Aliyah to Israel. Both were so proud to be Jewish and their passion for Israel and their hope for the Jewish people was mind-blowing. With so few survivors left today, it was a privilege and honor for us to hear these survivors tell us their stories.

The day ended with a memorial ceremony in the Hall of Remembrance which included wreath-laying, candle lighting, saying the Kaddish and memorial prayers. In the ceremony, our program was honored by Masa and one of our students Gadiel Shepherd was chosen to light the eternal flame. We then sang HaTikvah and we all felt a sense of pride to be able to sing the Israeli national anthem in our Jewish State, something many unfortunately never had the chance to do.

Gadiel Shepherd said, “Today was a humbling experience where we heard a testimony from a Holocaust survivor and we attended a meaningful ceremony. I was honored to have the privilege of taking part in the ceremony in Yad Vashem and to preserve the memory of our ancestors who perished in the Shoah.”

Internship in the Spotlight Hannah Saban, “MDA was an amazing experience. I have never been good at school and never imagined myself doing the program as it involved an intense 10 days of 12 hours of classes each day and two tests at the end. I decided to try it because I have always been interested in the medical field. After thankfully passing the tests with ease, I began my shifts. The people I have worked with are both welcoming and patient, as well as professional when it came to the calls. I have enjoyed my time with MDA and I would recommend it to anyone who can deal with an intense experience like that. It’s amazing to help so many people from all around Israel, of all faiths and religions. In one of my shifts, I helped an Israeli celebrity who was in a motorcycle accident and when I took his blood pressure he flexed and I died inside . All in all, it was a fascinating experience.”

Next week we will focus our educational activities on the Memorial Day for fallen soldiers and victims of terror. We will join all the other Masa participants in a ceremony at Latrun and we will have a couple of activities to process these hard but yet so important days. 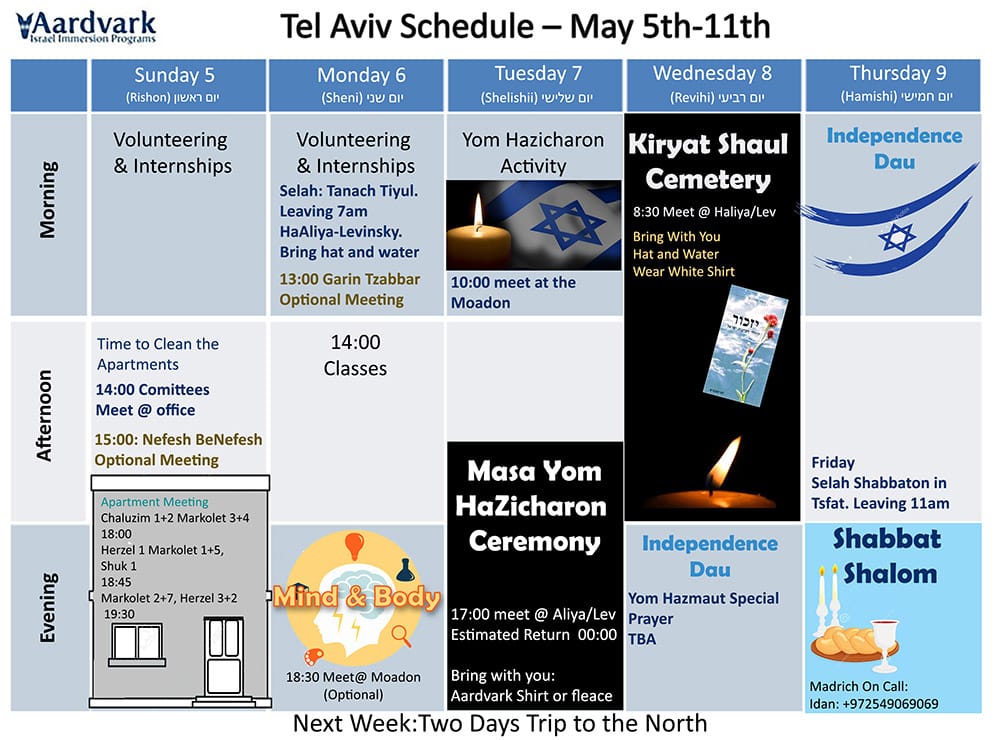