A Brief History of Israel’s Railways

During your gap year, you will probably take a train in Israel at some point. These days the train service is modern, relatively reliable and can take you around large parts of the country. However, the train service has undergone many stages of evolution over the last one hundred years or so.

The first railway to open was the Jaffa-Jerusalem line in September 1892. In those days, the trip took 3 hours and 30 minutes, which at the time would have been considered highly efficient. Twelve years later, in 1904 a second line was built, from Haifa to Beit She’an and then over the next decade the network grew to include Beersheba, a number of coastal towns and various other cities.

The network was further expanded when the British took over. In 1920 they established a company called Palestine Railways and built lines to include Petach Tikva, Rosh HaAyin, Lod and more. They also built lines running from Haifa to Beirut and Tripoli, and they dug the Rosh HaNikra tunnel, which opened up the possibility of rail travel from Lebanon as well as locations north, and west of Egypt.

After Israel was founded, Israel Railways came into being and took over the network. Much of the network was damaged in the War of Independence and some of it was left unrepaired for a significant period, such as the section in the Jezreel Valley. However, for the first twenty years or so, the trains were hugely popular and carried about 4.5 million passengers a year.

From the 1960s to the 1990s the use of the rail networks declined due to a lack of investment and improvements in the road structure. However, over the last two and a half decades, a huge amount of work has been done on the railways and they are once again growing in popularity. In 1996 there were 5.1 million passengers and this grew over tenfold to 59.5 million by 2016.

Israel’s rail network is still being improved and expanded. In 2001 work began on a high-speed rail link between Tel Aviv and Jerusalem. The project was set back a number of times but it is finally nearing completion and at the moment they expect it to open in March 2018. The train will take 28 minutes to complete the route, significantly faster than the old Ottoman line.

Recently construction was finished on a 23.5 kilometre line from Acre to Karmiel and there are plans to extend it to Qiryat Shemona. Furthermore, in 2011 the rebuilding and expansion of the aforementioned Jezreel Valley railway line began and it was completed in 2016. The line connects Haifa and Beit Shean and there is even talk of extending it to Irbid in Jordan to allow a direct train connection from Jordan to the Mediterranean Sea.

Train travel in Israel is improving all the time and you are sure to see signs of development while on your gap year. Furthermore, in addition to providing a convenient method of transport, you will also find that the trains are the perfect place to sit in air-conditioning and escape the summer heat. 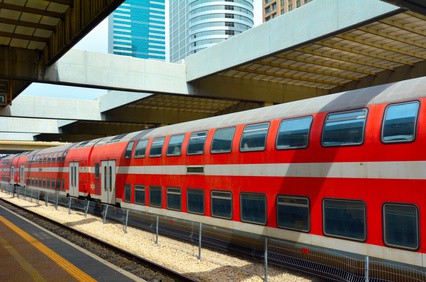