On are first day in Germany, we began our visit with a surprise, snow, a very pleasant surprise indeed. While we did not expect it, the students were happy to have a first-hand experience of the European winter.

After lunch, the group headed out to begin a tour of the City of Berlin museum. The tour started out in a bunker. The building was built in 1976 during the Cold War and the bunker was set up as a first come first served place of refuge. From the bunker the students explored the history of Berlin from the Prussians to the rule of the Bismarck from WW1 to the WW2. After that, we went to drink some coffee and took the train to our second destination.

We journeyed from airship hanger to tropical paradise, Berlin’s Tropical Islands. They are the largest self-supporting halls in the world, located in southern Brandenburg in Germany, an hour’s train ride from Berlin. The hangar was originally designed for large airships and was built for the company Cargolifter AG. Today they serve as a paradise for those who are looking for a tropical vacation.

The contract for the construction of the Tropical Islands was signed in August 2008. It took just nine months to transform the former hangar into Europe’s biggest tropical paradise. The concrete and construction equipment soon gave way to clear blue water, sandy beaches and idyllic palm trees. With its Tropical Sea, Lagoon and the authentic buildings of the Tropical Village, the Dome is now home to the world’s biggest indoor rainforest, Germany’s highest water slide tower and an enormous tropical sauna and spa complex, to mention just some of the attractions. The experience was amazing!!!

After we entered paradise, we went swimming in the blue waters of the lagoon and had dinner by the lake. We also said hello to a flamingo who swam next to us in the water.

Overall, it was a great start to the trip and everyone is happy (and tired). 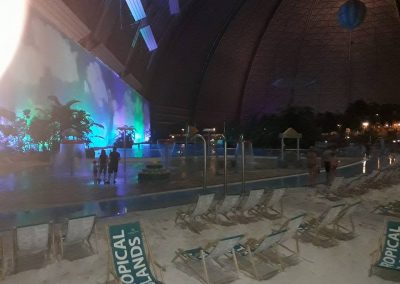 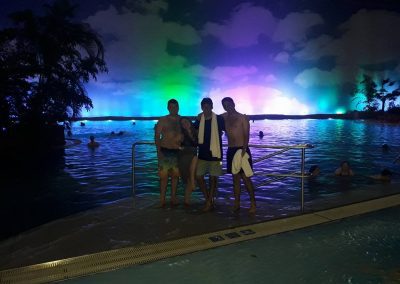 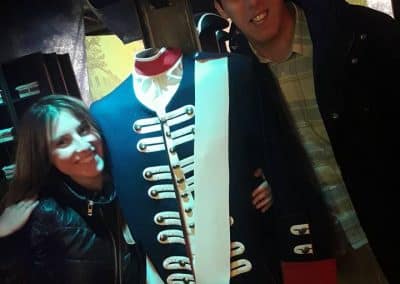 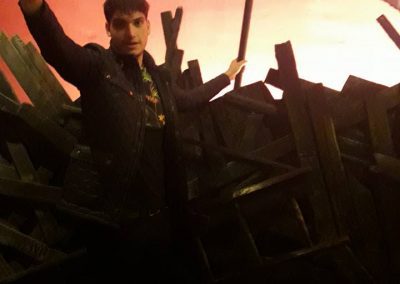 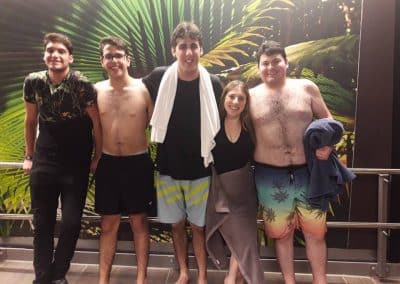 Today the group headed to the memorial for the murdered Jews of Europe. This site is a massive area filled with stone blocks. They start out shallow and low and as you move through the space they get taller and deeper. Although it is a memorial site, it is not uncommon to see people sitting on the blocks, children play between them, and although the architectural effect is intense, the atmosphere is less so. However, the memorial also includes a museum that had a completely different tone to it. As you walk through, you can hear the reading of names of victims and stories of the people who perished. This, coupled with the visuals, created the atmosphere you would expect at a Holocaust Memorial.

The memorial is located next to a huge park in the middle of the city and at the entrance to the park is the Brandenburg Gate. As the group walked through this massive stone arch, they learned about its history and significance. Today it is considered a symbol of the tumultuous history of Europe and Germany, but also of European unity and peace.

After lunch, we began our alternative tour of berlin. We went to the market in the city of museums, and walked alleys filled with graffiti paintings from local artists. We then went to the East Side Gallery where the students had the chance to walk the length of what remains of the Berlin Wall and view the murals that were painted on it by artists from across the world. The collection of images represents a huge range of topics, the students really loved seeing all the art and trying to decipher the political messages. In addition to our students, there were tourists from all over the world visiting the site and the students found it interesting to hear how many languages they were surrounded by.

For dinner, the students chose a local restaurant, located in one of the city’s colorful neighborhoods, full of students from all over the world, and real German food.

It was a good ending to our long day 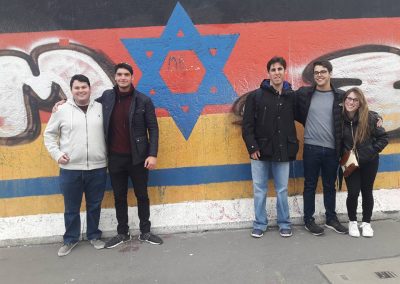 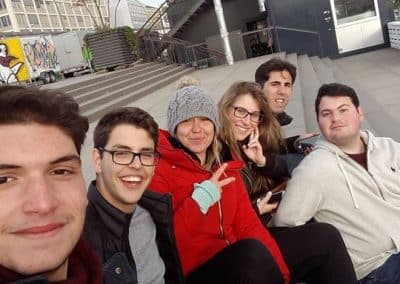 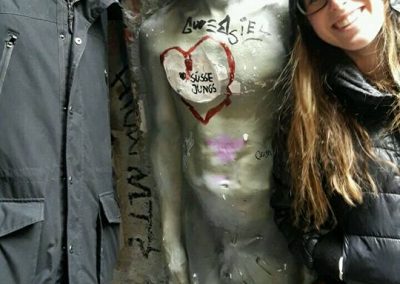 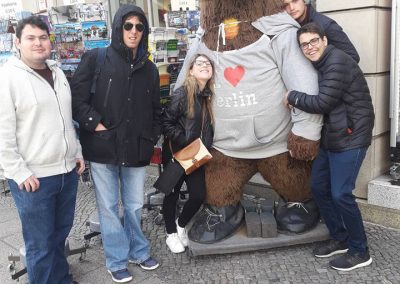 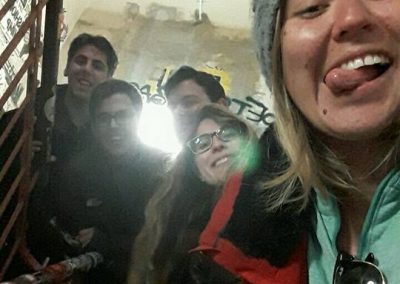 Another great day in Germany and it’s not over yet! This morning the group headed out early and started the day with a tour of the Reichstag. The building that houses the German Parliament is a fusion of the old and the new. There is a distinct blend of 19th and 20th century architecture and it was redesigned to accommodate both politicians and the public. The highlight of the tour is the ascension to the dome and terrace from which there is a 360-degree view of the city. The students loved the experience. Visitors walk up a spiral ramp and then down another spiral ramp so you are always looking out at the view of the city. In the center of the dome is a mirrored fixture that creates a cool effect. All visitors are given an audio guide and the students agreed it was amazing, interesting, and informative.

After lunch, we went to the Israeli embassy. There we met the Assistant Ambassador who told us all about their work in the biggest embassy in Europe (and the second biggest Israeli Embassy in the world.) Then we went to a team escape game that was a huge hit! The students had a great time, succeeded in solving the puzzles and freed themselves from the locked room. Had they lived in East Berlin before the fall of Communism, we’re sure they would have made it over to the West with no problem.

Next they walked over to Checkpoint Charlie, the best-known crossing point between East Berlin and West Berlin during the Cold War. The students found it interesting to see this historical site and imagine that in that same spot, Soviet and American tanks briefly faced each other.

We ended the third day with a form of entertainment that is hugely popular with Germans, of course I’m talking about a spa. Like many cold places in Europe, the Germans also love hot pools and masseuses and we enjoyed resting and rebuilding our energy for the next day.

In a travel guide about Germany, it says that following the “implosion of Germany’s history” Berlin became a city that is constantly “embracing change and pushing forward.” What the students saw and did today illustrated that very effectively.

The morning began with a tour of the former concentration camp Sachsenhausen. Just an hour from the center of Berlin, the camp was established in 1936 and operated through to May 1945. In addition to serving as a detention camp and later an extermination camp, it also became a training center for SS officers. Only 15-20% of the prisoners of Sachsenhausen were Jewish with the others detained there including criminals, Communists, homosexuals, Jehovah’s Witnesses, and gypsies.

After lunch, our destination was Alexander Platz, one of the largest shopping center in Berlin, there we did our final shopping and we were also able to see the tallest television tower in Europe.

Towards evening we had the privilege of going to a special event, as one of the biggest cities in Europe, the cultural scene in Berlin is a huge part of the experience. In order to emphasize that to the students we took them to see the “Blue Man Group” an alternative show filled of laughter, tears and emotion. In the middle of the show, one of the actors came out into the audience and made them a part of the show.

After dinner, we went to celebrate the birthday party of Uri Zejerman in a restaurant called “Tarantino”. The restaurant is dedicated to the legendary director and full of motifs from his films. It was an amazing ending to a long day. 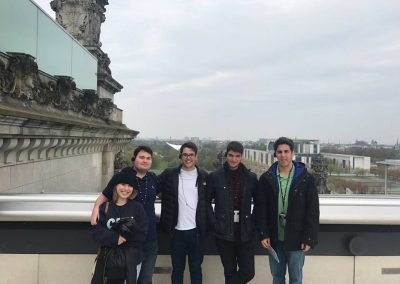 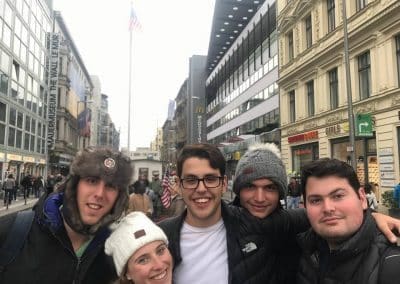 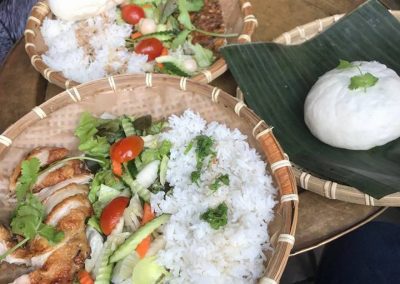 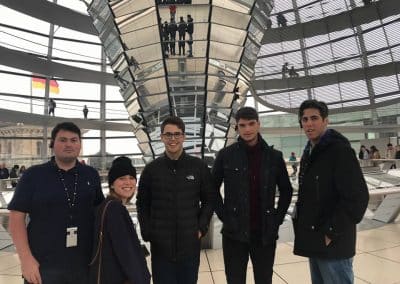